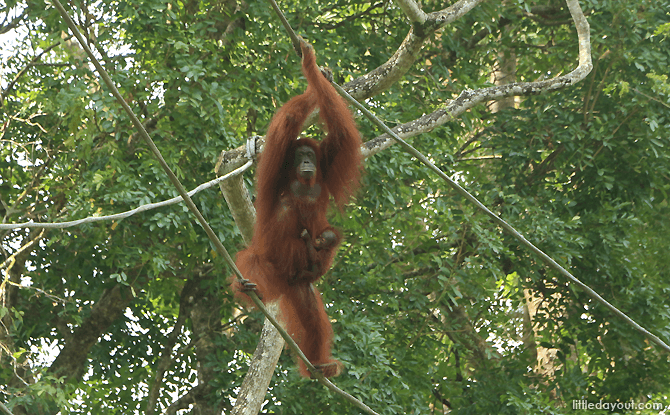 The Singapore Zoo has a special place in the hearts of generations of visitors. Home to more than 2,800 animals from over 300 species, the Zoo provides a wonderful way to encounter animals in naturalistic settings in the Mandai region of Singapore.

Singapore Zoo is designed to allow animals to roam around in open settings. Through exhibits with special features, visitors can come up close to its many animals, taking away wonderful memories of the day spent at the Zoo.

Young children love the Singapore Zoo because it allows them to view animals that would otherwise only be pictures in storybooks. Older children and adults learn to appreciate the biodiversity found in the world and the need for animal conservation.

Add on animal shows where visitors get charmed by the animal’s antics and it is no wonder that Singapore Zoo has a lasting place in local and overseas visitors memories.

Here is a guide to the many exhibits, zones and experiences at Singapore Zoo. 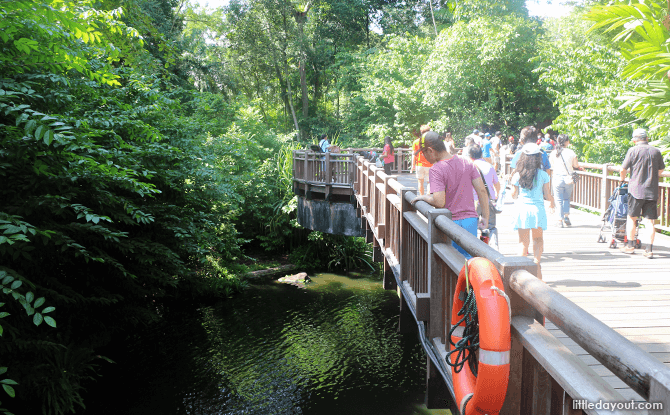 One of the first zones that you will come across upon entering Singapore Zoo is the Treetops Trail. It simulates a clearing in a rainforest and consists of an elevated boardwalk that takes visitors high above the jungle floor.

Animals at the Treetops Trail include the Siamang gibbon and the White-faced Saki Monkey. Peer down to the waters below the boardwalk and you can spot the False Gavial lurking in the jungle pond below. 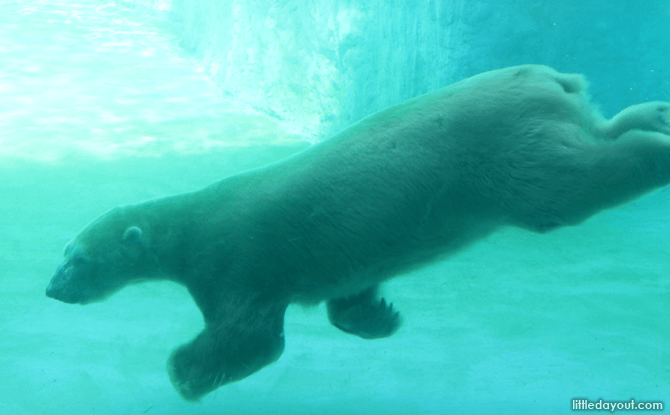 Venturing further to Singapore Zoo, you will arrive at the Frozen Tundra. This is home to Inuka, the locally-born polar bear who arrived on Boxing Day in the year 1990. Visitors can either view him at an outdoor pool or at his indoor, air-conditioned enclosure.

Inuka is not the only animal at Frozen Tundra.

Frozen Tundra is also home to a pair of raccoon dogs, a dog species found in North Asia and considered as bearers of good fortune by the Japanese.

There are also a pair of wolverines, part of the weasel family, at Frozen Tundra. Wolverines are scavengers and known to be fearless fighters willing to take on larger animals to scavenge a meal. 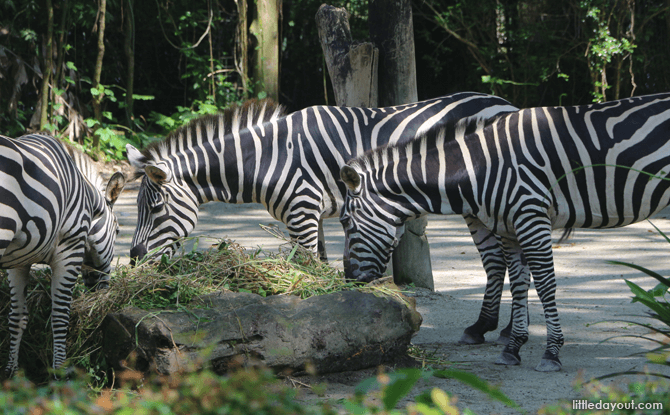 Experience the plains of the savannah at Singapore Zoo’s Wild Africa zone.

You can view the majestic White Rhinoceros, the second largest land mammal in the world. Neighbouring the White Rhino are Zebras with their distinctive black and white stripes. Also nearby are the Giraffes.

The apex predator of the African plains, the Lion, can also be found at the Singapore Zoo. The lions are located in the open enclosure opposite the giraffes and zebras.

Other animals at Wild Africa include meerkats and African painted dogs. 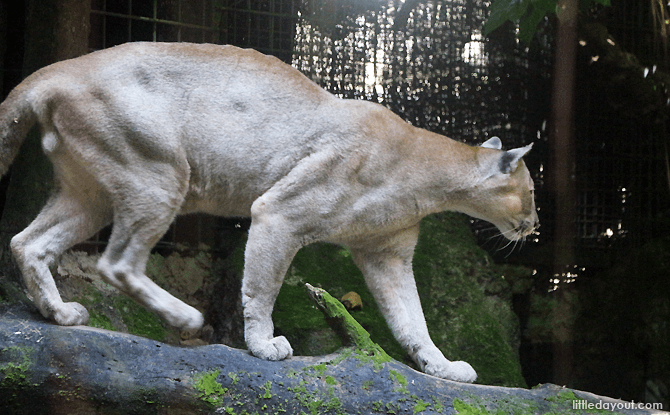 Close to Wild Africa is Cat Country, where you can view large predatory cats such as the leopard and puma. 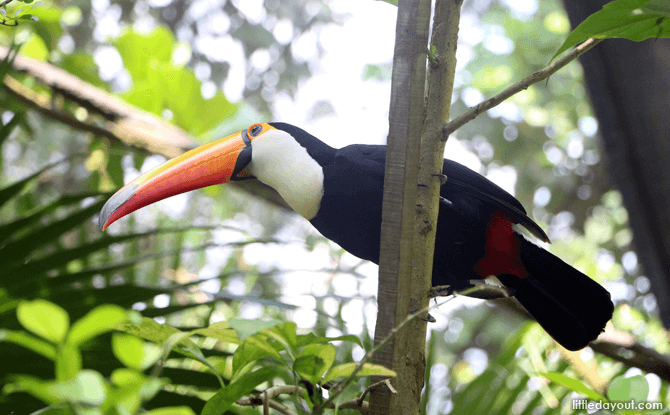 The Fragile Forest is a walkthrough enclosure where you can experience the flora and fauna of the rainforest.

Starting with an introduction to frogs and toads, creatures that dwell on the lowest layer of the rainforest, you can then trek up through the layers of the forest. Along the way, you will encounter birds flying overhead, crowned pigeons wandering through the undergrowth and ducks floating in a pond.

Keep an eye out for the Lesser Mousedeer moving stealthily through vegetation and ring-tailed lemurs with their distinctive striped tails.

At an elevated platform, get an intimate look at Malayan flying foxes feasting on juicy fruit before they take flight through the 20,000 cubic metre flight area of the Fragile Forest. 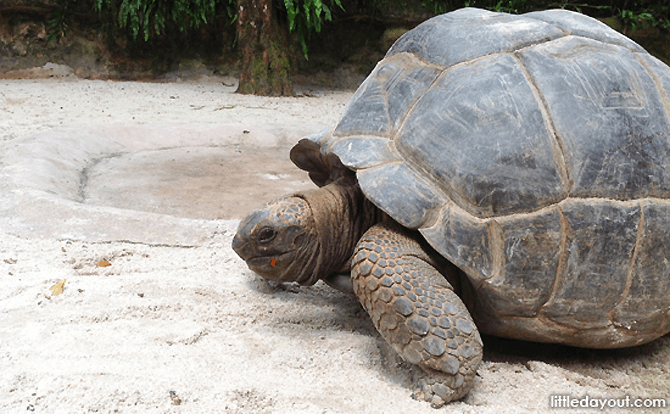 Located on a hill behind the Fragile Forest, Reptile Garden provides a look at reptiles, amphibians and other cold-blooded animals.

Come and see the largest lizard in the world, the Komodo dragon. Another highlight is the Aldabra giant tortoise. These humongous tortoises are natives of the Aldabra islands off the East coast of Africa. RepTopia, part of Reptile Garden, is home to an amazing array of cold-blooded creatures. Inside the air-conditioned exhibition area, visitor can meet colour-changing chameleons, crazy Gila Monsters, slithering snakes including the Gaboon Viper which has the longest fangs among snakes, poisonous dart frogs and many more.

Close to Reptile Garden is the Tortoise Shell-ter. This longhouse filled with tortoises serves as a sanctuary for endangered species such as the Radiated tortoise, Burmese star tortoise and the elongated tortoise. Nearby is Sungei Buaya, an exhibit that provides a submerged view of the massive Estuarine Crocodile. 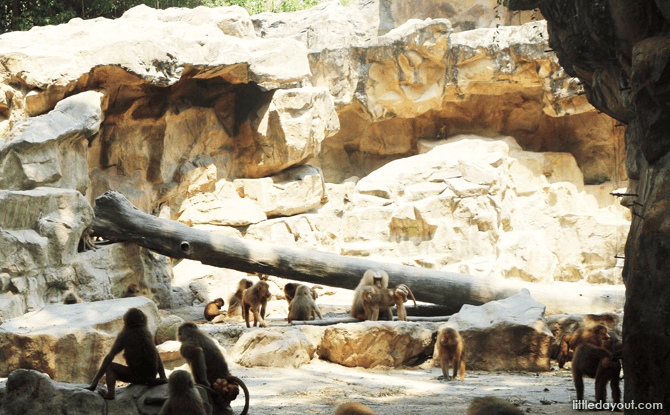 Wander around the Primate Kingdom and you will encounter the many species of primates that call it home. Each species has its own little kingdom in the form of an island.

Look out for the Patas Monkey, the fastest runner among all primates. There is also the Brown Capuchin monkey which is named for its hair which resembles a monk’s skull cap and the Douc Langur, an orange-faced monkey from Vietnam.

For an impressive view of a troop of baboons, stop by the Great Rift Valley of Ethiopia exhibit. Witness the social behaviour of tens of baboons as they feed, groom and play with each other. Meet the titans of land mammals at Singapore Zoo’s Elephants of Asia exhibit.

The exhibit is fashioned to look like a logging camp in Myanmar, providing a playground for the elephants to demonstrate their prowess. The elephants at Elephants of Asia are all female and from countries such as Malaysia, Indonesia and Sri Lanka. The stars of the Australasia zone are the Goodfellow Tree Kangaroos. Step into an indoor, air-conditioned viewing area to observe these tree-dwelling marsupials from Papua New Guinea as they laze around simulated tree branches.

Outside, you can spot grey kangaroos and wallabys in an open grassy area. Close to the Treetops Trail, you can view the Asian Small-clawed Otter. Its enclosure is designed to simulate the flowing rivers where otters make their home. You can view the playful otters from two levels, the open-air upper level and a lower tier that provides an underwater view of the otters. 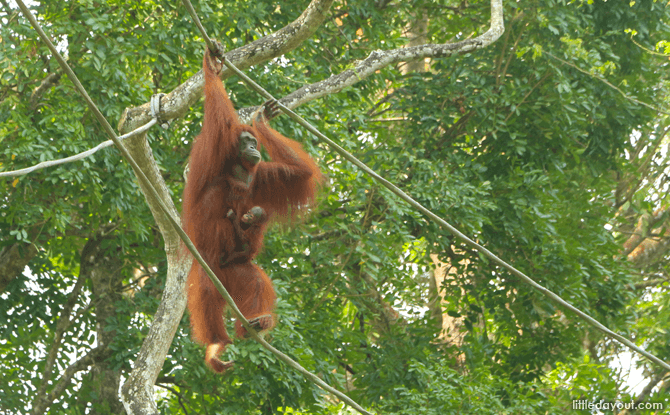 Meaning “man of the forest”, the orangutan is a great ape native to Southeast Asia.

The Singapore Zoo is home to two species of orang utans, the red-haired Sumatran Orang Utan and the darker-haired Bornean Orang Utan.

You can view the Bornean species at Orangutan Island which features an elevated boardwalk. The Sumatran Orangutan can be found at an exhibit fashioned like a traditional dwelling nearby. Named for the golden crest found on its chest, the Sun Bear makes its home in tropical forests in Southeast Asia and Southern China. The Sun Bear is the smallest bear in the world but don’t be fooled by its size because it is known to be a very fierce fighter when confronted in the wild. This unusual looking animal is a relative of rhinos and horses. Its black-and-white hide allows it to camouflage among the shadows of the trees found in dense lowland forests.

If you are lucky, you may even get a chance to see the Malayan Tapir upclose while it is taking a dip in the enclosure’s pond. Singapore Zoo’s White Tigers are housed in an exhibit designed to look like a jungle clearing. Visitors can view them from across a moat and learn about tigers an educational corner at the exhibit. 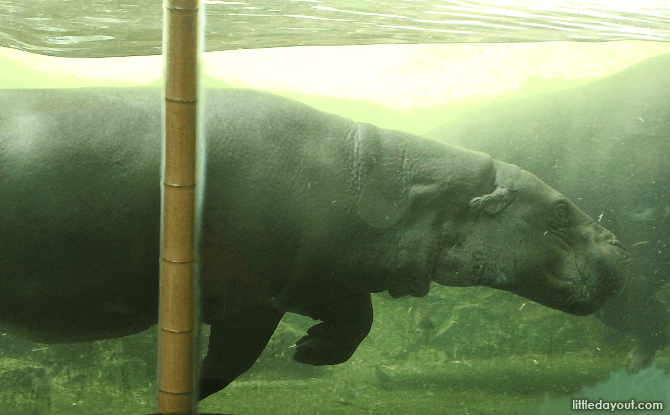 A native of West Africa, the Pygmy Hippo is a much smaller version of its cousin, the common hippopotamus. You can view these mammals at their enclosure where a special underwater channel lets you watch them bounce through the water on their toes. 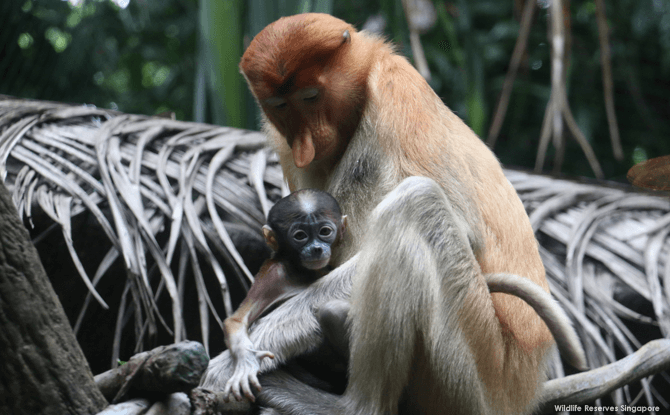 Once you see the Proboscis Monkey, it is evident where it gets its name.

The males have a huge nose or proboscis that is related to their social status. The larger the nose, the higher likelihood of being further up on the social ladder.

The Singapore Zoo has two collections of Proboscis Monkeys. One is located close to the Otter exhibit while the other is at the Fragile Forest enclosure.

There are four animals shows at Singapore Zoo. Each of these shows is held twice a day, once in the morning and once in the afternoon.

The star of this show is Singapore Zoo’s California Sea Lion.

You will be thrilled as the intelligent sea mammal demonstrates its skill and dexterity. The Splash Safari Show is held at the Shaw Foundation Amphitheatre at 10.30 am and 5 pm.

Trainers dressed as mahouts (traditional Southeast Asian elephant handlers) demonstrate how man and elephant are able to work together side-by-side. The Elephants at Work & Play Show is held at the Elephants of Asia Exhibit at 11.30 am and 3.30 pm.

Otters, snakes, macaws, monkeys and other creatures take to the stage in Singapore Zoo’s Rainforest Fights Back Show. The show highlights the diversity of the rainforest and the need for conservation.

Rainforest Fights Back takes place at the Shaw Foundation Amphitheatre at 12.30 pm and 2.30 pm.

Kids will love this animal show featuring domestic animals such as dogs and cats and the lovable antics they get into. The Animal Friends Show is held at Rainforest KidzWorld Amphitheatre at 11 am and 4 pm.

Token feeding sessions are held at various animal exhibits throughout the day. These sessions are a wonderful way to learn more about the animals from the zookeepers. Rainforest KidzWorld also has a wet playground that kids will love soaking in. It may seems strange to visit the zoo to see crops but the Tropical Crops section of Singapore Zoo provides a chance to view fruit and vegetables that city slickers would only otherwise see on a plate. You can see durians, gourds, chillies and more at Singapore Zoo’s vegetable patch by the water.

Where to Eat at Singapore Zoo

Before entering Singapore Zoo, there is a cluster of eateries that includes a KFC fast-food restaurant.

Once inside Singapore Zoo, there are three restaurants.

These two restaurants are found close to the Orangutan free-ranging area. Named after Singapore Zoo’s most famous icon, the Ah Meng Restaurant and Ah Meng Bistro serve hungry visitors throughout the day.

At the Ah Meng Bistro, the menu is deli style with pastries, sandwiches and hot food such as lasagna. Ah Meng Bistro is open from 10.30 am to 4 pm. Singapore Zoo also operates a tram that takes visitors around the park. The tram service has four stops.

The first station is located at the start of Wild Africa.

The second tram station is in front of Fragile Forest. This is the closest stop to Reptile Garden and Rainforest KidzWorld.

The third tram station is closest to the Ah Meng Restaurant and the Shaw Amphitheatre where the Splash Safari and Rainforest Fights Back shows are held.

The fourth tram station is closest to Elephants of Asia, Australasia and The Great Rift Valley of Ethiopia. From this tram stop, you can also make your way to view the White Tiger and Tapir exhibit.

READ: 6 Spots You Have Probably Missed When Visiting the Singapore Zoo