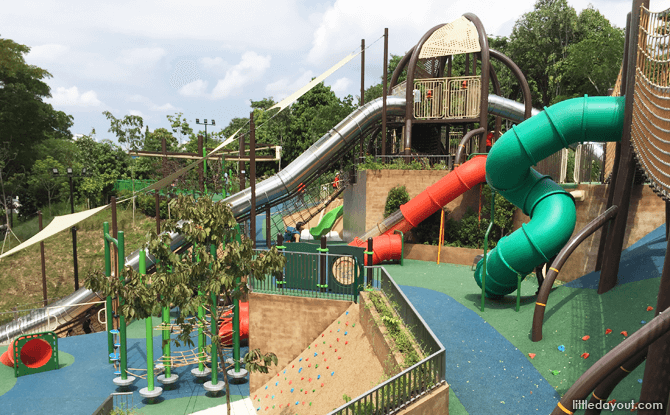 Admiralty Park offers visitors a chance to have two experiences in one location. Firstly, the Admiralty Park Playground takes advantage of the park’s hilly terrain, turning the area into a magical, multi-tiered playland filled with slides, burrows, bridges and more slides that children will go crazy over. Secondly, there is a nature area, with a mangrove boardwalk that brings you right down to the action.

Admiralty Park Playground is situated within the urban park section of Admiralty Park beside Republic Polytechnic, a 15-minute walk away from Woodlands MRT.

It caters to different age groups with exciting play equipment that makes use of the park’s slopes and hillocks. An unmissable feature of Admiralty Park Playground is its slides. In fact, there are 26 (yes, 26!) slides at the children’s playground, making it the park with the most number of slides in Singapore. 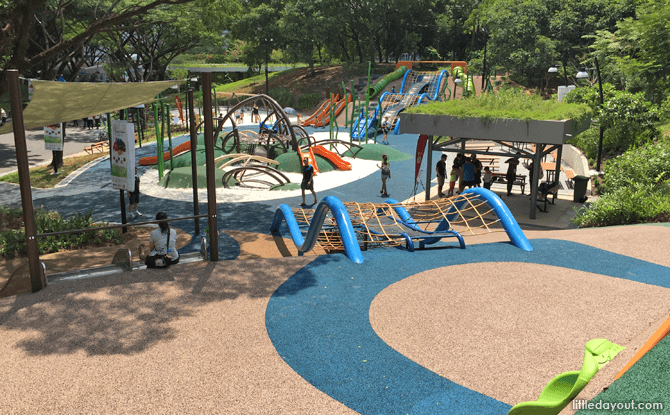 The first children’s play area, Junior Play is located closest to the junction of Woodlands Avenue 5 and Riverside Road. It is best suited for younger children between 2 to 5 years old.

However, this does not mean that it is short on adventure. Instead, there is plenty to keep kids occupied here.

Slides run down the slopes of two facing hillocks. Enclosed, green tube slides lead down from the highest point of the hill to an intermediate terrace where metallic open slides take over to bring kids down to the base of the slope.

Cargo nets strung between bright blue tubes provide a fun way for kids to make their way back to the top and do it all over again.

Alternatively, kids can hike up the slopes with the help of a series of footholds and climbing poles embedded into the slopes. In between the two hillocks at the Junior Play Area is a low mound with a sand play area. Tube tunnels burrow underneath while brown-and-beige poles pop-up from the mound like the roots of a mangrove tree. 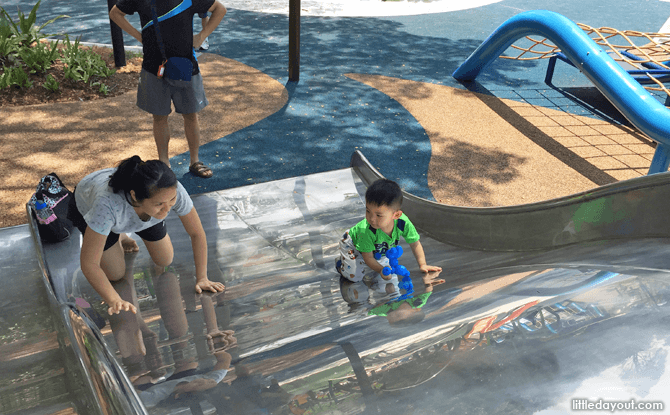 A highlight at the Junior Play area is Singapore’s first family slide. It is designed to be wide enough to accommodate up to a family of four sliding down together its gentle gradient at the same time.

Also at the Junior Play are is an Expression Swing. The first in Singapore, it allows parents and toddlers to experience the swinging sensation together and features a bucket seat and regular seat on the same swing – so that parents can watch their kids’ “expressions”! At 34 metres long with gentle curves, the Curved Roller Slide is the longest outdoor slide in a public park. Older children, between 5 to 12 years old, have plenty to be excited about at Admiralty Park Playground’s Family Terracing Play area. 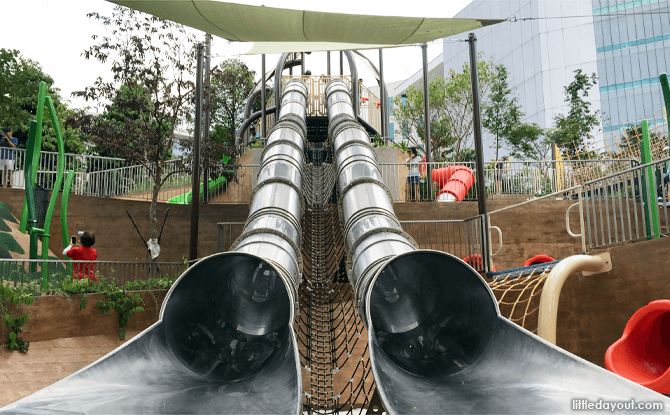 The highlight here is a pair of long, metallic tube slides that start from the top tier of the terraced slopes.

This Double Barrel Slides provide tons of gravity-driven fun. It is approximately 23 metres long and 9 metres tall. This makes it one of the longest and tallest tube slides in a public park in Singapore. Kids will have awesome fun going head-to-head racing each other to the bottom on these side-by-side slides. Who needs stairs when there are numerous orange tubes and cargo nets crisscross the hillside? These include slides that go through the ground. The variety of playground equipment provide a fun way to get from one level of the terrace to the next. 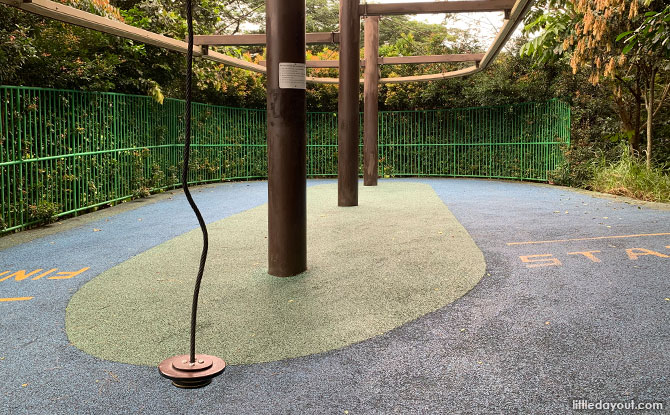 There is an oval zipline circuit too. The Waterfall Climber consists of red-and-yellow cargo nets stretched across a wavy blue frame appended to the hillside. Here, kids can practise their climbing skills as they scale these nets up the hillock. With so much to explore and discover around the Admiralty Park Playground, adventure awaits beckons kids and their families to this epic new family fun spot. It introduces new play concepts through equipment such as the family slide and swing and provides extreme play-fun with super-duper slides.

This children’s playground in the north is an exciting destination for families and fun-seekers. Admiralty Park’s nature area is centred around a river, Sungei Cina. This and the surrounding secondary forest is home to more than 100 species of flora and fauna. There are three bridges that span the Sungei Cina. These allow nature lovers to access both banks of the river. The bridges also serve as a vantage point to look out for wildlife in the river.

Among the wildlife that you may encounter along Sungei Cina include the Malayan Water Monitor and the long-tailed macaques, which have even been spotted swimming in the river.

Walking along the west side of the river, you will be taken under a canopy of trees with a well-paved path. At the northern end of Admiralty Park is one of its key nature attractions, a mangrove swamp and a boardwalk. You can get a look at the mangrove swamp from the bridge.

On one side of the bridge, you can view a muddy flat while the other is a pond with a waterway that leads on towards Woodlands Waterfront and the coast.

However, that is not the only vantage point from which you can get a look at the mangroves. For a better view, head along the Mangrove Boardwalk. This mangrove boardwalk will bring you right down to the edge of the swamp.

These include buttress roots, knee roots, pencil roots and prop roots. The last is the inspiration for the park’s playground’s design. See if you can spot a hidden “waterfall” pouring out from a drainage pipe too.

The nature area is a loop, so you can head back to the urban section of the park via the track on the east bank of River Cina. 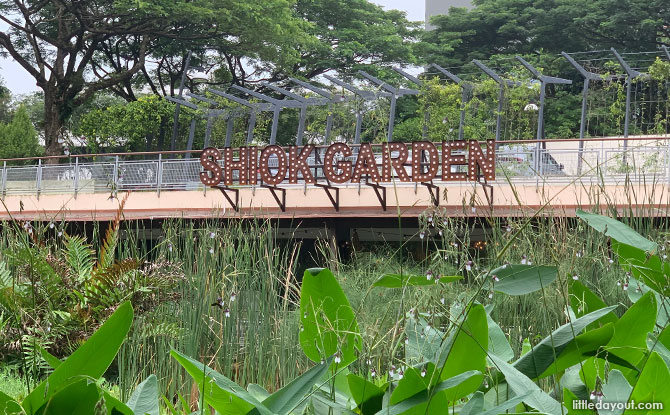 Admiralty Park also has a restaurant, found in between the playground and the nature area.

The is also a small exercise at the southern end of the park.

READ: Different Types of Slides You Will Find at Admiralty Park

RELATED: 15 of the Best Outdoor Playgrounds in Singapore