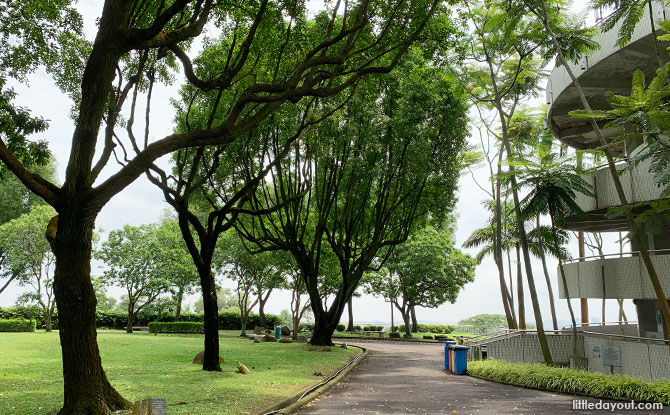 Visitors to Jurong Bird Park may have noticed the road leading upwards next to the park entrance and wondered what lies beyond. The answer is Jurong Hill Park, an off-the-beaten-path location which famous people once visited while in Singapore and now a quiet park with a spiral lookout tower.

Once upon a time, Jurong Hill was known as Bukit Peropok. It was the highest point in Jurong and in 1968, the Jurong Town Corporation decided to convert it into a park. Jurong Hill Park’s most famous feature, the Lookout Tower, opened in 1970. This all pre-dates Jurong Bird Park which opened on the western side of the hill in 1973.

Today, a visit to Jurong Hill Park feels like a step back in time. 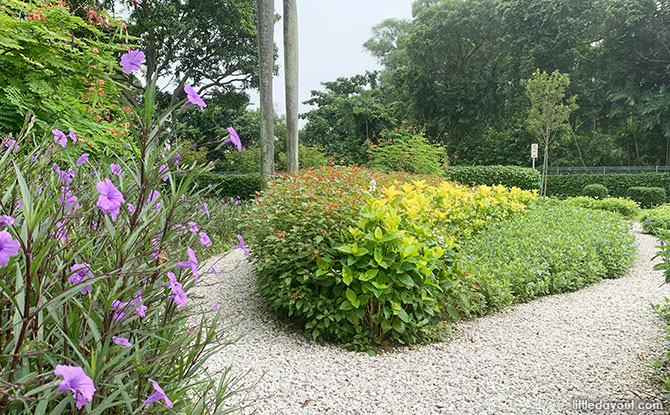 There are two levels at Jurong Hill Park. The first is mainly a car park with a set of restrooms. Besides these, there is also a little garden that you can take a walk through. 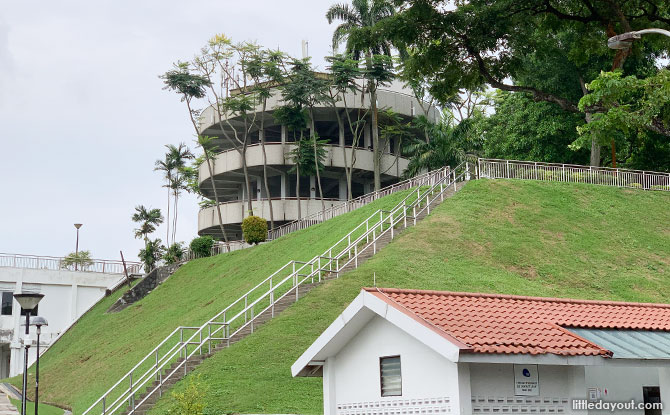 From the lower level, you can see the Lookout Tower beckoning. It is another flight of stairs up to the higher level or a drive up the slope to get to it. 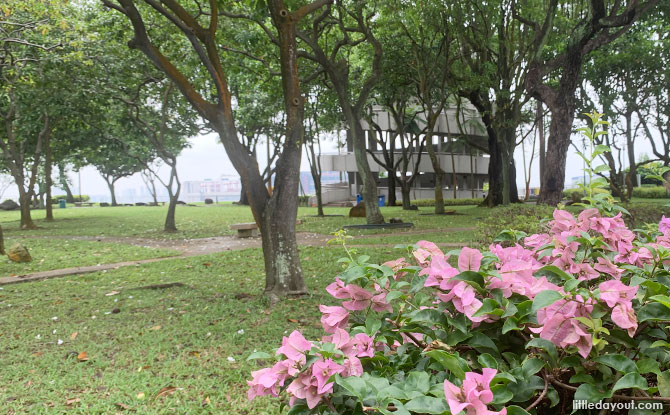 While main feature at the Jurong Hill Park summit is the Lookout Tower, it is also home to a Garden of Fame which is worthwhile spending some time exploring. 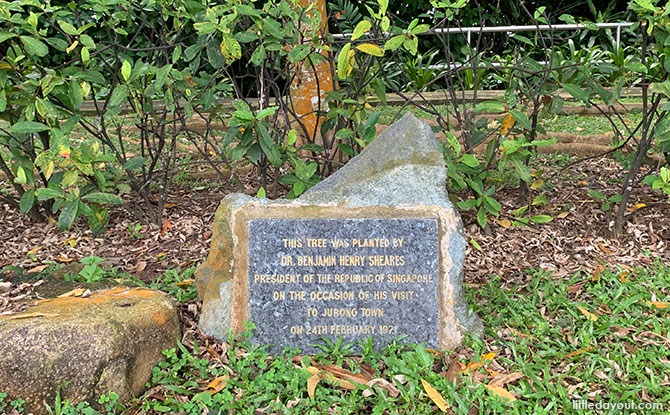 From 1969 to 1984, foreign dignitaries and heads of states were invited to plant trees at Jurong Hill Park’s Garden of Fame. In total 30 trees were planted.

The first was by Princess Alexandra of the United Kingdom in 1969 and the last was by Singapore’s economic advisor Dr Albert Winsemius in 1984.

You can try identifying the various trees from the plaques at the base of each tree. 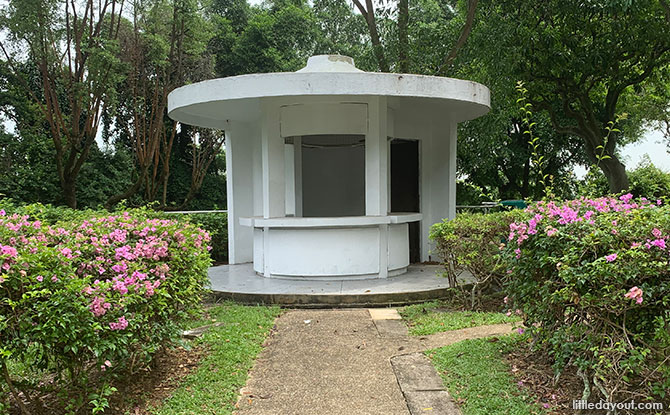 Besides tree-spotting, the secluded nature of Jurong Hill Park means that you are likely to have the park almost to yourself. Quaint structures such as an old concession kiosk give it a 1970s vibe.

This grey-tiled tower was officially opened on 22 June 1970 by then-Minister for Social Affairs Othman bin Won. 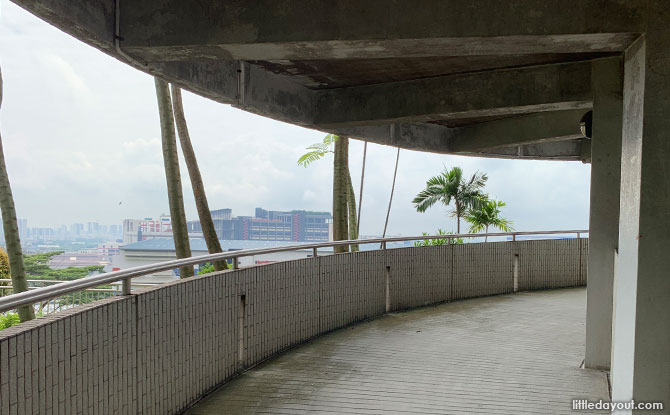 It has broad ramps which spiral three levels upwards. 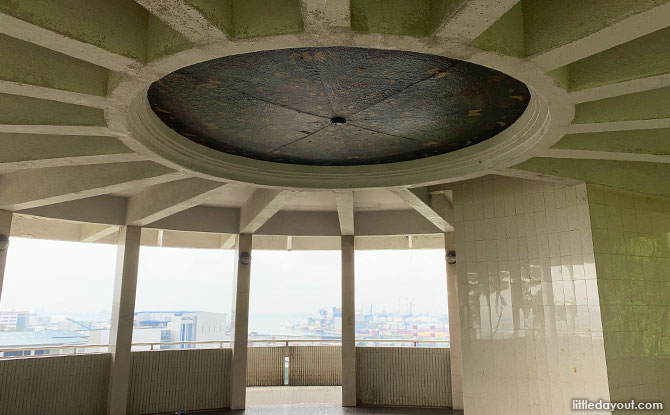 You can take in the view of Jurong Island in the distance – a testament to how much Jurong has developed over the last 50 years. 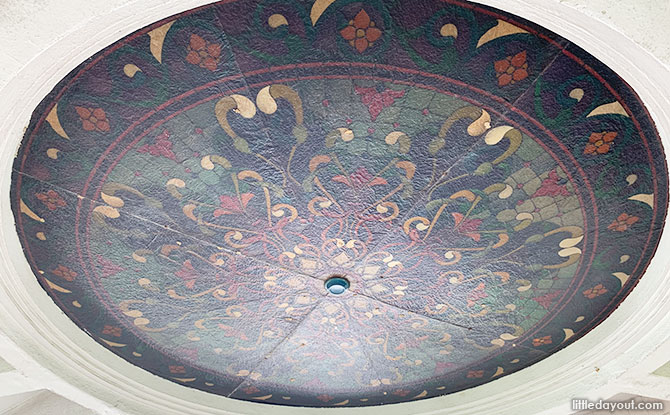 The top of the Jurong Hill Lookout Tower has decorative stained glass set into the ceiling.

The base of the tower has a space which once housed a popular teppanyaki restaurant.

Even as the area around Jurong Hill Park has changed, the park itself seems to have stood still in time. This makes it almost like a time capsule you can visit to head back in time, just for a little while at least.