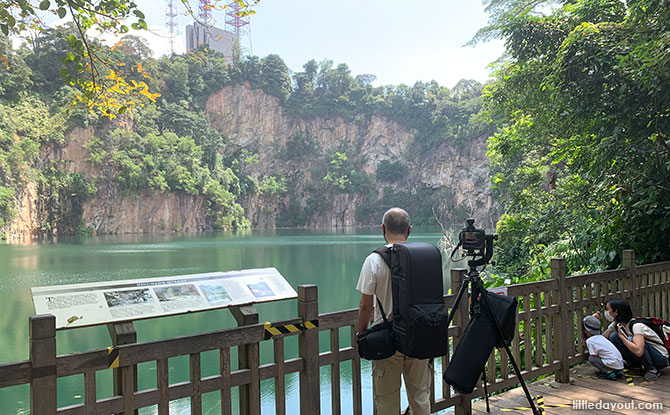 When one thinks of Bukit Timah Nature Reserve, the first thing that comes to mind is the long steep paved road heading up Singapore’s tallest hill. However, there is a much more family-friendly, often overlooked destination at the foot of Bukit Timah Hill – Hindhede Nature Park. 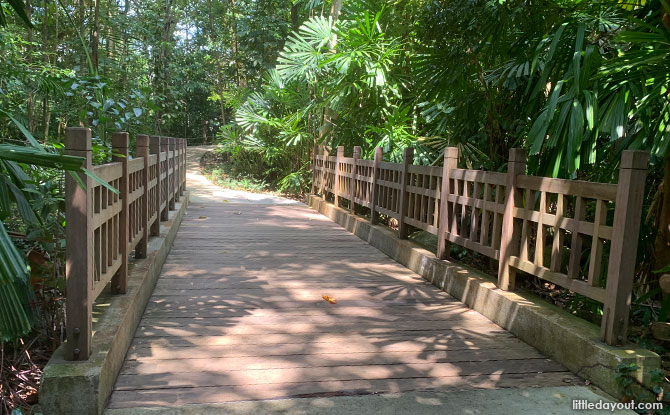 The Hindhede is a Danish family name (roughly pronounced “hin-d-her”) and the Hindhede Quarry at Bukit Timah Hill was named after Danish civil engineer Jens Hindhede.

The Hindhede Nature Park opened in 2001 and, in contrast to the more popular, steep route to the summit of Bukit Timah Hill, was designed for families with young children. Its short trail starts from the Visitor Centre and runs in a loop to the Hindhede Quarry only 90 metres away.

The starting point for Hindhede Nature Park is tucked away behind the Visitor’s Centre. As most people usually charge toward the summit, missing the park, it is usually quiet. 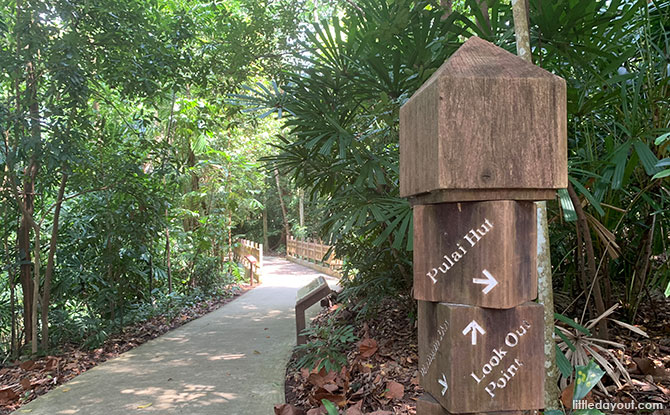 What makes it family-friendly are its gentle inclines and wide paths. 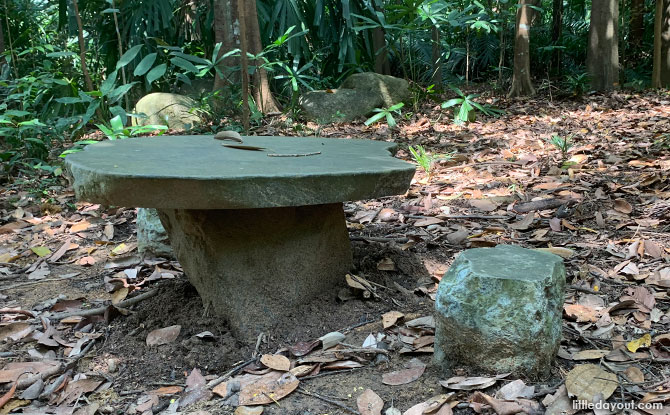 There is a picnic area, and even a kid-sized picnic table. This makes Hindhede Nature Park a nice spot for families, even those with kids still in prams, to take a pleasant and easy walk.

Oh, and it has a playground too. 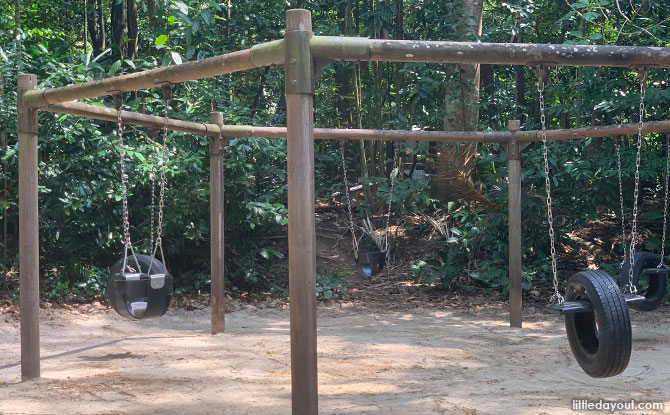 The Hindhede Nature Park playground includes a hexagon of swings and climbing nets. 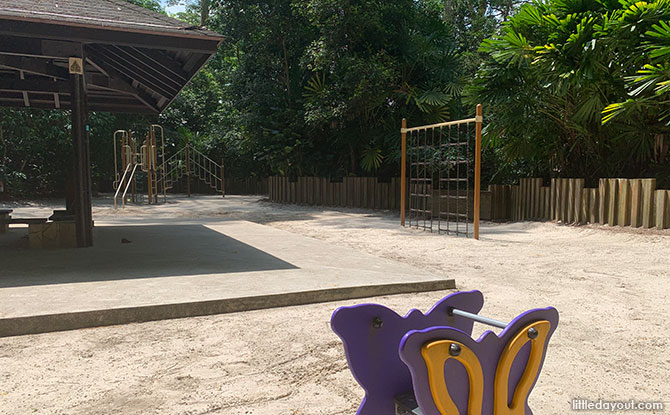 The play area is built on two sand pits, around the Waringin Hut. 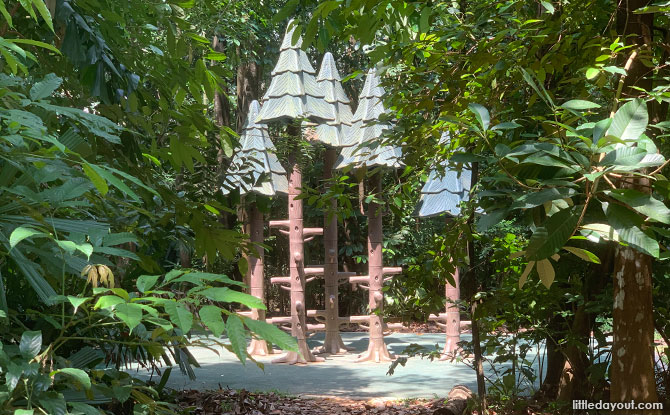 In a clearing nearby, there is an unusual set of climbing poles designed to look like trees. 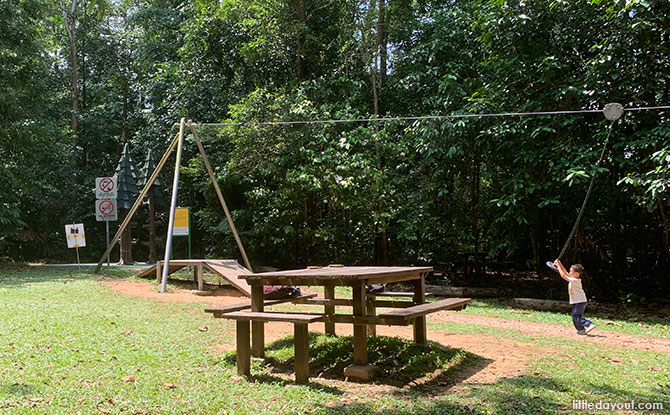 A fun zip line can be found in an open lawn with picnic tables nearby. Do take note that the zip line ends off rather abruptly at the end. Therefore, it is only recommended for children who are able to hang on tightly and brace for the sudden jerk at the end.

A less well-known secret about Hindhede Nature Park is that there used to be an adventure playground at the park. This was still accessible up to 2013. Two slides used to lead off from the main children’s playground downhill along the terrain. 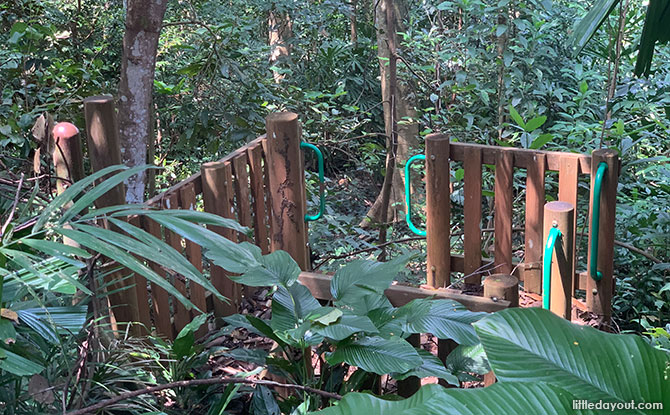 Vegetation has overgrown these sections and this section of the playground has been boarded up for safety. Make sure the kids don’t head down that way.

At one time, there was even a rope bridge at Hindhede Nature Park.

Look Out to the Hindhede Quarry 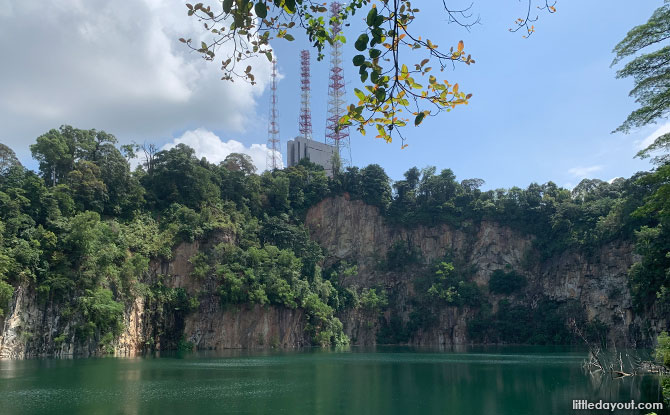 The Hindhede Quarry is a highlight of any visit to the Hindhede Nature Park. Granite mining in the quarry took place in the 1900s and ended only in the 1980s. From the lookout point at the far end of the trail, visitors can admire the now flooded quarry with its open escarpment.

Kids will have fun looking out into the water for terrapins and fish, with the occasional brightly-coloured bird flying by over the water.

The disused quarry is also a favourite haunt of birders, armed with their cameras and hoping to take a shot of the woodpeckers that live in the area.

Head into the Nature Park 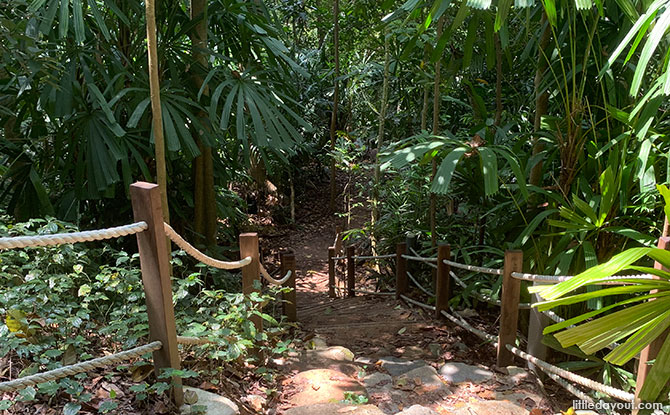 The more adventurous who want to head off the paved track can explore the little forest paths found at Hindhede Nature Park. These little paths lead downhill from the main path into the jungle. Even though not paved, they are well-marked and easy to follow, quickly leading back to the Bukit Timah Nature Reserve car park.

Quick Tips for a Visit to Hindhede Nature Park

Here are some tips for those thinking of visiting the Nature Park:

1. Visit in the morning or late afternoon when the weather is cooler.

2. It takes around 30 to 45 minutes to make a loop through the Hindhede Nature Park.

3. Amenities such as toilets can be found at the Visitor Centre.

5. Put on some insect repellent.