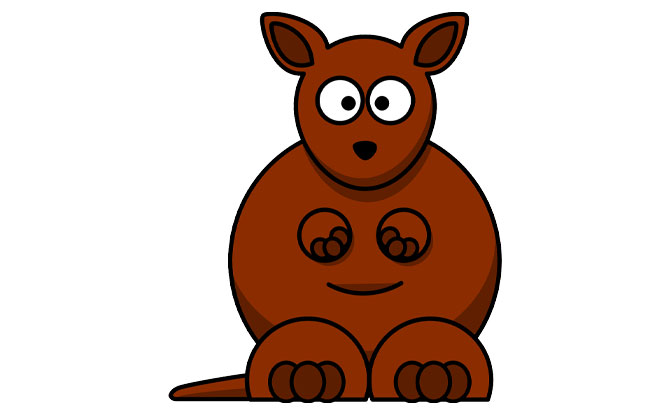 Looking for some mar-super-ial jokes? There’s nothing quite like this list of funny kangaroo jokes to get a kick out of. 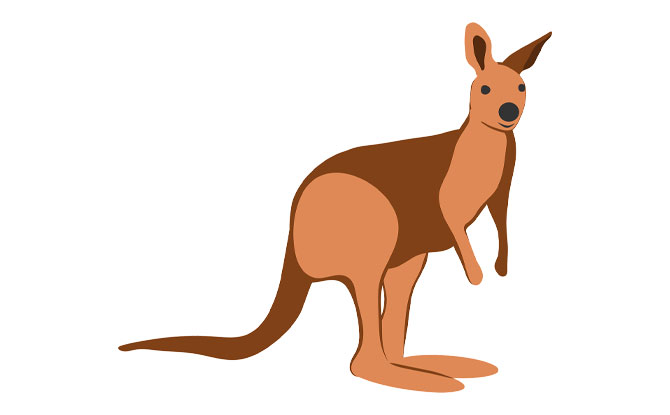 1. What do you call a kangaroo that asks for seconds on ramen?
A more-soupial

2. What do you call a lazy baby kangaroo?
A pouch potato.

3. What do you get when you cross a sheep and a kangaroo?
A woolly jumper.

4. Why were a bunch of kangaroos arrested?
Because they were involved in gangaroo activity.

5. What do stylish kangaroos wear?
Jumpsuits.

6. What do you call a kangaroo that’s exhausted from trespassing?
Out of bounds.

7. What do you get when you combine a kangaroo with a donkey?
A Kick-Ass.

8. What did the kangaroo say while volunteering at the soup kitchen?
More-soup-y’all?

9. What do you get if you cross Godzilla with a kangaroo
Big holes all over Australia.

10. What do you get if you cross an elephant and a kangaroo?
A sternly worded letter from the ethics committee and your funding revoked.

12. What did the train conductor say to the kangaroo?
“Hop on!”

13. Why are Kangaroos only qualified to be teachers?
Because they’re Kangurus

14. What’s something a kangaroo has that no other animal has?
Baby kangaroos.

15. Did you hear about the beer made entirely out of rabbits, frogs and kangaroos?
It’s mostly hops.

16. Why does a momma kangaroo hate the rain?
Because on those days the kids have to play inside

17. What do you get when you cross a kangaroo with an alien?
A mars-upial

18. What does a kangaroo get if it hurts itself really badly?
A hop-eration

19. What does a kangaroo do when it gets Covid?
Goes to the hop-spittle.

20. Who has better beer: Rabbits or Kangaroos?
Kanagaroos. While they both do great with the hops, Kangaroos just have a little more kick.

21. What kind of music do sophisticated kangaroos listen to?
Hopera.

22. Why did the kangaroo cross the road?
It was hopping mad.

23. What animal jumps when it walks and sits when it stands?
A kangaroo.

25. How does a kangaroo win a gold medal?
In the long jump.

26. What is A criminal group of kangaroos called?
A Gangaroo.

27. What do you call two kangaroos who live together?
Roo-mates.

28. What do kangaroos play at the playground?
Hopscotch.

29. Did you hear about the kangaroo with glasses?
He had to go to the hopthalmologist.

31. How does a kangaroo pick his favourite baseball team?
He jumps on the bandwagon.

32. What is a kangaroo’s favourite season?
Spring!

33. In Australia they use kangaroo broth to make
Marsoupial

34. What do you call it when a marsupial tricks you?
A kanga-ruse.

Kangaroo puns and jokes to get a kick out of 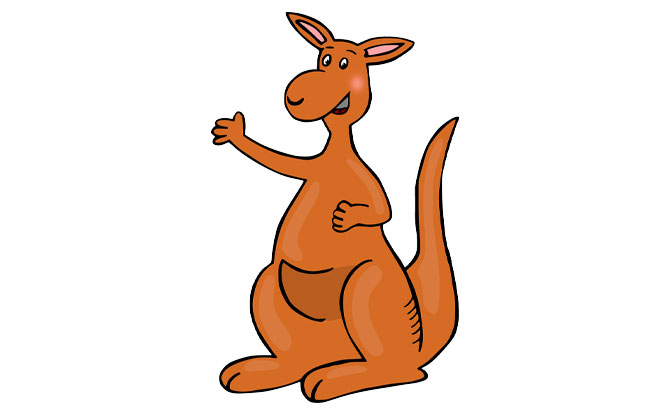 40. Man sees a kangaroo sitting in a movie theatre.
“Are you a kangaroo?” asked the man, surprised. “Yes.” “What are you doing at the movies?” The kangaroo replied, “Well, I liked the book.”

41. A mother kangaroo and her baby pass through airport security.
The security guard says, “Sorry ma’am, but you need to take EVERYTHING out of your pocket before you get on the plane.”

42. A kangaroo is jumping around in Australia
Whenever she stops a little penguin pocks his head out of her pouch.
In Antarctica a little kangaroo is sitting with some penguins, sneezing and grumbling: “I hate this stupid exchange program.”

43. A kangaroo, a dolphin, and a snake walk into a bar.
That’s all, it’s just kinda funny since none of them actually walk.

44. A kangaroo hops into the bar, the bartender, says “sorry we’re closed”
The kangaroo says, “I thought you needed a bouncer”

45. An Australian man and his kangaroo walk into a bar, and spend the night drinking shot after shot. After a few hours, the kangaroo passes out and slumps to the floor. The man goes to pay his tab and starts to leave. The bartender shouts “Hey! Are you just going to leave that lying there?” The man turns back, glances at his drinking companion, and says to the bartender, “That’s not a lion. That’s a kangaroo.”

46. A kangaroo walks into a bar and orders a beer. He pays with a twenty and the bartender figures, “What does a kangaroo know about money?” gives him a dollar in change. Then his curiosity gets the better of him. “You know,” he says to the kangaroo, “we don’t get a lot of kangaroos in this place.” The kangaroo replied salty, “Yeah, and at $19 for a beer, you won’t be getting many more.”

47. Yesterday I kidnapped a baby kangaroo.
I got arrested in charge of pickpocket

48. A kangaroo at the zoo kept getting out of his enclosure every night.
Knowing that adult kangaroos could hop very high, the zoo officials replaced the eight-foot fence with a ten-foot fence.

He was out the next morning, just roaming around the zoo.

He was out again the next morning.

A twenty-foot fence was put up.

Again he got out.

When the fence was forty feet high, a camel in the next enclosure asked the kangaroo,

“How high do you think they’ll go?”

The kangaroo said, “About a thousand feet, unless somebody thinks to lock the gate at night!”

49. A spider a snake and a kangaroo walked into a bar
it was a normal day in Australia

50. There he meets an Aussie farmer and gets talking.
The Aussie shows off his big wheat field and the Texan says, “Oh! We have. wheat fields that are at least twice as large.”

Then they walk around the ranch a little, and the Aussie shows off his herd of cattle.

The Texan immediately says, “We have longhorns that are at least twice as large as your cows.”

The conversation has, meanwhile, almost died when the Texan sees a herd of kangaroos hopping through the field.
He asks, “And what are those?”

The Aussie replies with an incredulous look, “Don’t you have any grasshoppers in Texas?”

52. A criminal sets up a small souvenir shop in Australia selling glass Kangaroos as a front for his drug smuggling business. The detective working the case walks in and says: “I can see straight through your roos mate”