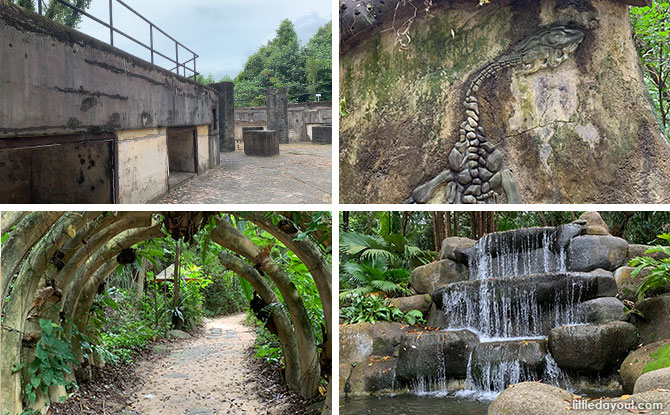 Sentosa’s Imbiah Lookout is where passengers disembark from cable cars, can view the waxworks at Madame Tussauds Singapore and hurtle themselves downslope on a luge. However, just a short distance from the busyness of Imbiah Lookout is a hidden side to Mount Imbiah known to few – the Imbiah Trail and nature area.

The Mount Imbiah Trail has been around ever since Sentosa first opened to the public in the 1970s. It snakes around Mount Imbiah, breaking the summit at a “whopping” 65 metres above sea level.

The hill was once used by British as screening point for passing ships and was armed with coastal artillery guns. Nowadays, is it a quieter spot where hikers can take an easy walk.

What to See at the Mount Imbiah Trail, Sentosa 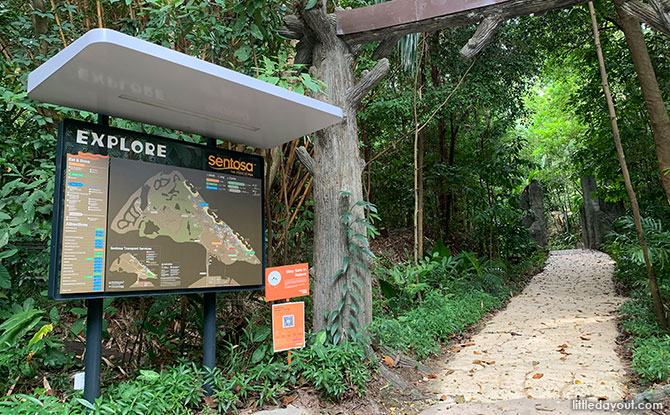 Mount Imbiah welcomes those who wish to experience a different side of Sentosa. Away from the booming beaches and bright-light attractions, the Imbiah Walk is an extension of the Sentosa Nature Discovery attraction. You will find easy paths, some paved, some dirt track, going up and down the hill. 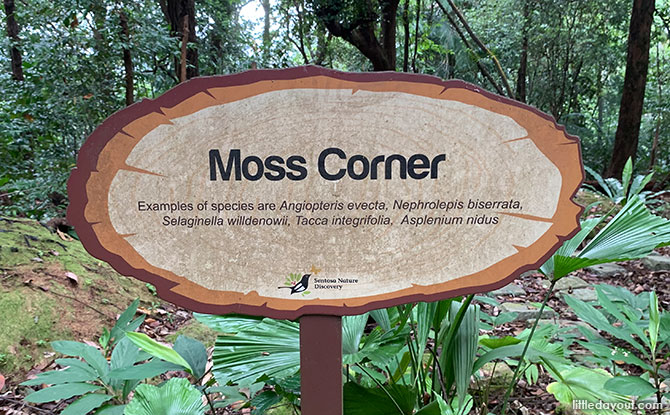 Keep an eye out for various spots along the trail, like the Moss Corner. There is also the Imbiah Falls, one of several waterfalls along the trail. 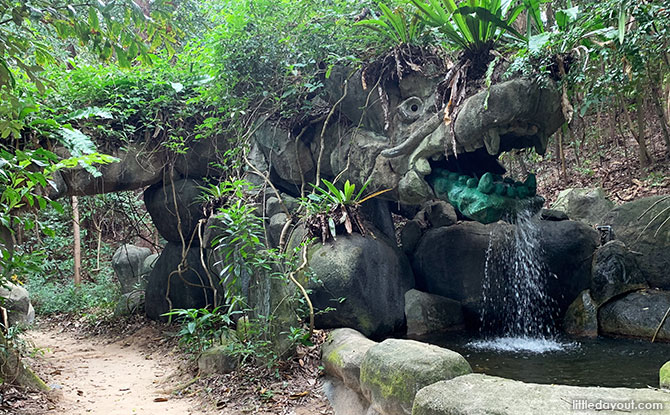 As you make your trek on the Mount Imbiah Trail and nature walk. Don’t be surprised if you stumble across a dragon along the Imbiah Trail – a rock dragon that is.

This pile of rocks resembles a sleeping dragon, hidden into the hillside. It has been lulled into dreamland by the sound of water pouring out of its mouth. 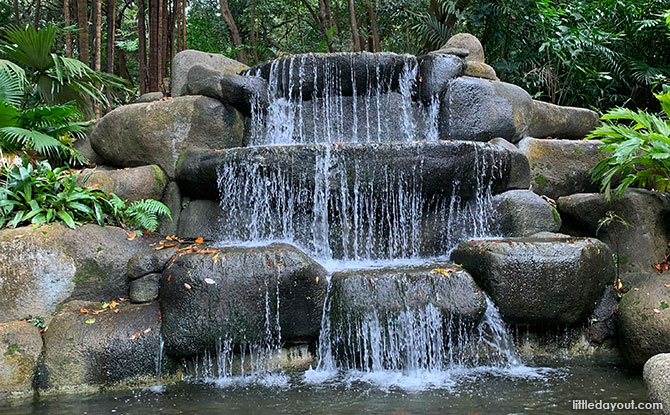 Another waterfall along the Imbiah Trail is what was once known as the Tempinis Cascade. It was named for the Tempinis tree that can be found just opposite the falls. The tree is also what gave the Tampines housing estate in the East its name. That’s why it is pronounced TAM-PEE-NEES instead of TAM-PINES? 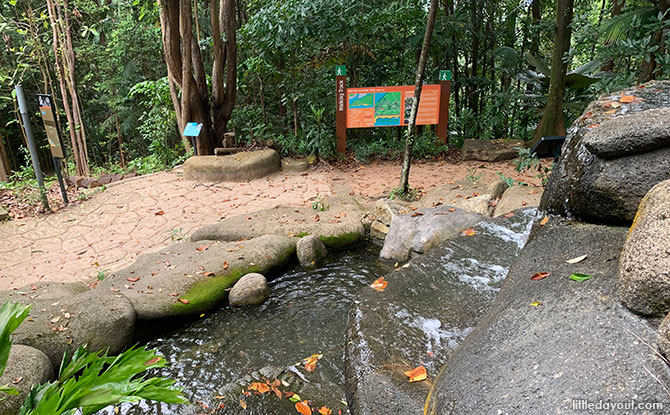 Those who are adventurous can even try and venture to the top of the waterfall using a little path on the right hand side. 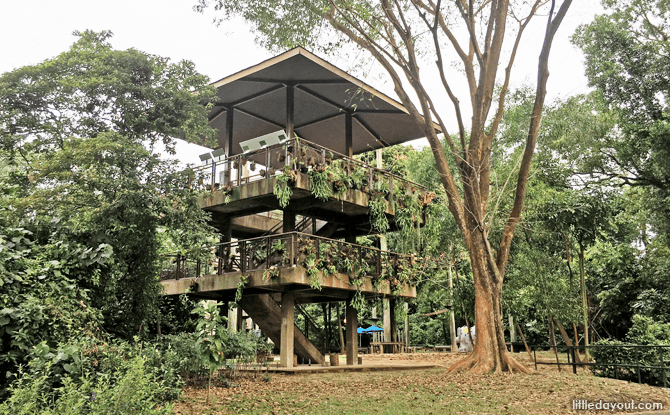 Also at the summit of Mount Imbiah is a 10-metre tall bird watching tower. You can climb up the three-storey tower to get a birds-eye view of the cable cars sailing past. 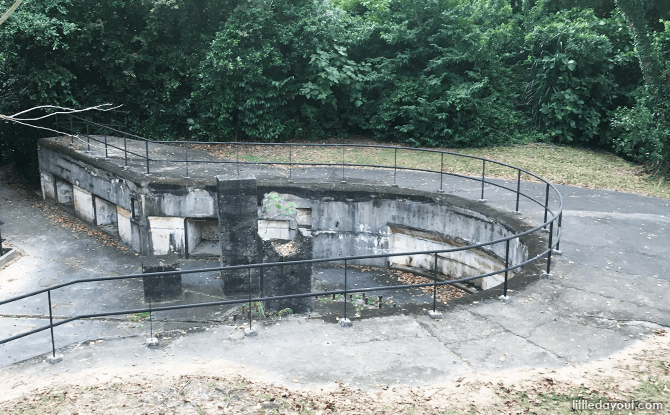 The remnants of a gun emplacement for a 9.2-inch coast defence gun can still be seen at Mount Imbiah’s summit. The battery was built in the 1880s and, along with the guns at Fort Siloso, served as part of the coastal defences of Singapore. 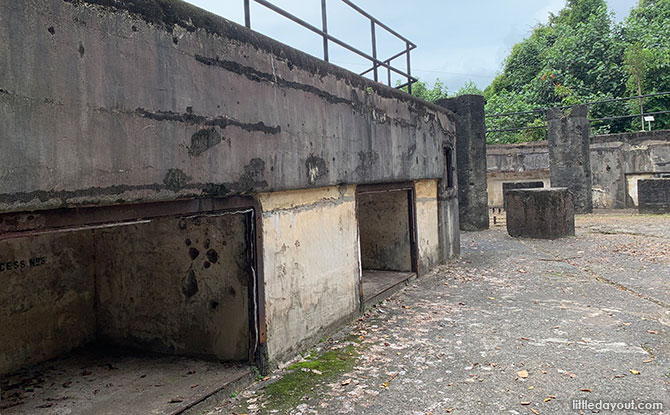 The gun was dismantled in the 1930s and the Mount Imbiah battery abandoned. 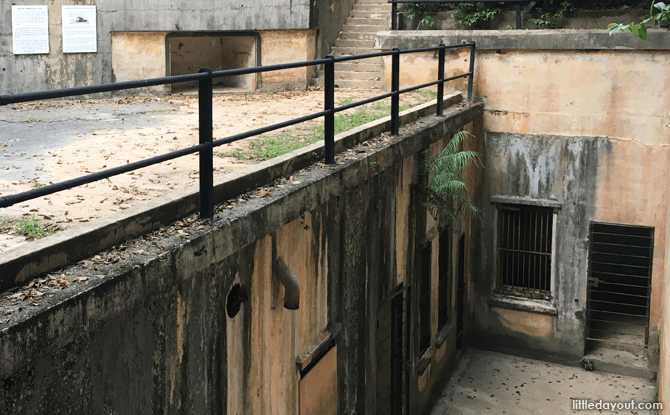 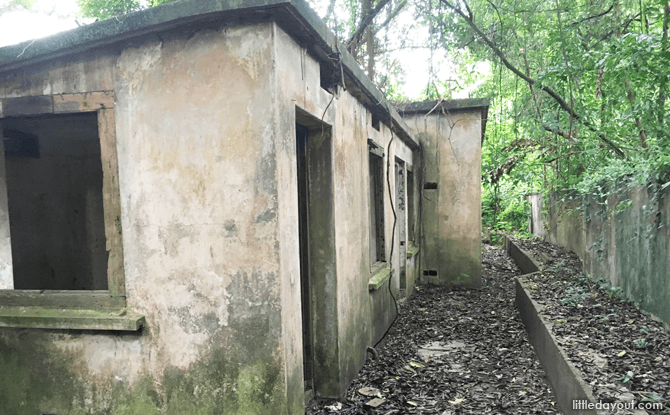 If you are feeling adventurous, there are old support buildings, remnants of the WW2-era battery, nearby.

In the Past: Supersized Wildlife (Models) In the past, there used to be supersized models of the wildlife that inhabit the secondary forest of Mount Imbiah. These models are now … errrm …. “extinct”. 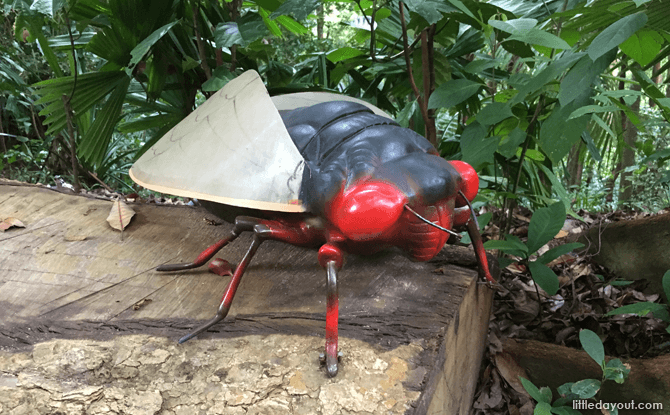 There ranged from adorable creatures such as the hornbill to creepy crawlies and insects. The models are a reminder of the real creatures are probably lurking around the scrubland of Mount Imbiah. The models are now gone. The only model that you may be able to spot at Mount Imbiah is that of a lion at the start of the Imbiah Trail.

Getting to the Imbiah Trail To get to the Mount Imbiah Trail from Imbiah Lookout, head along the 225-metre long Imbiah Bridge. This bridge has been specially converted from part of the old Sentosa monorail track.

READ: Head in Search of Totem Poles at the Sentosa Coastal Trail