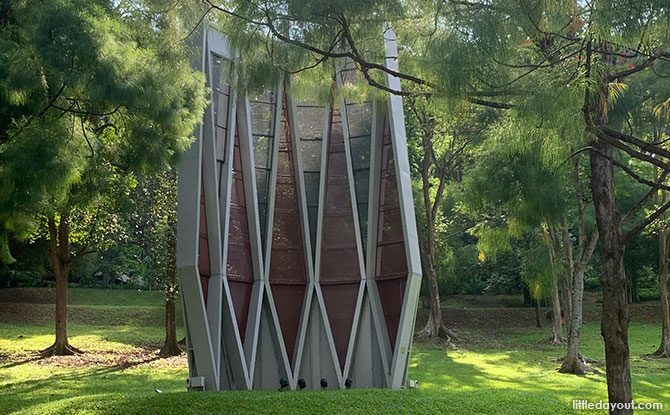 Before there was Esplanade – Theatres on the Bay, there was the National Theatre. Standing at the corner of Clemenceau Avenue and River Valley Road at what is now Jubilee Park, Fort Canning Park, the National Theatre was a well-known landmark. Unfortunately, it is no longer there, but a sculpture / marker stands in its place, an echo from the past.

The National Theatre, Singapore, opened its doors on 8 August 1963. It was an important venue for the staging of performances, convocations and National Day rallies in the past. Some of the acts which performed at the National Theatre include the Russian Bolshoi Ballet, the Louis Armstrong Jazz Band, the Duke Ellington Orchestra and The Shadows.

Located on what was known as King George V Jubilee Park, the predecessor of today’s Jubilee Park at Fort Canning, the National Theatre Singapore was designed by a local architect Alfred Wong. His firm, AWP Pte Ltd (now called AWP Architects), was chosen after a competition.

The National Theatre had 3,420 seats (for reference, the Esplanade Concert Hall has 1,827 seats) and featured a cantilevered steel roof.

Five Stars and a Crescent Moon

The roof and the façade of the theatre were designed to look like five stars. In front of the building was a water fountain which resembled a crescent. Together, the National Theatre symbolically captured the five stars and crescent moon of the Singapore flag.

Unfortunately, the National Theatre was deemed unsafe due to defects in its roof. The upcoming construction of the Central Expressway tunnel nearby sped up its demise.

The last performance held there was on 15 January 1984. 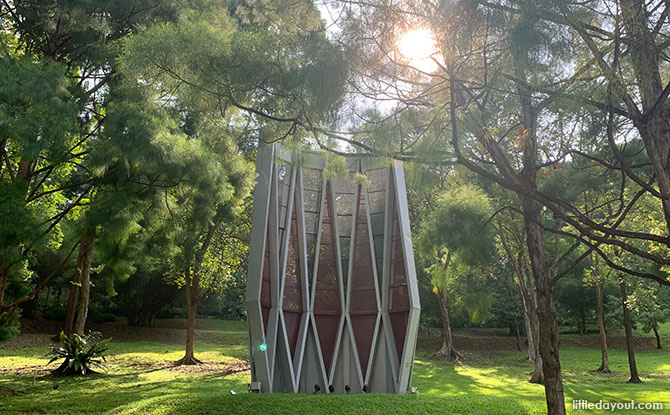 Today, if you visit Jubilee Park, you can view a structure which represents the façade of the National Theatre, close to the biophilic playground at Jubilee Park. It is a silent reminder of Singapore’s first arts venue and the significance of this historic site.