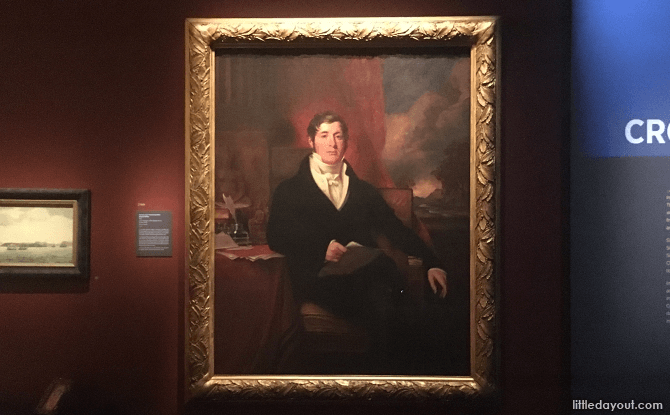 National Museum of Singapore provides a look into Singapore’s history spanning seven centuries from the 1300s to the 1980s. The museum’s exhibition galleries provide an interesting narrative of the Singapore story, told through historical artefacts and accounts.

National Museum of Singapore’s main exhibition gallery is known as the Singapore History Gallery. In addition to this gallery, the museum has several smaller thematic galleries and a couple of exhibition spaces that host revolving exhibitions and shows.

Start your visit to the National Museum of Singapore at the Singapore History Gallery.

Story of the Forest is a digital exhibition that immerses visitors into a digital forest. This digital work draws inspiration from a set of pictures of the region’s flora and fauna commissioned by William Farquhar, the first Resident of Singapore. It is a digital throwback to the natural environment that existed in the region.

Beyond Story of the Forest is the first section of the Singapore History Gallery.

Visitors are taken back to the 1300s when Singapore was known as Temasek.

Archaeological evidence from this period, in the form of Chinese coins, pottery and gold jewellery excavated from sites such as Fort Canning Hill, suggests that the island was a trading port.

However, Temasek eventually went into decline and stayed that way until the next epochal event took place, the arrival of Raffles in 1819. In search of a trading port, Raffles landed in Singapore and struck a bargain to establish a British settlement on the island. 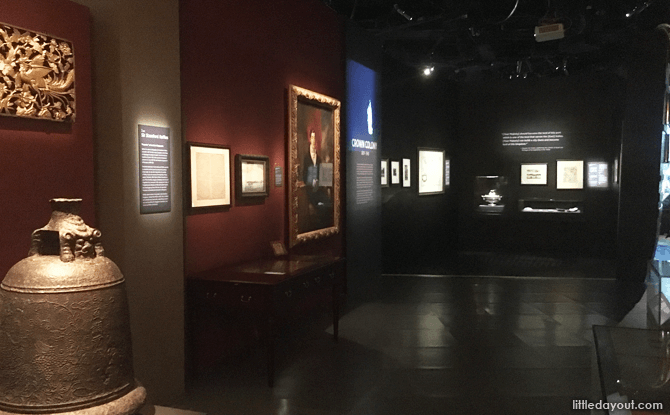 In the early days, Singapore thrived on trade and the original Malay village that first greeted Raffles was quickly transformed into a colonial town. This transformation is chronicled in the Emporium section of the Singapore History Gallery.

As the city grew, prominent community leaders rose up and so did vices such as opium dens and secret societies. This emerging society is captured within the Port Town section of National Museum of Singapore’s History Gallery.

By the 20th century, Singapore’s fortunes were on the rise. More migrants arrived in Singapore and by the 1930s, Singapore was popular enough of a destination for American Express and Thomas Cook to publish travel guides about it. 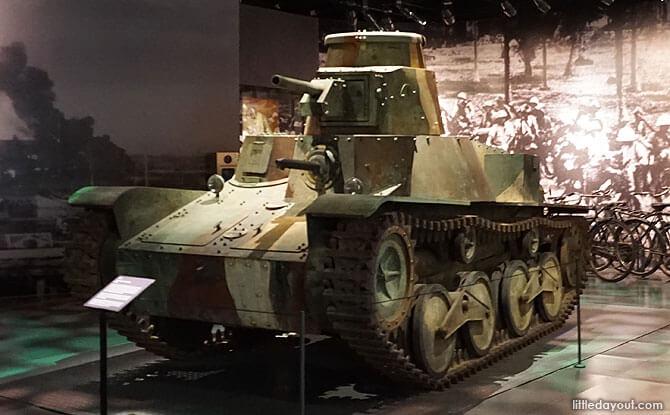 These fortunes changed dramatically with the arrival of World War Two. The first bombs fell on Singapore in December 1941 and the island-city eventually occupied by the Japanese from February 1942 to August 1945.

This period of Singapore’s history is known as the Japanese Occupation and is captured within the Singapore History Gallery. 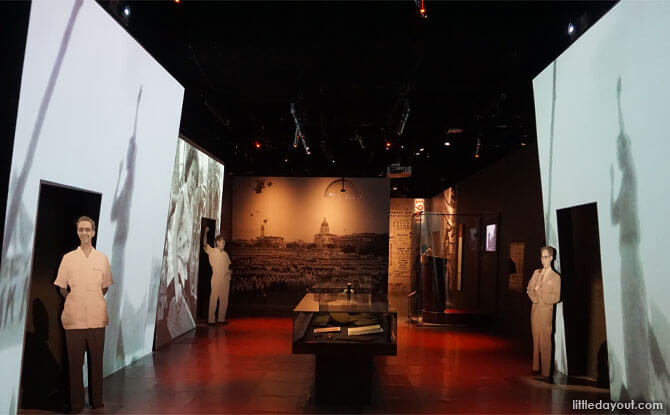 After World War Two, like many countries, Singapore proceeded down the road towards self-government. Political awakening resulted in multiple parties emerging and the struggle for independence.

1963 saw the merger with Malaysia. However, two years later, expulsion from Malaysia thrust Singapore into the realm of nationhood on 9 August 1965.

The last few sections of the Singapore History Gallery at National Museum of Singapore recounts how the newly minted Singapore dealt with issues such as security, employment and housing. 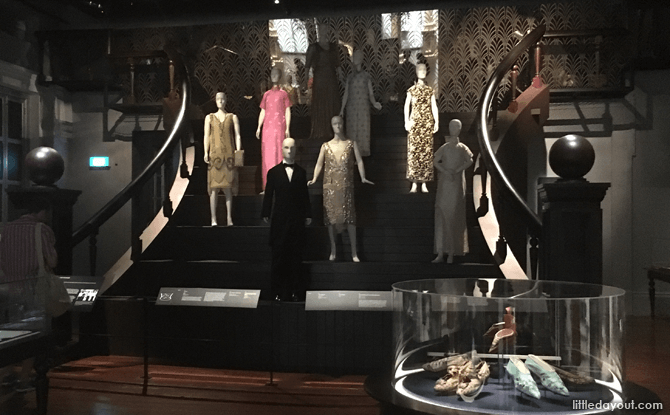 Modern Colony: 1925 – 1935 deals with Singapore at its colonial heyday. It provides a peek into high society, those who worked behind the scenes and the role of women. 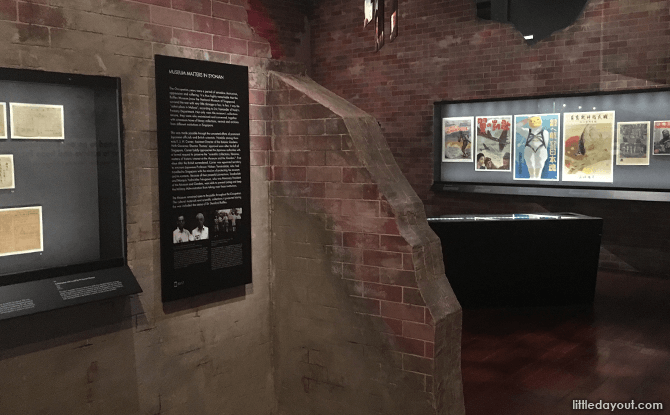 Surviving Syonan: 1942 – 1945 take a personal look at the war years, detailing life during the Occupation. 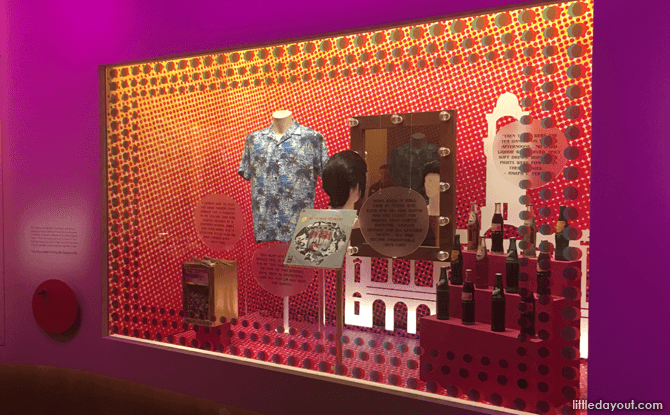 Growing Up: 1955 – 1965 delves into life in Singapore during the years leading up to independence. It provides a glimpse into kampong life and popular icons of the day. 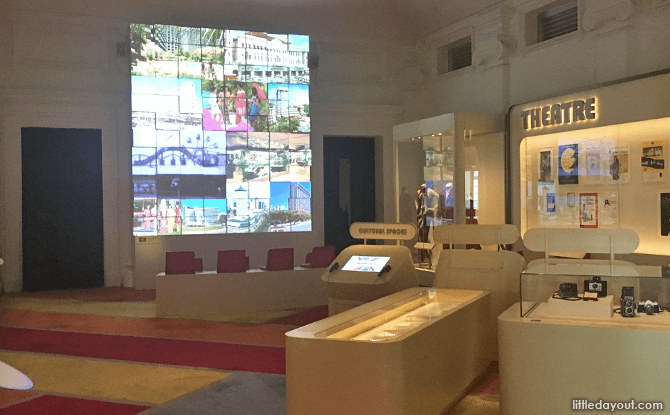 Voices of Singapore: 1975 – 1985 provides a look at relatively more recent times and includes a nostalgic film montage that of Singapore in the seventies and eighties. The last gallery on the second floor is the Goh Seng Choo Gallery. Inside is a small exhibition, Danger and Desire, based on the prized William Farquhar Collection of Natural History Drawings.

Visiting the Museum’s Exhibitions and Galleries

There is a lot to take in at National Museum of Singapore. Filled with countless artefacts, it provides a rich narrative of Singapore’s past and is most-definitely a must-visit museum in Singapore.

The National Museum of Singapore also often hosts other exhibitions and large-scale events such as Children’s Season and Singapore Night Festival. Keep a lookout for these different events which take place throughout the year.

Air Force Museum: A Vintage Flight to the Future