The Mega Playground at The Arena @ Keat Hong is quite literally taking play in the heartlands to new heights. There is not one, not two but three play areas for kids of different ages at this Choa Chu Kang playground and two are unlike others that we’ve seen in the neighbourhoods.

The Arena @ Keat Hong is a sports and fitness hub which is fitted out with all the facilities that you could want for an active lifestyle. The Arena’s playground is where kids can not only stay active but to be challenged as they conquer the play structures. 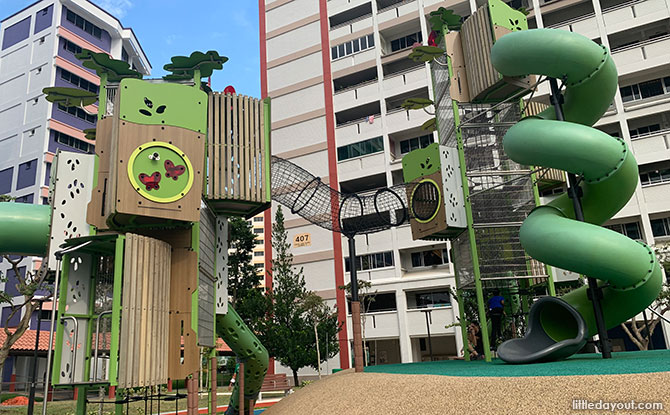 Located at the corner of The Arena, in front of Block 407 Choa Chu Kang Avenue 3, is a green and khaki “treehouse” playground. This is made up of two towers. The taller structure is raised up on a mound and kids can make use of rope inside to climb their way to the top. The tower is three storeys high. From the top, a green tube slide circles its way back down to the soft floor. An alternative to taking the slide is to cross over a netted bridge to reach the other tower. This tower has several platforms with wooden paneling and two options of slides to return back to the ground!

At most estates, the Treehouse Playground would be sufficient to elevate the level of play. However, this is the Mega Playground at The Arena @ Keat Hong and one is just not enough! The Choa Chu Kang playground has a second towering playground. At one end of the orange-and-brown playground is an unusual looking trio of egg-shaped pods. On closer inspection, you will notice that the orange pods have a brown cap like the cupule of an acorn.

Kids can climb their way up the stack of “acorns”. A slide leads down from the pod at the very top. There is an alternative path for those who wish to venture in a different direction. A netted bridge leads from a pod to a wooden hut platform on an adjacent pole, and onward still to a second hut on a pole. There is the option to ride a curvy tube slide down or to climb down the pole.

Both the Treehouse and Acorn Pod playgrounds are designed for 5 to 12 year olds.

Younger ones, 2 to 5 years old, are not forgotten either. There is a third Arena @ Keat Hong playground for younger kids. 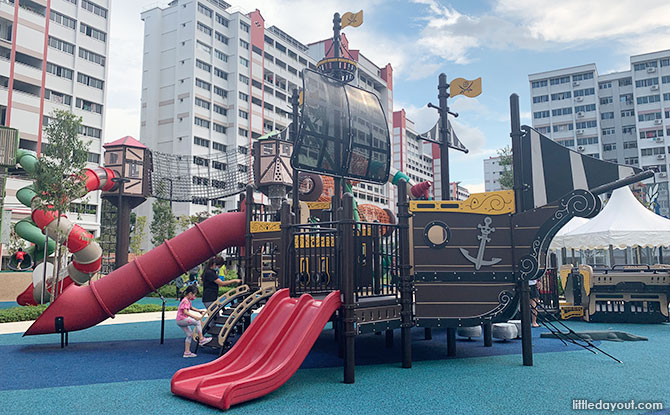 The centrepiece of the play area is a pirate ship. A rampway up to the playground makes it more accessible. There’s also a rocking carriage which is accessible via a ramp. Other play equipment suitable for younger children include a basket swing and merry-go-round. There’s also a parent-child swing and teeter-totter (first time we’ve seen the latter) for some face-to-face bonding time through play.

Getting to the Mega Playground at The Arena 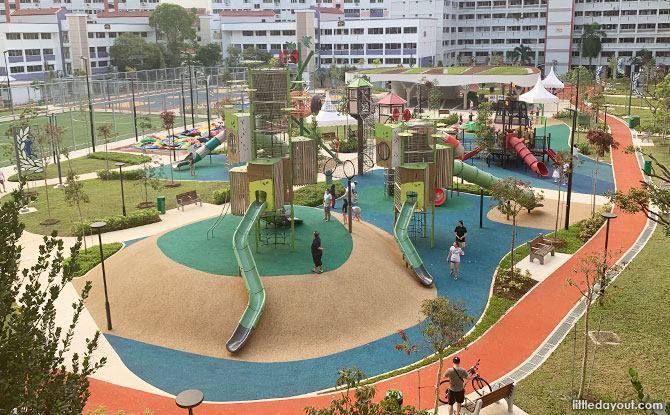 The Mega Playground at The Arena @ Keat Hong lives up to its name. It is a fun spot for families and kids to spend time together. Kids may also find it challenging and that can be a good thing too as they learn to step out of their comfort zone and reach for new heights.

The Mega Playground can be found in front of Blocks 411 and 407 Choa Chu Kang Avenue 3. It is the work of Semec Enterprise, the same folks behind Coastal Playgrove at East Coast Park.

While there, also be sure to check out the Memo interactive poles at the fitness area that parents and children can enjoy together. And the futsal court has a Yalp Sutu interactive wall too.