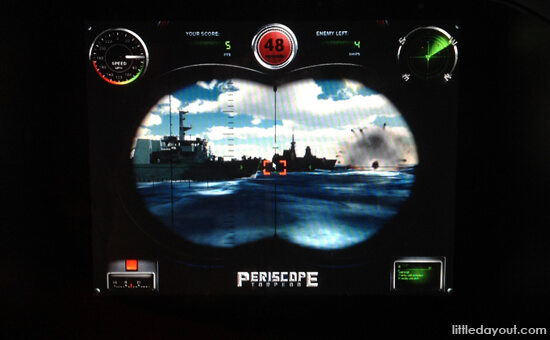 Just beside Changi Naval Base, three kilometres off Changi Coast Road (near the end of Tanah Merah Coast Road and just after SAF Yacht Club), is the Singapore Navy Museum. This three-storey museum showcases the history and traditions of the Republic of Singapore Navy, bringing its capabilities to life with interactive and engaging exhibits.

“Docking” at the Singapore Navy Museum

The Singapore Navy Museum is literally a little off the beaten track, beyond Tanah Merah Ferry Terminal and even the Newater plant.

However, if you are looking for something different to explore around Singapore, consider charting a course and setting sail to this Museum in a far-flung eastern corner of Singapore. Stepping inside, the Museum looks modern and pristine, just like well-pressed white naval uniforms. Display panels trace the development of the Navy from its roots in the Singapore Naval Volunteer Force to the fighting force it is today.

Historical artefacts from RSN Panglima, the Navy’s first ship, help make the past all the more tangible. Seafaring traditions are probably one of the strongest in the armed forces. Wandering the first floor, you get a taste of the basics such as the difference between a bend and a hitch, states of readiness on board a ship and the insignias of the Republic of Singapore Navy (RSN). Outdoors, the static display area provides a chance to get up-close to the big guns. A Bofors 57mm gun, long-range torpedo, assortment of anti-aircraft weapons and other armaments on display. Diving Deeper into the Singapore Navy

On the second floor, visitors get introduced to the vocations undertaken by the men and women of the Singapore Navy.

Jobs such as the naval diver, medical crews and weapons specialists are showcased.

One area of particular interest is the submarine section. After viewing a model of a submarine and watching a torpedo shoot across the floor, make sure you don’t miss the chance to go “inside” a submarine.

In the submarine’s “control room”, bathed in red-hued light, you can take over the controls of the submarine and manoeuvre it to safety, or even launch a torpedo attack on enemy ships through a periscope. Also found on the second floor are two other interactive simulation games.

In Naval Raider, players work as a team to man a ship’s fire control panel and destroy the enemy.

In Command At Sea, players assume control of a frigate and make decisions on how to hunt down the enemy. 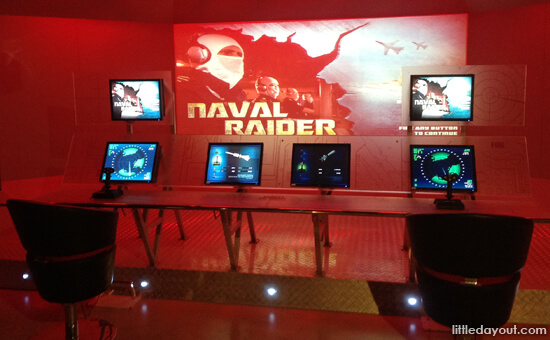 The third floor of the Singapore Navy Museum at Changi focuses on the RSN’s international role and the overseas operations it has engaged in over the years.

However, the big draw on this floor is the ship simulator. With three side-by-side LED screens provides an expansive vista of a simulated seascape while visitors can take over the helm of the ship and pilot it out to sea. Make sure you don’t run aground! Before leaving the Navy Museum, do take a moment to have a look at the displays located along the stairways on maritime traditions such as the Bosun Whistle. This high-pitched whistle is used to issue different commands onboard a ship. Little red press buttons let you listen to what each call sounds like. READ: Air Force Museum – A Vintage Flight to the Future