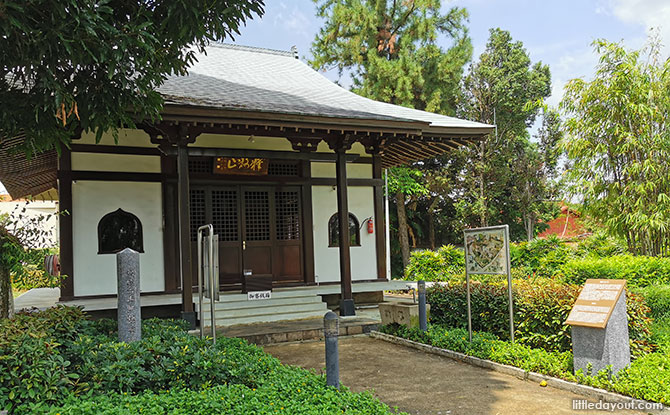 We have seen the pink blossoms in Singapore and plenty of posing with trumpet flowers. One place where they can be found when the beautiful trumpet flowers that are blooming is the Japanese Cemetery Park. However, this sanctuary of tranquillity has more to offer, including not just visitors or curious passers-by, but many birds and other creatures.

Japanese Cemetery Park is nestled at Chuan Hoe Ave, amidst a quiet landed housing estate. It was actually part of a rubber estate plantation and approved to be a Japanese cemetery in 1891. Japanese Association still manages it.

How did it become a Japanese cemetery? Find out more below. 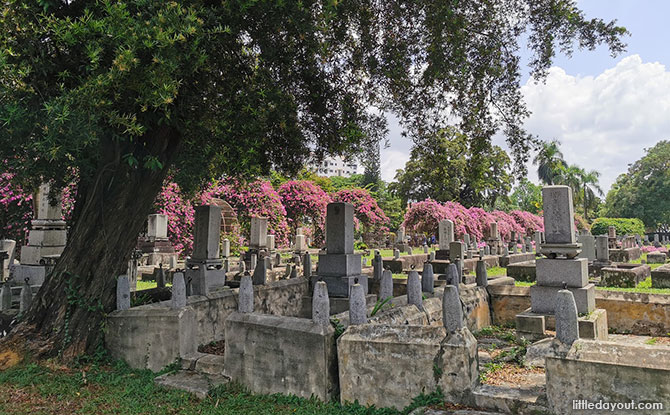 It was estimated that close to a thousand Japanese peasant girls, as young as 13, were sold into a life of prostitution also known as karayuki-san. They served immigrant labourers working in plantations and mines. Tagajiro was a brothel owner who decide to dedicate land to these girls, many who died in unfortunate and destitute circumstances.

You can see the nameless tombs, facing the same direction away from Japan, highlighting their extremely tough lives in a land far away.

I found it ironic that the brothel owner Tagajiro chose to continue his trade, considering the tragedies then. But this interesting bit of history also gave a resting place to many others.

Ever wondered who the first Japanese resident was? This fact was also uncovered in 2004 by an SLA officer. Otokichi, also known as John M Ottoson, was a sailor born in Mihama, Aichi prefecture. He survived a storm in 1832 and was washed shore on the West Coast of America after 1 year and 2 months. He was however rejected by Japan, but remained loyal to his country while becoming a successful trader. The sails of destiny brought him to Shanghai and then Singapore where he became the first Japanese resident.

His remains were moved from Choa Chu Kang cemetery to Japanese Park cemetery when Lee Foke Meng from SLA uncovered the facts. A delegation from Mihama even visited Singapore in 2005 to bring back some of his ashes to Japan. 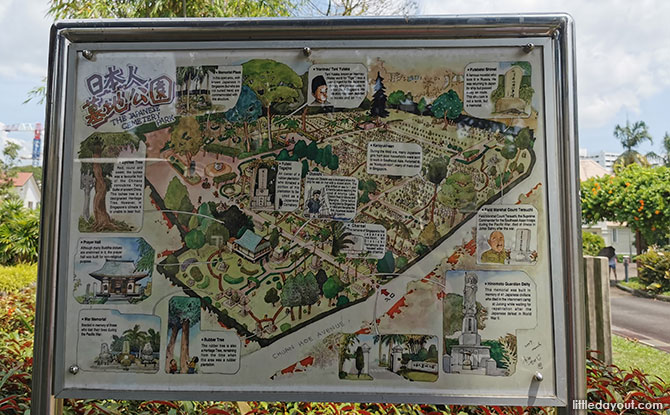 Spy with your little eye – there is a spy buried at Japanese Park Cemetery! Unlike James Bond, this true story was about Tani Yukata, a secret agent for the Japanese military who passed away in Singapore. He was born in Fukuoka and then moved to Malaya, converted to Islam, had a Malay wife and even served in the Japanese military before returning to Kuala Terengganu.

Before World War 2, he became a secret agent for the Japanese and died from either battle wounds or malaria. His story has been depicted in novels and films like “Harimau”.

Some Japanese who fought in the war are also buried in the cemetery including the Supreme Commander in charge of Japanese troops in Southeast Asia – Field Marshal Count Terauchi. After the formal surrender, Terauchi presented his samurai swords to Lord Mountbatten upon learning that Lord Mounbatten wished to have the swords. Terauchi was tried for war crimes, imprisoned in Johor till his death in 1945.

There are also over 200 war criminals buried in the cemetery. 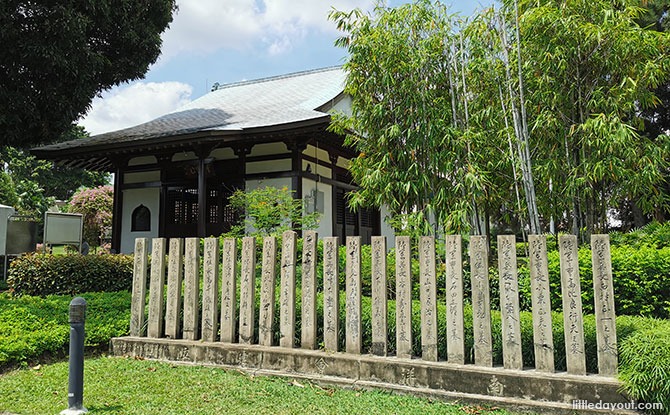 You can see that the cemetery has marks of a Japanese garden. Apart from the Mido prayer hall built in typical Japanese architecture, the gardens are nearly pruned with hedges and flora all around. 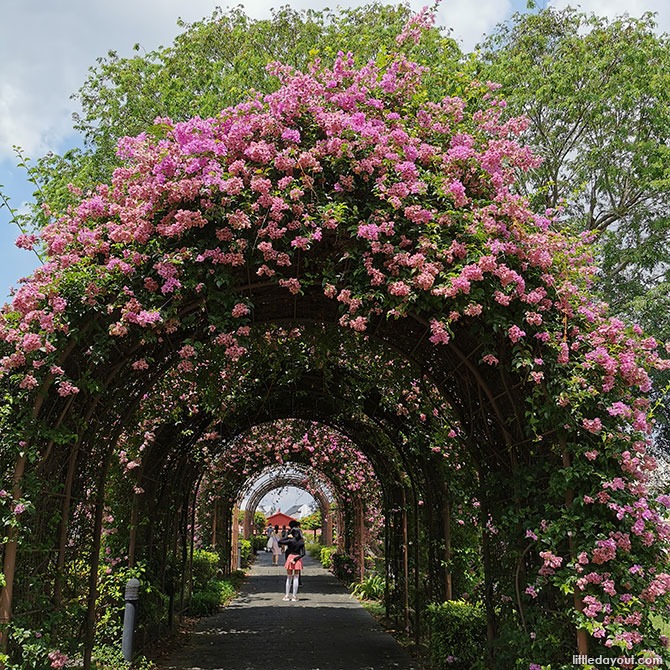 Trumpet flowers are grown on the arches on both sides of the cemetery. The beautiful walkways also have cosy nooks with flora forming natural shade over the pavilions and benches. 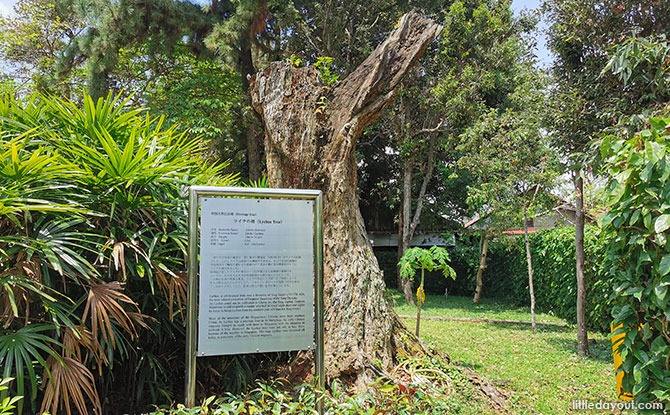 Try to look for the fruitless lychee tree which is a designated heritage tree. The seeds were brought here by early Chinese migrants, but the tree remained fruitless due to the climate. Today it has been cut down perhaps due to its age. 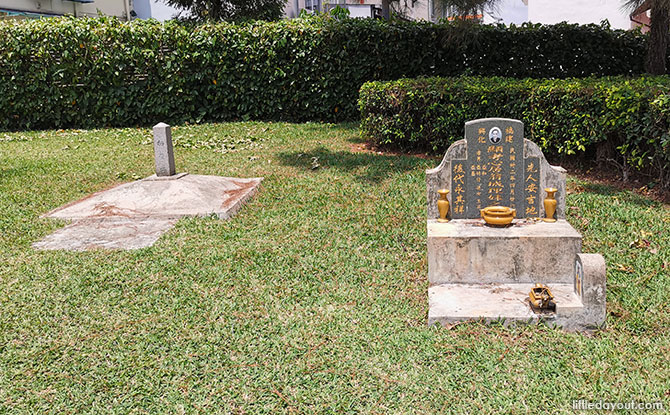 It might not be so quiet these days or off the beaten track but the Japanese Cemetery Park still has its charm. Do be respectful when you visit the park as these is after all a resting place. Like Bukit Brown Cemetery, this park has its stories to tell – if you stop, observe and read the signs of the departed.