Home Learn History A Walk At Bukit Brown: Fascinating Insight Into History And Heritage Through... 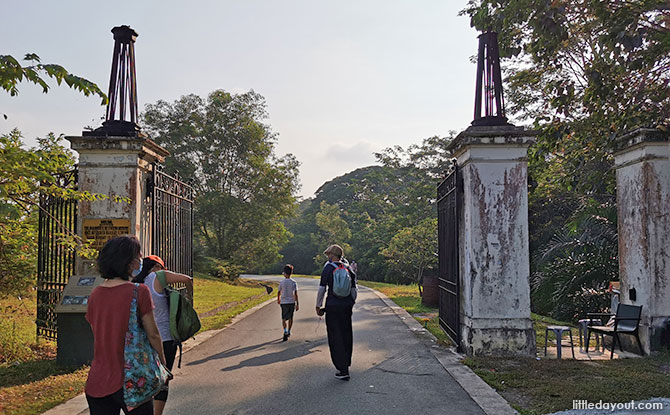 The first thought of entering a cemetery for most might be – spirits and spookiness. Bringing kids along on a cemetery walk might be taboo. On the contrary, it is better to see death as a reality and natural occurrence rather than shun it altogether. We seized the opportunity to join in National Heritage Board’s Bukit Brown World War II tour and were fascinated by how much gravestones can teach and impart.

The Significance of Bukit Brown during World War II 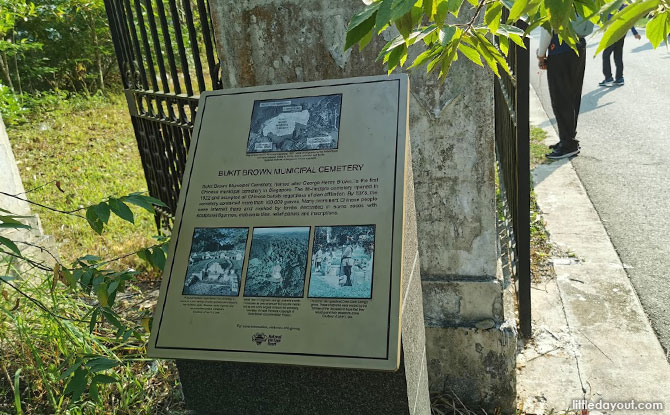 Bukit Brown is a large piece of land which belonged to George Henry Brown who used it for planting of crops like nutmeg and coffee. After his passing, the land transferred hands and eventually was bought by the Ong clan and the British government as burial grounds. It is now a closed cemetery with no burials since 1973.

What has Bukit Brown got to do with World War II? Plenty. It was the last battleground before the fall of Singapore as MacRitchie Reservoir, Singapore’s water source, and Command House were nearby. This resulted in many soldiers dying at Bukit Brown defending Singapore.

There are also graves of war heros, heroines, collaborators, civilians buried at Bukit Brown during and after the war. Often, their graves tell of stories that the textbooks don’t. We were honoured to have Fabian Tee, a volunteer “Brownie” regale us with tales of Bukit Brown.

Our Pioneers at Bukit Brown Cemetery 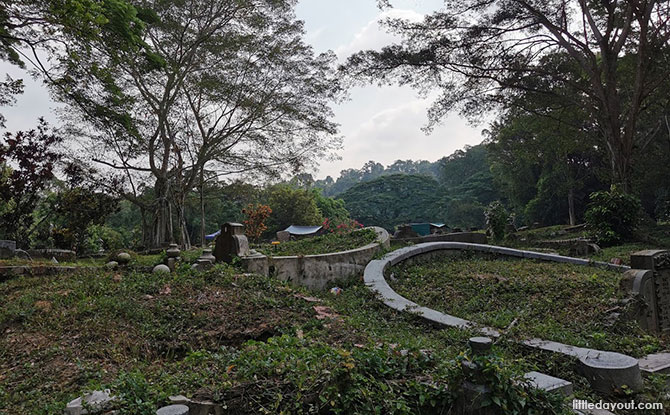 Truth be told, most of us would likely know someone who is related to those buried at Bukit Brown Cemetery. Significant figures include the grandparents of our present and former leaders like Tony Tan, Lee Kuan Yew and even Crazy Rich Asian Kevin Kwan.

Some of us may even have relatives laid to rest in those same grounds. These connects us to the past as the graves have stories untold, which are precious not just to memorialise important figures but to learn more about our own history.

We were glad that Fabian from All Things Bukit Brown could share some of these with us on the three-hour tour.

There are close to 100,000 graves at Bukit Brown and it is believed to be one of the largest Chinese graveyards outside China. We visited some of the graves on Hills 1, 2 and 3 belonging to people who had varied roles in WWII or perished during the war.

Fabian patiently walked us through the wordings on the gravestones, interpreting information such as date of passing according to various calendars, symbols, carvings, tiles and the number of wives.

Most Straits-born Chinese, with Peranakan heritage, usually had bilingual graves in English and Mandarin. This reflected their roles in the colonial era, often working and socialising with the British. Some of these graves have beautiful Peranakan tiles decorating them. 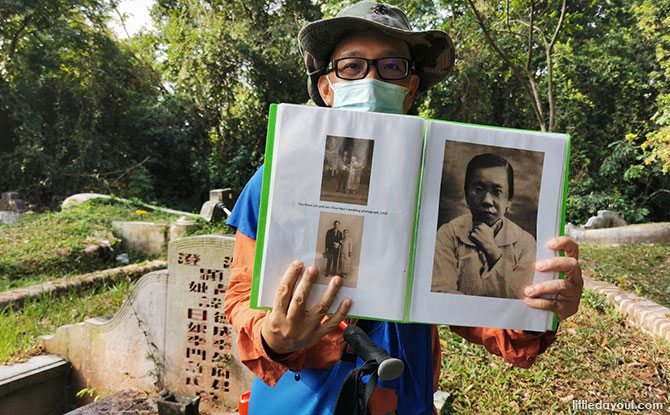 We heard the story of Singapore’s first lady doctor, Dr Lee Choo Neo, a lesser known relation of PM Lee Hsien Loong. Clearly a trailblazer, instead of staying home and cooking like many Peranakan ladies were expected, she went to schools which are also known as prominent girls’ schools today.

Dr Lee, like many of the Chinese in Singapore, felt compelled to support China’s war against Japan. She even contributed two war planes to the British war efforts.

Such fundraising efforts by the Chinese in Malaya fuelled the fierce resistance of the Chinese against the Japanese in China. When the Japanese conquered Singapore, they were bent on punishing those who had supported China’s war efforts. In the ensuing Sook Ching operation, it is estimated that close to 70,000 Malayan Chinese lost their lives.

Dr Lee, unlike other Chinese who were killed during the war for their anti-Japanese stance, was spared. Before the war, she had a close Japanese neighbour and her family took good care of his young son. In a twist of fate, during the war, her Japanese neighbour’s son, now older, was a soldier in the army. However, he protected her throughout the Japanese Occupation and Dr Lee was even able to continue her medical practice.

She certainly should be better known today as a role model who made great contributions to society. 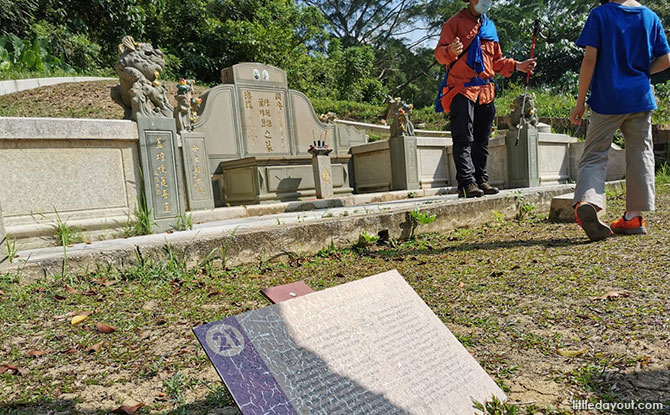 As an operational cemetery during the war, Bukit Brown saw the burials of those who died during the war and suspected mass graves of soldiers who were hastily buried.

Among the graves we saw were that of patriots like Tan Ean Kiam, Tan Ean Teck as well as Tay Koh Yat. The three Tan brothers are the ancestors of renowned author of Crazy Rich Asians – Kevin Kwan. Their prominence in the plantation, real estate and banking sector also meant big efforts in rallying support as Overseas Chinese.

During the war, they were coerced to be collaborators with the Japanese. Trapped between a rock and a hard place, they had to help the Japanese financially. The patriots died a year apart during the war – one probably due to the guilt from working with the Japanese, while the other was killed by the pro-Communists in Johor while he was surveying land in Johor for plantation use. 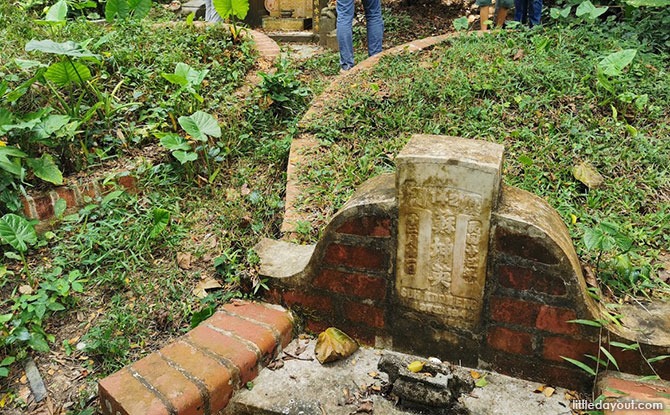 Aside from heroes, we also saw graves of the man in the street. One was a 19-year-old Soh Koon Eng who died from a bombing raid. Her niece had shared how she had cried out in pain before dying, as she was hit by splinters from the ancestral altar table.

Such precious memories can only be captured through retelling of stories and wartime stories are especially poignant because of the pain and suffering experienced.

Fabian shared that there were many other stories he could tell. However, because of time constraints, he merely skimmed the surface. That made us want to be back for more! Our tour ended after three hours which actually felt like time just whizzed by as we traversed the area.

Our Thoughts from the Walk at Bukit Brown Cemetery 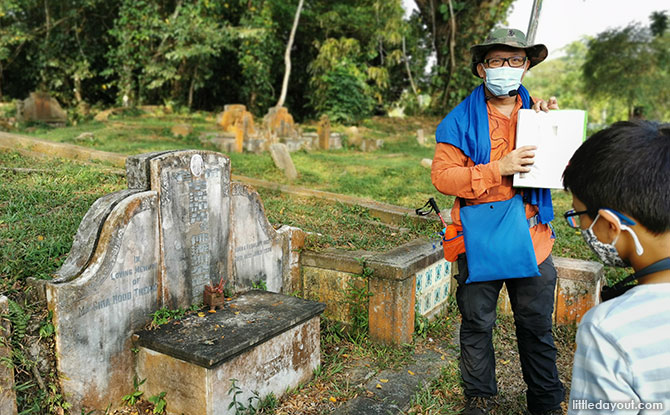 Graves, as silent as they be, speak volumes about history and heritage. The insights gleaned from the graves about the war showed how unbearable it could have been. Many had the same tragic end, while others endured shame, guilt and trauma for surviving it. There are no winners in war.

While we did not encounter any spirits, we definitely felt the passion and enthusiasm of our volunteer guide whose group “All Things Bukit Brown” conducts walks almost every weekend.

The keen sense to preserve this prime area through educating others about the rich history of the silent folks at rest is evident and compelled us to want to do the same. We loved the peace and tranquility of Bukit Brown. The area was not just rich in heritage but biodiversity. We hope it remains as it is for a long time, especially for future generations to visit.

There are various themed walks by the “Brownies” from All Things Bukit Brown, not just war related but walks about Gangsters as well as Crazy Rich Asians. Get notified here if you would like to join in a walk.