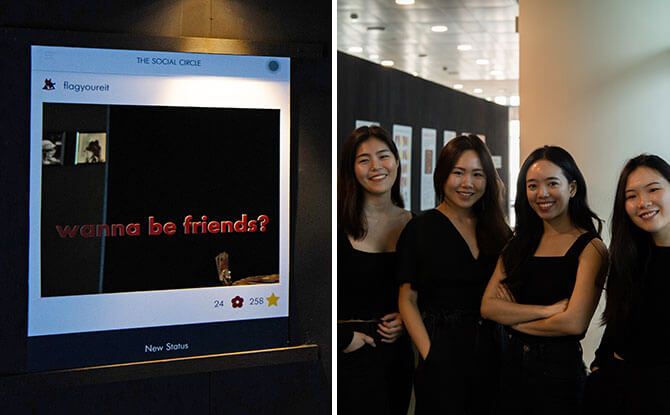 Comments such as “You look cute” or “Wanna be friends” may seem innocent enough, but these can be a prelude to more sinister advances by online child groomers. To highlight such tactics and the issue of online child grooming, four undergraduates from Nanyang Technological University have launched a three-month campaign Flag, You’re It.

The team of students from Wee Kim Wee School of Communication and Information is made up of Stephanie Wong, Vanessa Tan, Esther Soh and Vinice Yeo. As part of the campaign, they are currently running a free public exhibition, 45 minutes in The PreyGround, at the National Library Building.

When asked why they chose to tackle the issue of online child grooming, Vinice shared, “Some of our team members have personally experienced this before, and we also know of friends who have been victims of grooming. Hence, we decided that there is an urgent need to tackle this issue – especially with the rising number of cases happening daily.”

According to the Microsoft Digital Civility Study conducted in 2019, two in three Singapore youths between the ages of 13 to 17 have received unwanted sexual content online while one out of two have encountered unwanted contact from an online stranger.

In 2015, Touch Cyber Wellness conducted a poll of 2,500 upper primary school and secondary school student and found that one-third of older students and one-tenth of the younger student have met up with someone they first met online in the past year.

In the Flag, You’re It team’s own interviews with students between the ages of 13 and 17, half of the interviewees shared that they have either experienced or know of friends who had been or came close to being sexually groomed by an older “online friend”.

With the prevalence of social media today, this is not an issue that only affects teens. Vanessa said, “Since our digital launch of @flagyoureit, we’ve had many people approach us via Instagram DM to share their grooming story. Out of all the conversations we received, the youngest target was only 11 years old.” 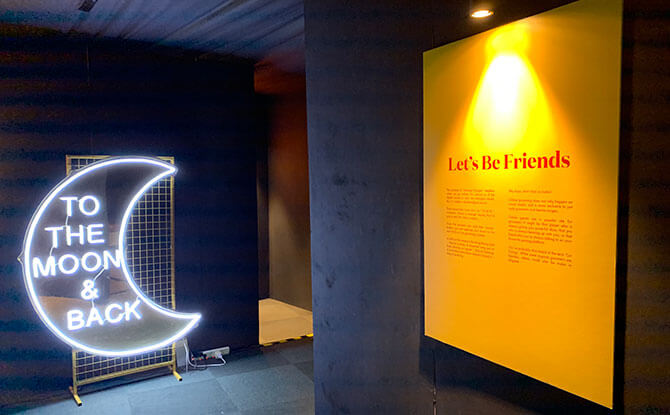 The 45 minutes in The PreyGround exhibition lifts the veil on some of the deceptive tactics used by groomers to make contact and establish emotional trust with their targets. It also debunks myths about age and gender stereotypes.

Visitors will step into the shoes of a “target” and experience the three stages of online child grooming at the interactive exhibition. 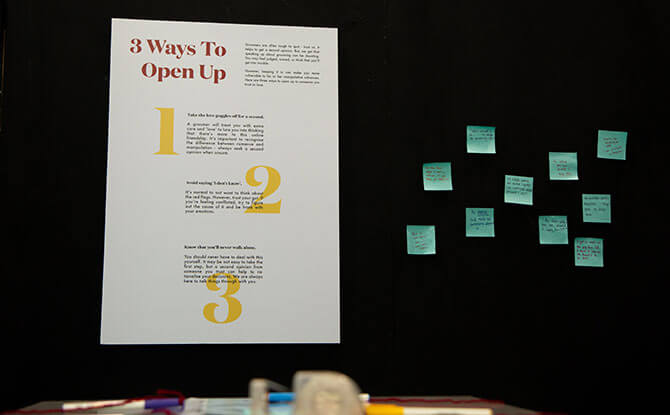 Beyond the exhibition, the team plans to package the research and content into a digital toolkit to be shared with secondary schools in Singapore.

“We hope that topic of online child grooming will be included in the Cyber Wellness curriculum for upper primary and secondary students,” said Stephanie.

“As anyone can be a target of online child grooming, we believe that there is a pressing need for parents to teach their children on critical thinking and being vigilant online. Online child grooming isn’t an easy topic to talk about, but parents can start conversations with similar articles or through our digital content on FB and IG,” said Esther.

Commenting on the Flag, You’re It campaign, Ms Koh Li-Na, Assistant Chief Executive for Digital Readiness Cluster, Info-communications Media Development Authority (IMDA), said, “A digital society is one where people not only have access to technology, but are also able to use technology safely and confidently. This youth-led project, supported by the Our Singapore Fund for Digital Readiness, demonstrates how we can come together to strengthen our digital society. We hope that more will be inspired to initiate such ground-up projects on digital readiness, for the broader community.”

The 45 Minutes in The PreyGround exhibition is now on till 29 February 2020, 10 am to 9 pm, at Level 8, National Library Building at Victoria Street.