Home Play Westgate Is Throwing A Party In The Playground – Westgate Wonderland Halloween... 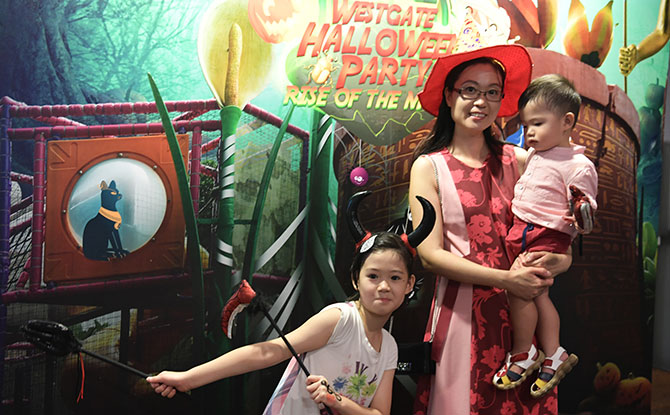 Every weekend this October, Westgate is throwing a party in its playground and it’s all treats – no tricks!

Till 28 October 2018, the Westgate Wonderland Halloween Party takes place Friday to Sunday, 6 pm to 9.30 pm at Singapore’s largest rooftop mall playground. Kids will get to navigate a maze, stop a stampede of mummies and take part in other fun activities at this exciting event. 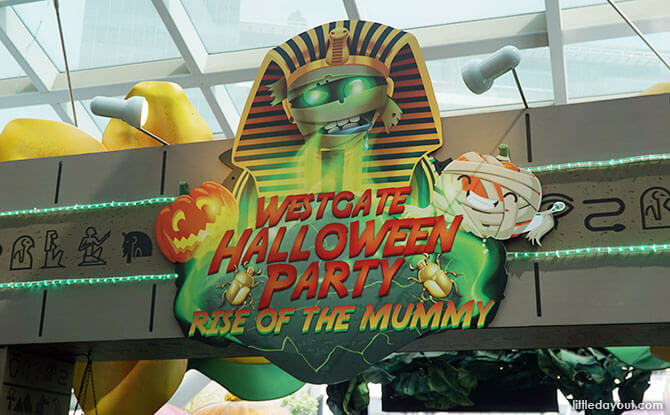 An Egyptian arch marks the entrance to Westgate Wonderland Halloween Party, echoing the theme of this year’s event – “Rise of the Mummy”. Pluck up the spirit of adventure and venture onwards to fun and games. 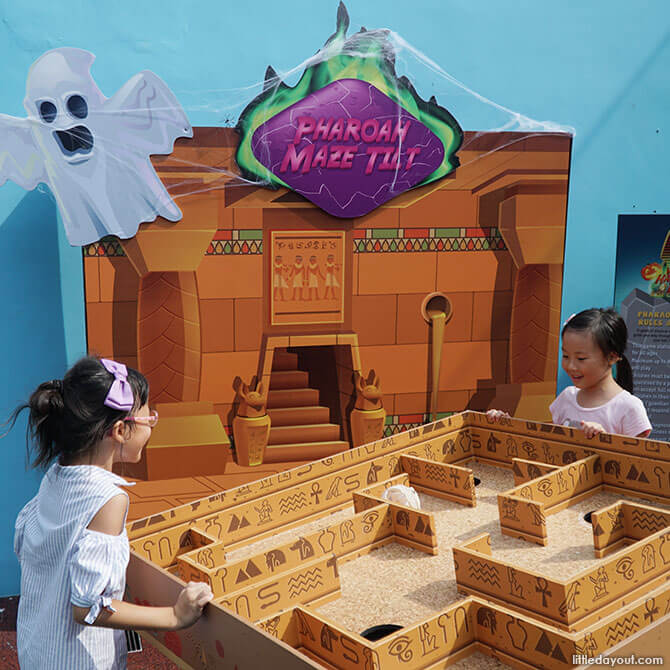 At the Pharaoh’s Maze Tilt, kids will need to work as a team to conquer this “ancient” puzzle.

It is a moveable maze which kids will need to tilt about to steer the ball to its objective. Each child takes a corner and together they can use the ball to conquer the maze. 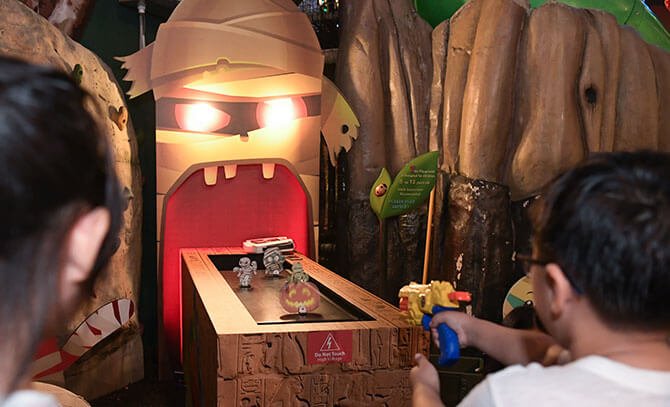 After solving the Pharaoh’s Maze, head over to Mummy Stampede.

What would you do if faced with an onslaught of mummies and other assorted monsters? At the Mummy Stampede, little adventurers can whip out their trusty pistol and tackle the stream of mythical monsters.

Take aim and fire! This game is a sure-hit! Kids get to show off their dexterity by tossing a ring to ensnare a mummy at the Undead Loopie Loop. Get your skills ready to catch a bobbing mummy arm. 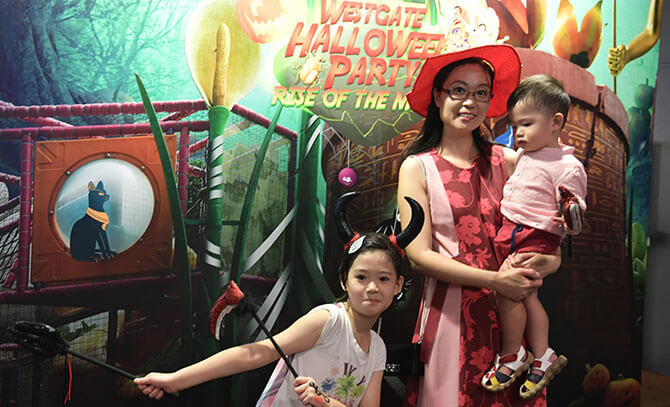 Brave explorers can strike a pose and get a memento of their adventure to bring home at the Rise of the Mummy photo booth. 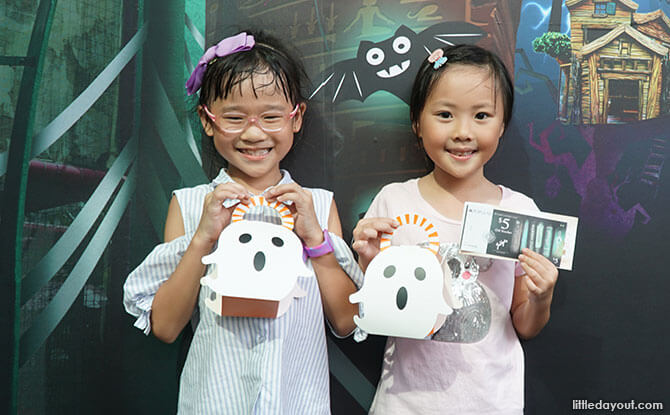 And that’s not all.

Kids will also receive a cute Halloween-themed goodie bag filled with treats at the Westgate Wonderland Halloween Party. Parents are not forgotten either – there are selected tenant vouchers in the goodie bag too! And part of the fun of Halloween is the chance to turn into a princess, a superhero or whatever else you can imagine.

Kids, come dressed up for the party in your best Halloween outfit and stand to win fabulous prizes in the daily Best Dressed contest!

Go Trick-or-Treating Around the Mall

The party extends beyond the Westgate Wonderland playground too. 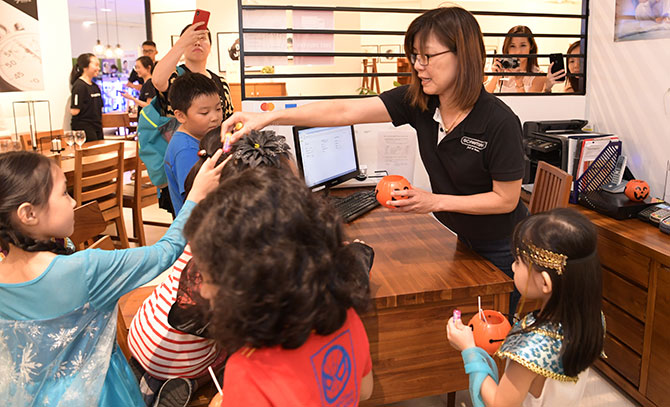 Halloween Party participants can take part in a special trick-or-treat session at 7 pm and 8 pm on event days. Go around to participating stores and fill up the goodie bag with even more sweets! 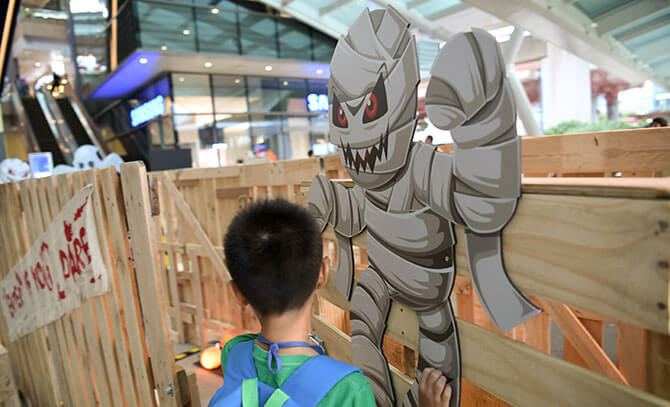 As a bonus activity, there is a Mummy Maze on the ground floor. This wooden maze is open for all to explore and is a great place for a game of hide-and-seek.

How to Be Part of Westgate Wonderland Halloween Party

To redeem a ticket to Westgate Wonderland Halloween Party – Rise of the Mummy, simply spend $120 within the mall (max 3 combined same day receipts). Each ticket allows for entry of two persons in the combination of either one child and one adult or two adults (13 years old and above).

Tickets can be redeemed at the Concierge on the third floor. With so much going on this October, be sure to head down to Westgate to get wrapped up in a good time at the Westgate Wonderland Halloween Party – Rise of the Mummy!