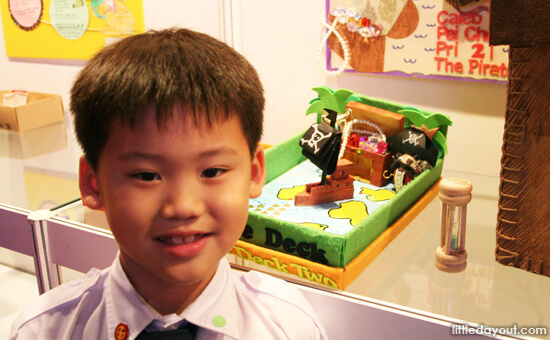 “Let me try, let me try”, was the phrase heard around Science Centre Singapore’s Hall A on 24 July 2013 as primary school children raced around having a go at the winning toys of the Sony Creative Science Award.

Creativity, imagination and invention took centre stage as the children showed off their toy creations while proud parents and teachers stood nearby.

Earlier that morning, the Sony Creative Science Award ceremony saw prizes being handed out to these young talents from primary schools around Singapore who had put scientific principles into action to create their own fun toys.

Now into its 16th year, this year’s competition attracted more than 4,200 entries from 96 schools in two categories, the Whizkid Award and the Scizkid Award.

The theme for the Whizkid Award this year was “Rock-Roll-Wobble!” with participants having to use their imagination to invent a toy that rocks, rolls or wobbles.

Top honours in the category went to Ashutosh Menon Rajeev from Global Indian International School (Queenstown) for his Oscillating Rolling Ben toy that uses a swinging weight to drive a car forward. Second and third prizes went to Chai Gien Lyn from Canossa Convent Primary School and Chua Yi Dao from Cedar Primary School respectively for their toy creations that applied the scientific principles of centre-of-gravity and magnetic forces.

In the Scizkid Award, participants were free to create toys based on at least one scientific principle. Top spot in the Primary 3 to 6 age group went to Jacob Tseng Wei Jie from St. Hilda’s Primary School for his creation, Ball and Roll, which used a magnetic lift to send a steel ball whizzing down a roller coaster track made from bicycle spokes and tubing. Second place was awarded to Justin Yew from Anchor Green Primary School for Sumo and third prize to Xia Yanhao from Huamin Primary for Sky Twins (Acter and Reverser).

14 Scizkid Merit Prizes were also handed out to participants in the Primary 1 and 2 age group.

1st , 2nd and 3rd prize winners each received Sony product vouchers worth $1,000, $600 and $300 respectively. Prizes where handed out by the Guest-of-Honour, Madam Halimah Yacob, Speaker of Parliament.

Recognising the important role played by teachers, 16 Blue Ribbons and seven Diamond Awards were handed out to teachers who have been actively involved in organising the Sony Creative Science Award within their schools.

The winning toys are on display at Hall A of the Science Centre Singapore for two days on 24 and 25 July 2013.