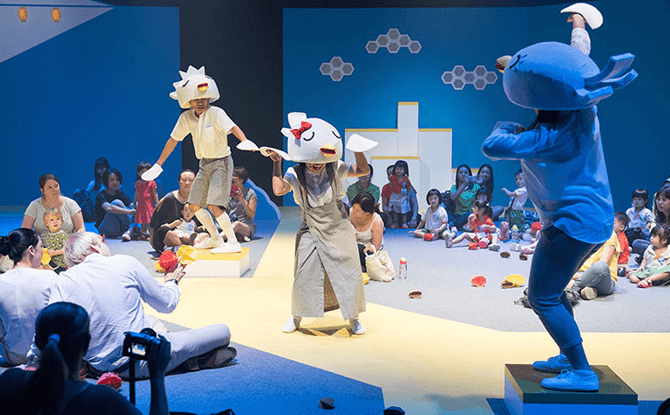 Kids and animals are like macaroni and cheese – they go perfectly together! So when we saw the shows coming up for Esplanade – Theatres on the Bay’s PLAYtime! 2018, we were excited for the kids, and happy for parents.

‘The Dog Who Goes Woof Woof’ is a heartwarming tale of finding friendship – with the help of a little dog, while ‘Bunny Finds The Right Stuff’ takes the audience through the titular character’s journey of self-discovery together with her friends.

In ‘The Bird Who Was Afraid Of Heights’, Eddie the Mynah has to overcome his fear to save his only friend, Matt the Rat.

Three shows featuring animals! What a treat for the little ones!

Apart from the likeable animal characters, children and their accompanying adults will also appreciate the informal, interactive format of the PLAYtime! 2018 shows.

There is no fixed seating. Instead, the audience sit on the floor, up close to the drama unfolding right in front of them. This allows two- to six-year-olds, for whom the PLAYtime! theatre series is created, to be totally immersed and drawn into the story.

Since 2016, PLAYtime! has also started staging sensory-friendly versions of its shows. These performances provide a welcoming and relaxed environment suited for children on the autism spectrum or with sensory sensitivities.

Calming spaces are set up inside and outside the theatre so children who feel uncomfortable at any point can freely exit and calm down, before returning to the show when they are ready.

A pre-visit guide – detailing the plot, characters, props used, and interactive points to look out for – enables parents to prepare their children with sensory sensitivities for the performance.

For all the thought and effort to make theatre accessible to young children, the PLAYtime! 2018 series of shows are not expensive at all! At just $20 ($18 for PIP’s Club members when you purchase at least two tickets) for a ticket, the shows are wonderful experiential opportunities, sparking children’s creativity and helping them learn through the performing arts.

‘The Dog Who Goes Woof Woof’ is written and directed by Tan Beng Tian, a recipient of the JCCI Singapore Foundation Culture Award in 2005 and co-founder of The Finger Players. The other two shows – ‘Bunny Finds The Right Stuff’ and ‘The Bird Who Was Afraid Of Heights’ – are page-to-stage productions based on books of the same titles written by Singaporean writers Emily Lim and Farah Bagharib-Kaltz respectively.

In fact, PLAYtime! has sought to present local content since its inception, a laudable effort to introduce young children to Singapore’s creative gems.

The Dog Who Goes Woof Woof

The first show in the PLAYtime! 2018 theatre series, ‘The Dog Who Goes Woof Woof’, is set in a playground where a little girl’s fun and peace are disturbed by the appearance of two adults whom she does not know.

Thanks to Woof Woof the little dog and an incident at the playground, she overcomes her fear and finds new friendships.

Featuring live music and minimal dialogue, this show brings together a human actor with puppets made of colourful batik, to realise an artistic vision inspired by Andrea Hensgen’s ‘De große Hund’ and Quek Hong Shin’s ‘The Amazing Sarong’.

‘The Dog Who Goes Woof Woof’ brings children back to the days of no digital distractions, where kids spent time exploring the neighbourhood, discovering new things, and meeting people.

“This is a story about discovering friendship in all forms, and teaching children not to judge a book by its cover,” said Tan Beng Tian, Director of PLAYtime! The Dog Who Goes Woof Woof.

A message that is perfect for the young children of today.

Get more information about The Dog Who Goes Woof Woof and the other shows lined up for Esplanade – Theatres on the Bay’s PLAYtime! 2018 here.

Little Day Out is giving away a pair of tickets to PLAYtime! The Dog Who Goes Woof Woof.

Simply answer a question about The Dog Who Goes Woof Woof and stand a chance to win:

Submit your answer by Monday, 19 February 2018 to participate in this giveaway.

The winner of this contest is Bernadette Teo.
Congratulations and enjoy your outing to the theatre!