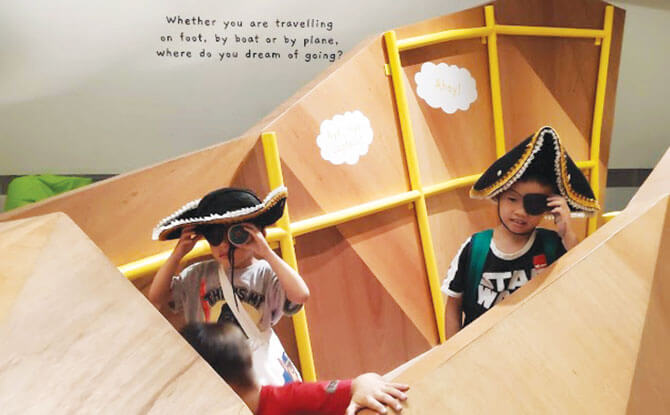 Gallery Children’s Biennale at National Gallery Singapore is one exhibition that’s best experienced over multiple visits. With so many interactive art installations, it is easy to lose track of time while having fun and exploring the exhibition.

That’s why, we are glad that Gallery Children’s Biennale has been ongoing for some time. We recently paid the exhibition a second visit and still didn’t have time to visit all the exhibits. Looks like another visit is due before it closes on 29 December 2019!

The Oort Cloud and the Blue Mountain – Empowering Curiosity

One of the exhibits which children of all ages seemed drawn to was The Oort Cloud and the Blue Mountain. Maybe it was the way the textures of the installation or its “cosmic” sounds and lights. Older children, including mine, took it one step further, drumming on the different buttons and modules, making music and rhythms.

I think most adults would admit that they ended up pressing the buttons and sensors too – trying to figure out what each one does!

Hazel Lim-Schlegel, the artist behind the work, shared that this was the outcome that she and fellow artist Andreas Schlegel, had hoped for – that The Oort Cloud and the Blue Mountain would “stimulate curiosity and expand the horizons of our imaginations”, regardless of age.

The Other Wall – The Wonder of Another Time and Place

At The Other Wall, we were greeted by a Burmese house surrounded by greenery. It was as if we had been transported to the countryside of Myanmar, known as the Shwe (golden) land. The kids were thrilled to sit on the golden lion’s back while others settled down to print Burmese alphabets.

Created by Aung Ko and Nge Lay, theinstallation is a throwback to life in 1970s Myanmar. The rocking animals were built using traditional Burmese techniques, a fast disappearing art form. The large cushions inside the house are fashioned after Burmese alphabets, introducing the kids to the language in a simple – and comfortable – way!

First, we thought we saw a gigantic foot. But after looking a bit harder, we discovered that it could also be interpreted as a huge wooden Sampan. And, because the kids love any opportunity for play-pretend, that was all they needed to turn into pirates prowling the high seas.

It should not come as a surprise that Dayung Sampan’s artist Zainudin Samsuri has an affinity for the sea. What may be less obvious is that the installation is a metaphor of his life-long journey of growth, respectfully learning from others and a reminder of the need to remain humble – valuable lessons for everyone.

It astounds me how Gallery Children’s Biennale opens up so many different worlds – real and imaginary – to kids. Its interactive installations truly provide a way for kids to embrace wonder through art.