Home Play Be a Changi Millionaire: Shop at the Airport for Chance to Win... 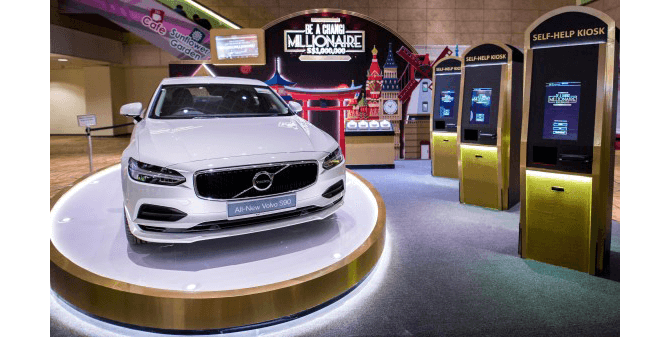 Shopping at Changi Airport just got amped up with an extra boost to the popular “Be a Changi Millionaire” retail promotion. In addition to the S$1 million cash prize up for grabs, a new “big ticket” prize has now been added this year – an all-new Volvo S90 T5 luxury sedan.

To qualify for the Be a Changi Millionaire promotion, shoppers will need to spend a minimum amount at Changi Airport’s public and transit areas to be entered into a draw.

How to Be a Changi Millionaire Cash Prize Winner

Between 4 May and 31 October 2017, spend S$50 in a single receipt at Changi Airport for a chance to be selected as one of shoppers with a shot at the S$1 million cash prize. Each month over the six-month period, one lucky shopper will be picked to go into the Grand Draw for the cash prize and take one step closer to becoming a Changi Millionaire.

In addition to the six lucky shoppers, a seventh shopper will be picked from qualifying shoppers on iShopChangi – Changi Airport’s online shopping portal. An eighth will be added from the Platinum members of the Changi Rewards loyalty programme.

For those eyeing the luxurious Volvo S90 T5 sedan, an accumulated spend of $S500 in a single day is required to enter into the draw for the chance to drive away with the car.

Each month over the six month period, one lucky shopper will be selected to be a finalist with the opportunity to win the car prize.

Face-off for the Grand Prizes in 2018

To determine who becomes a Changi Millionaire and wins the two grand prizes, the 14 finalists (8 for the cash prize and 6 for the car) will battle it out in front of a live audience in 2018. All finalists, except those living in Singapore, will win a three-night hotel stay in Singapore.

One winner will walk away with the S$1 million grand cash prize and another with the all-new Volvo S90.

During the six-month promotion period, four Volvo S90 sedans will be on display at Changi Airport. Shoppers can also look forward to interactive game to win instant prizes such as shopping vouchers from Changi Airport’s retail outlets or at the event microsite.

“The “Be a Changi Millionaire” promotion has been growing in popularity amongst our shoppers from around the world and is now instantly associated with Changi Airport’s exciting retail offers. We are always looking at how to inject more buzz and excitement for our shoppers and with the introduction of the all-new Volvo S90 T5 luxury sedan as an additional prize on top of the million dollars, Changi Airport shoppers now have even more chances to win and to win big,” said Ms Lim Peck Hoon, Executive Vice President, Commercial, Changi Airport Group.

Be a Changi Millionaire 2017 Promotion