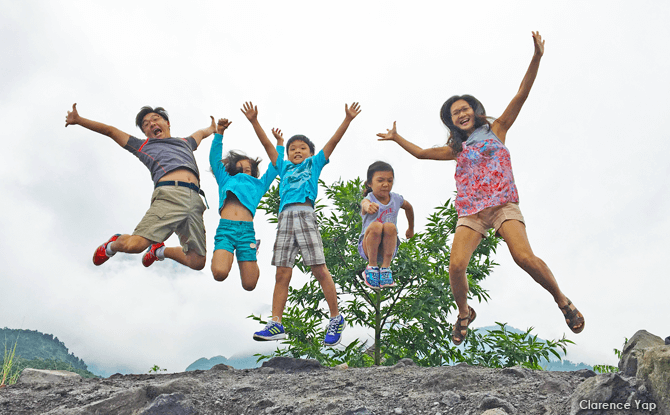 Ah, wake up and smell the New Year.

Any of these sound familiar?

However, many of us have given up making resolutions because they have a higher chance of being broken than the voice of an adolescent boy. In fact, some studies have shown that 25% of resolutions never make it beyond week one, and 36% disappear before you can even say, “February”.

As daunting as they may seem, these statistics should not thwart us from making New Year resolutions. Why? Because the value of resolutions is not in the keeping – it is in the making.

The making of New Year resolutions is a chance to reflect on what has passed and focus on what is to come. It is calibrating a compass before venturing into the waters ahead.

And as parents, each year is sure to bring plenty of uncharted waters.

Kids seem to grow up so quickly and development milestones come faster than New Year after Christmas. Parenting is a never-ending thrill ride and just like a rollercoaster, there are ups and downs, and the occasionally loopy-loop.

So, as we strap in for the exciting ride ahead, we share with you our top three parenting New Year resolutions.

Resolution 1: Go for the Slow Burn

We all want the best for our kids. Every day, we encourage them and tell them they can be anything they want to be – that all dreams are within their reach.

When young, every act merits a mini-celebration, making kids feel extra special. Watching your toddler stand up independently is a huge milestone and a child’s attempts to feed himself or herself deserve oodles of encouragement (probably to compensate for the noodles on the floor).

However, we feel that praises should have an inverse correlation with age. Why? Simply so that kids don’t grow up addicted to praise.

In this video, Simon Sinek comments on “failed parenting strategies” where parents told kids “that they were special, all the time; they were told they can have anything they want in life, just because they wanted it”.

This highlights the problem with constantly telling kids that the world is their oyster: reality is very different.

No one applauds for you for showing up on time (a 10 am meeting means starting the meeting at 10 am, folks!). No one gives you a promotion just because you think you deserve one.

So, rather than implanting the seed of blind self-belief into our kids, we should teach them to strive for whatever they want instead. They need to be taught that be the best they can be, they will need to work at it.

What’s more, they need to learn that the best way to achieve anything is to take it on step by step. Rather than seeing the mountain and expecting impatiently to be flown up to the summit, kids need to learn to take individual steps ever upwards.

That is why activities such as sports and musical pursuits are so valuable – there are no instant rewards with these disciplines. Instead, kids needs to plug away and persevere, for months and years, to grasp these skills. Even those with natural gifts will take time to hone and sharpen their abilities.

Oh, and the joy and accomplishment that comes about from conquering something that once seemed difficult is much more rewarding that instant gratification.

The adage “easy come, easy go” applies just as much to rewards as to everything else.

Instead of giving kids instant gratification that disappears just as fast, give them something to strive toward and that will leave them with something much more lasting.

Go for the slow burn this year.

In a story shared online, Alex and his young son, Tim, were waiting for a train. The train was delayed and after a long wait, impatient Tim insisted on walking to the next train station two hours away.

Father Alex explained to Tim that the next train would be arriving soon and that they be patient. Nonetheless, young Tim insisted on his way. To give Tim a chance to provide things to himself, Alex went along with Tim’s decision to make the walk. One hour in, the next train passed by father and son as they were trudging along.

Explaining why he had gone along with Tim’s plan, Alex said, “I lost a couple of hours that day. But I gained a whole lot more. My son learnt a powerful lesson in why he should trust his dad, even when he thinks he knows better.”

“Throughout the years, I’ve continued to give Tim the leeway to make certain decisions himself, and he’s done a great job with that freedom. But when I feel the need to step in, to prevent an especially poor choice or unnecessary pain, a few short words are enough to make a powerful impact: ‘Tim, remember the train.’”

This is an instance where a “controlled mistake” yielded a lasting lesson.

In another story, Reiko shared how her dad taught her a valuable lesson about drinking (obviously Reiko was a little older than young Tim). Her father took her out for drinks at a restaurant, nightclub, sushi bar, pub and “snack” bar before she passed out drunk.

The next day, she received a note from him that read, “To Reiko. Last night was fun. We should do it again sometime. Also, Reiko, do you know how much you drank last night to get in that groggy state? You had two beers and five chuhai. That’s your ‘limit.’ So from now on, when you go out drinking with friends, be sure to stop before you reach that limit. The world has some bad people in it, and some of them may want to take advantage of you. I can’t be around to protect you, so that’s why we did this, so you can know your own limit and protect yourself. I know you can do it. Love, Dad.”

Talk about a cool dad.

In both stories, the fathers were willing to let their children make mistakes in order to learn valuable lessons. Experience is a wonderful teacher and small mistakes can turn into big lessons. Rather than hovering over our kids, it is sometimes better to let them make mistakes and convert them into lessons they can value for life instead.

It seems that whacky internet challenges are here to stay. In 2016, no plastic container was safe from the Bottle Flip Challenge and life took a pause in the Mannequin Challenge.

This year, we propose an Insane Family Pose Challenge or IFP for short.

Here is how it goes.

First, pick a pose your family can own (okay, okay, dab if you must). Then for each month of the year, visit at least one place you have never been to before and capture the family doing the pose.

At the end of the year, compile the photos together into a photo book as a keepsake.

Remember to make the pose as crazy as possible. If you need some inspiration, get some cool ideas for family poses here!

Sound like a strange challenge? Surely not as strange as the Running Man Challenge right?

Have a great year ahead!