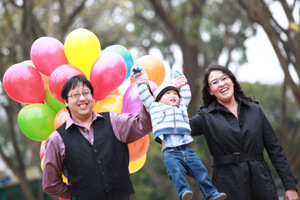 About a month ago I had my first crawling experience in decades. We were then at a children’s playground after a visit to a friend’s home.

Our son Z was excited to be on the move again, after being cooped up in a house for quite some time. He sprung to life, walking round and round the bottom of the play area, before finally deciding to climb up the ladder.

When he got to the top, Z made his way through the maze of walking platforms, finally stopping just at the entrance of a small tunnel.

It wasn’t a particularly long tunnel; nor was it a particular scary tunnel. It was, however, the first tunnel that Z had ever encountered. And he was not prepared to face it.

Modelling for Our Children

Looking at the look of uncertainty and doubt on my son’s face, I knew I had to do something. So I grit my teeth and squeezed myself through the tunnel. Once through, I turned around and smiled at Z.

The little boy hesitated, clearly frowning in puzzlement over the new development. Then I believe I detected a tiny cheeky smile on his face. Going down on his knees, he carefully and concertedly crawled all the way through the tunnel. Once through, he clapped his hands in delight, and promptly repeated the journey continuously for a couple more times.

As I reflected on the day’s events, I realised that Z’s story was a lesson in parental modelling & mentoring. I knew I had to crawl through the kid-size tunnel because my son wouldn’t do it on his own. Especially since I knew that he really wanted to do so, but lacked the faith and courage.

But once my son saw that his Daddy had to go down on his knees and squeeze through the tunnel, he not only “borrowed” his Daddy’s faith to enter it once, but also made the same journey back and forth continuously on his own.

It was truly a priceless lesson on parental influence and developing confidence in your child.

The Five Magic Beans & Their Adventures: How Two Families Make The Most of Singapore

Bite-Sized Parenting: 5 Ways To Encourage Good Risk-Taking In Your Child

Bite-Sized Parenting: 7 Parenting Podcasts To Tune In To