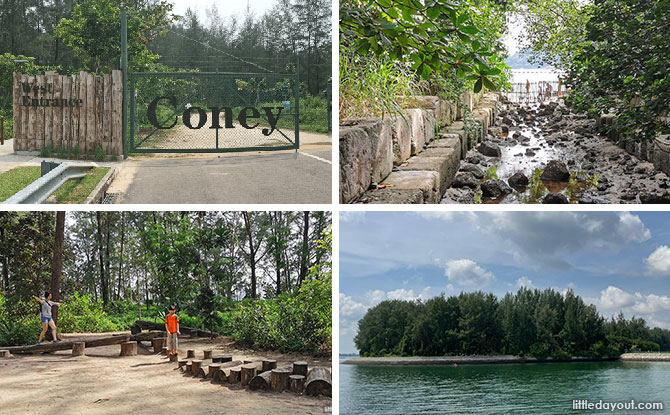 Once a millionaire’s island and wakeboarder’s paradise, Coney Island used to only be accessible by boat. On 10 October 2015, this changed with the opening of two bridges connecting the 50-hectare island to mainland Singapore, making it more easily accessible to the general public.

The island changed hands in the 1950s when it was sold to Indian businessman Ghulam Mahmood who harboured intentions of transforming it into a resort in the style of the amusement park at Coney Island, New York.

These plans fell through and it found its way back into the possession of the Singapore government in the 1970s. 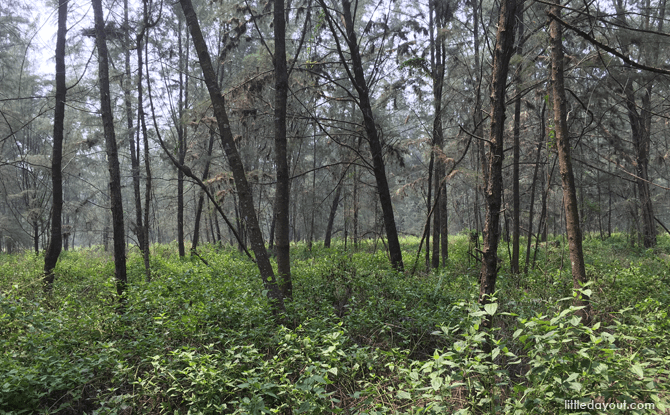 Today, the Casuarina-covered island in northeastern Singapore welcomes visitors to its rustic charms. NParks, which manages Coney Island Park, had chosen to preserve the island’s natural character and emphasized environmental sustainability in its development. And, that is a good thing. This means that despite being just 500 metres away from Punggol Settlement on the western end of the island, Coney Island Park still feels like a world away from urbanity. 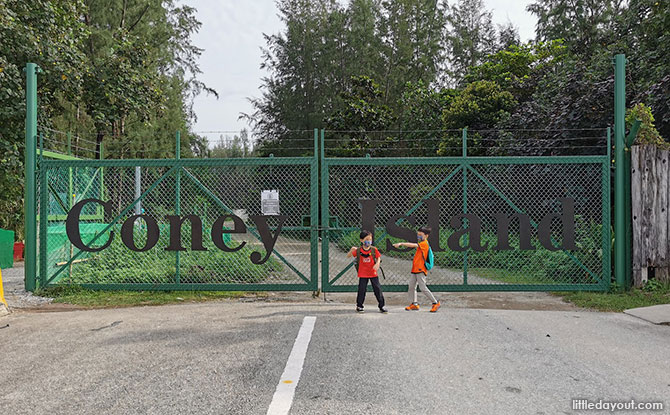 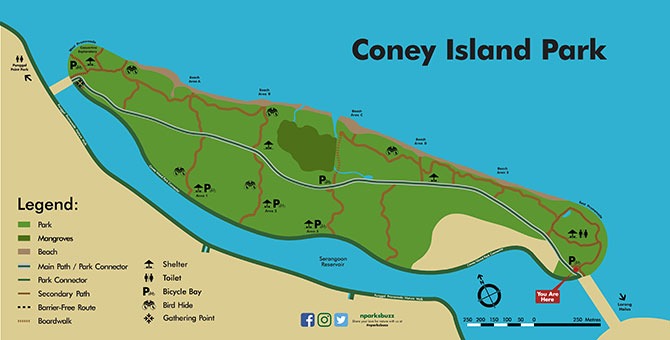 Here is a map of Coney Island Park, showing the West and East entrances. 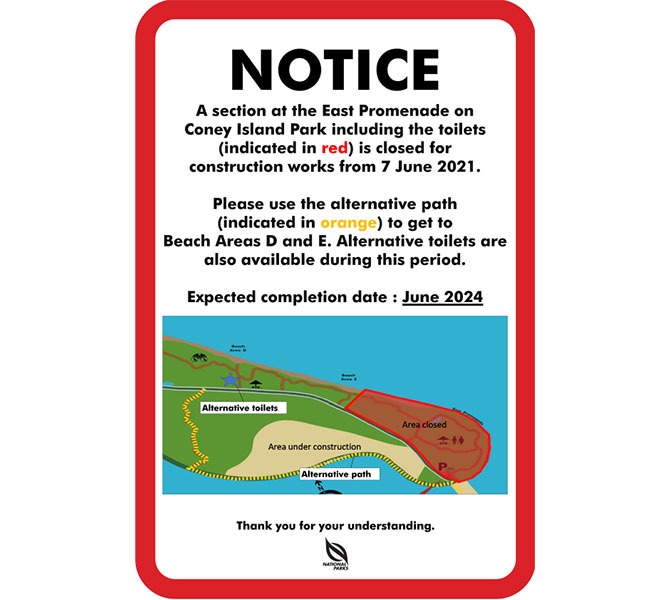 However, do note that due to the construction of the OBS facility, sections of the island on the eastern end, including the East Promenade, are closed off. There are alternative paths available.

The island’s Main Path down the centre of the island and is made of gravel and dirt. We wouldn’t recommend bringing prams into the island, unless you are planning to only visit the Promenade and Casauarina Exploratory areas. 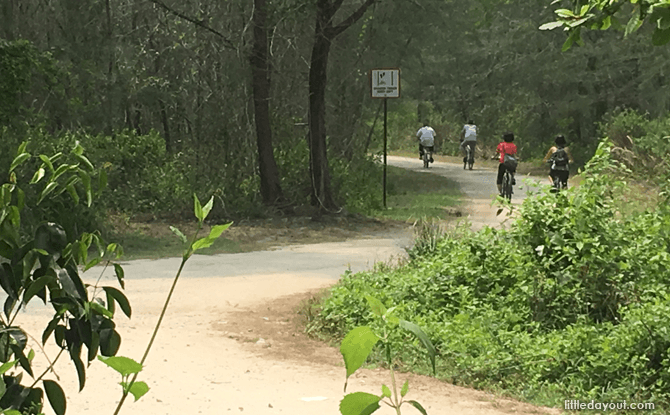 Cycling is highly recommended as you can quickly navigate various trails very quickly.

It is also generally flat ground hence children will find it fairly easy to cycle here. 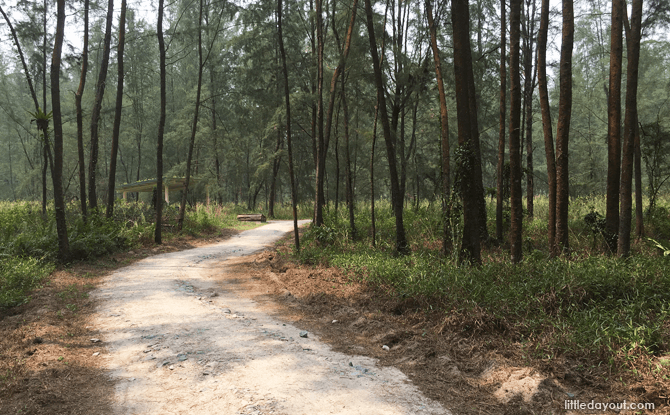 Earth paths run off from the Main Path to the island’s Beach Areas.

The nearest “legal” parking is actually at Punggol Settlement carpark, 700 metres away from the West entrance. 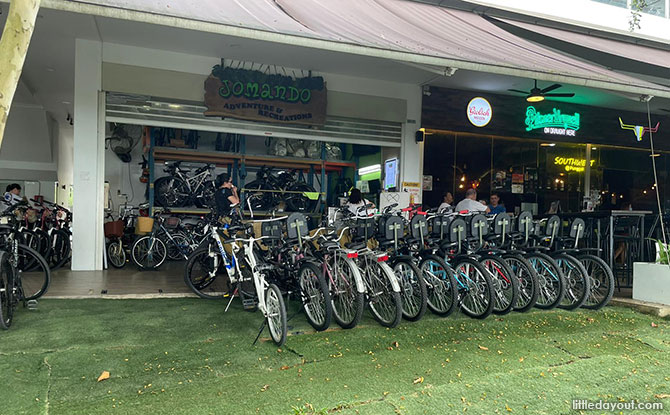 This is also where you can rent bicycles or pedal go-karts. Punggol Settlement is a convenient option for families looking a bite before or after visiting Coney Island since there are no food or drink stalls on Coney Island. There are a few restaurant here including the famous “House of White Bee Hoon” as well as a small 7-Eleven convenience store.

Alternatively, if you are thinking of heading to East entrance of Coney Island, you can park around Punggol East and cycle (recommended) or walk to Lorong Halus via the red bridge and up towards the East entrance. This can be quite a distance. A publicly accessible promenades can be found at the western end of the island. The paved areas provide a spot to enjoy the views of passing ships and Johor’s shoreline without having to venture too far into the island. 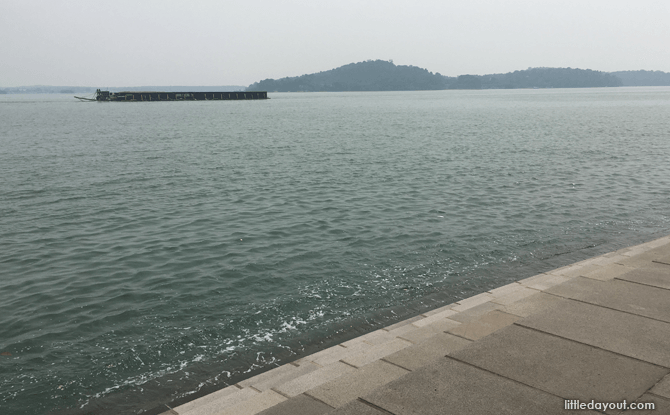 At the West Promenade, the curious can venture down some steps for a closer look at the water’s edge. 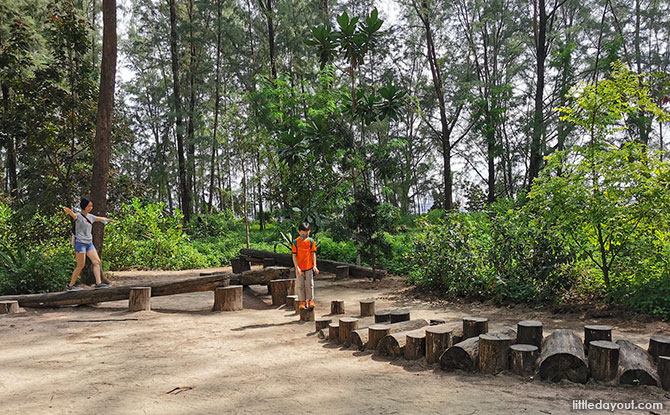 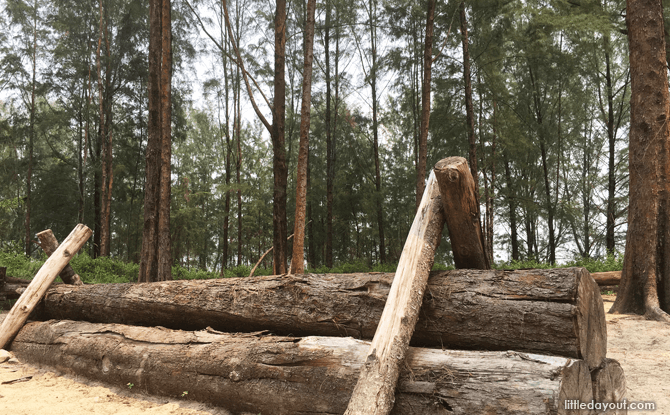 There are wooden bridges to step across and stepping stones to hop along and little triangular log fences for adventurous ones to climb over.

Plenty of fun for kids to have a go at. This is a good opportunity to show the children the kind of roots Mangrove plants have and the role of mangroves in the ecosystem.

Do also watch out for bikers along the stretch, especially those that do not dismount, much to our chagrin. 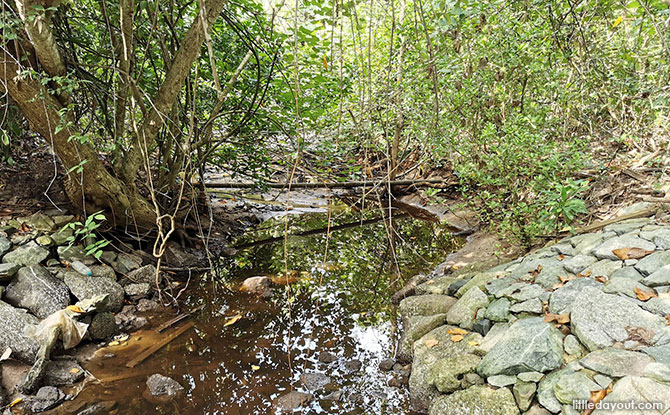 At Beach Area C lies the estuary. An estuary is a body of water found where the river meets the sea. This is also an important place for animals to find food, places to breed and stopover during migration. If you are looking for a rest spot, this is a cool place with shade to take a break.

#9 Try a Spot of Bird Spotting

Some of the endangered birds that have sighted on the island include the Spotted Wood-Owl, Red Junglefowl, Grey Heron and Rusty-breasted Cuckoo. It is therefore no wonder that NParks has chosen build three bird hides on Coney Island Park. 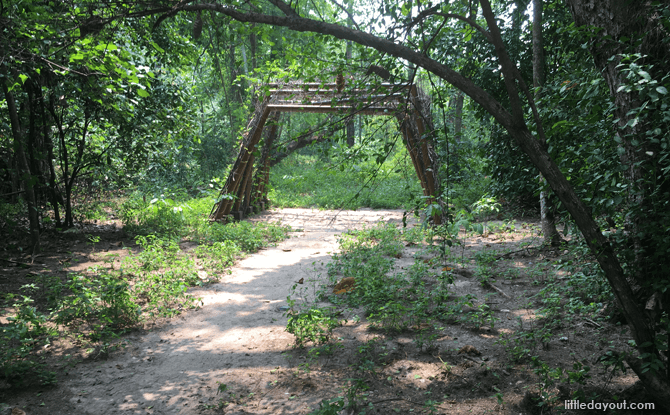 #10 There are Few Public Amenities on Coney Island Park 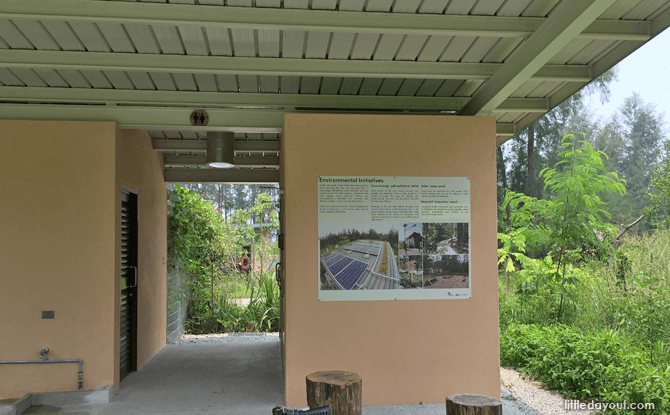 There are very few public amenities on the island. The main toilet on Coney Island Park is found at the western end of the island, 100 metres from the West entrance. It is run by solar power and rainwater is used for flushing and hand-washing.

The other toilets are potable toilets found nearer the Eastern end, near Beach Area E. You may be lucky enough to be able to spot an otter at Coney Island! As we entered via the East entrance, there was even a sign “Otters crossing”. Can you see the creature peeking out from the bushes? 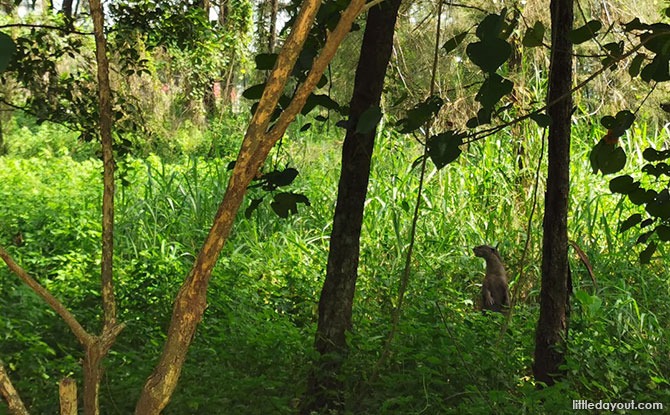 The Punggol otter family is often seen romping around Coney Island Park. It must be a breath of fresh air away from the dense urban places!

#12 Pretend you are Overseas Entering Coney Island might make you feel like you are overseas enjoying a temperate climate. Immerse yourself amidst the coniferous trees in this unique part of Singapore, walk down one of the trails and just listen to the birdsong. Perhaps what everyone really needs is some fresh air, forest-bathing and a chance to slow down. Works on the Outward Bound School on Coney Island has commenced. Hoarding on the Eastern side of the island indicates where entry is prohibited.

#14 Coney Island Used to Have a Free-roaming Cow

Well, technically, the cow on Coney Island was really a bull – a single Brahman Bull to be exact. No one knows when it decided to make the island its home but was left to wander around freely as it pleased.

On 12 October 2016, NParks announced that the beloved Coney Island cow had died. It was sedated for blood and decal samples to be taken during its annual health check by veterinarians on 28 September 2016 and could not be revived after that. Post-mortem investigations showed that it had chronic underlying illnesses and was likely to have died of lung and heart complications while sedated.

For the record, when it was alive, it was actually quite hard to spot the bull because of it liked to graze in the tall grassland areas of the island.

The Haw Par Brothers built a Beach Villa on the island when it was owned by them. After World War II, the villa was left in a state of disrepair.

It was previously off limits already after Coney Island Park reopened in 2015, but there were some who still ventured to seek it out. We believe the Haw Par Beach Villa actually sits on part of the island where the construction is ongoing.