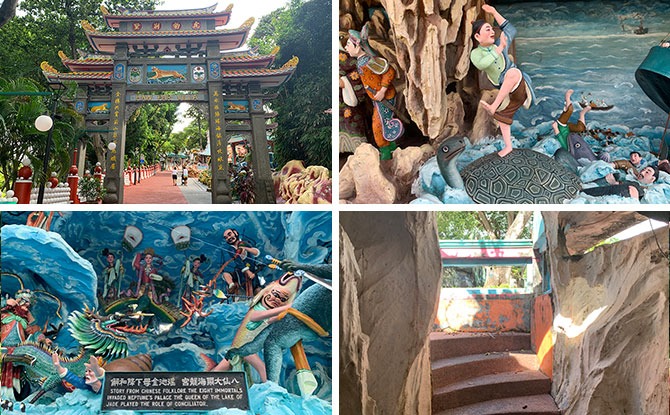 One of Singapore’s most unique and fascinating attractions, Haw Par Villa is a world lost in time. With statues and tableau that draw on Chinese folklore, legends and mythology, it is a one-of-a-kind park that is firmly off the beaten path. If you are looking to step back to a different era in time, Haw Par Villa is well-worth a visit. It is a genuine, one-of-a-kind cultural treasure. 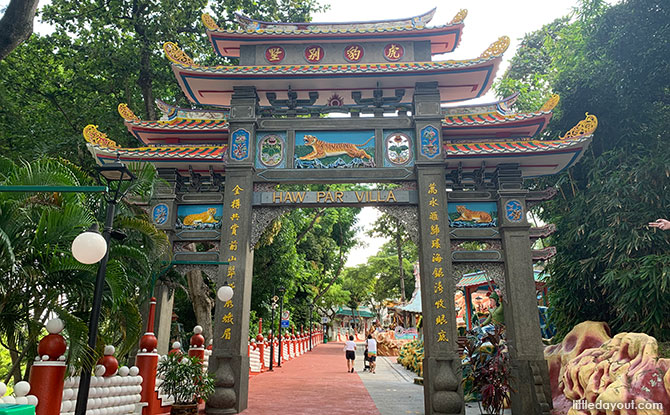 Built in 1937, Haw Par Villa is an octogenarian and was originally the Singapore home of the Aw brothers. The Burmese brothers had originally made its fortune from the Tiger Balm medicated ointment and the hillside villa at Pasir Panjang was a gift from elder brother Boon Haw to his younger sibling, Boon Par. 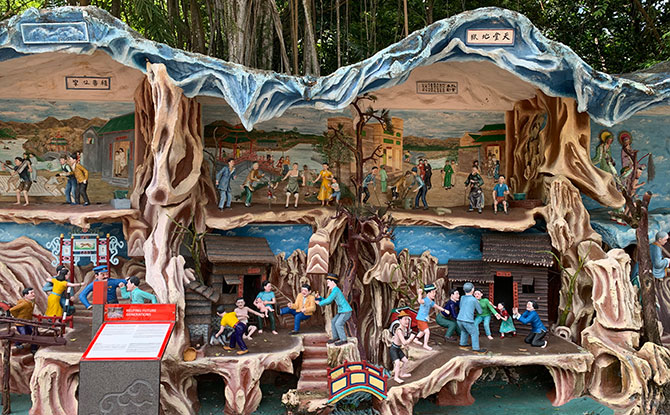 The landscaped park is decorated with statues that portray scenes from well-known oriental tales. Many of these convey Confucian, Buddhist and Taoist values including filial piety, respect and loyalty. It was the theme park of its day and offered a form of edutainment before the term was even coined.

Examples of stories portrayed in stone at Haw Par Villa include Madame White Snake, a story of good and evil, the Eight Immortals and the folktale of Journey to the West.

In an age without television or the Internet, visitors to Haw Par Villa could view these statues and dioramas, picking up traditional Chinese values through moral tales.

It was recently closed for renovations and has reopened to the public on 1 July 2021. Here’s a look inside and spots that you should not miss out on when visiting Haw Par Villa. At Haw Par Villa, a unique feature is that visitors can walk among the sculptures. This is a chance to take some interesting pictures. There is no need for trick-eye party tricks here. At some of the dioramas, you can follow little pathways that meander among the sculptures.

Just be considerate and observe the “No climbing on the sculptures” signs.

As you wander through the park, enjoy the old-style music from the 1940s and 1950s that is playing too. It adds to the old-school feel of the attraction.

Signboards to Help Interpret the Legends 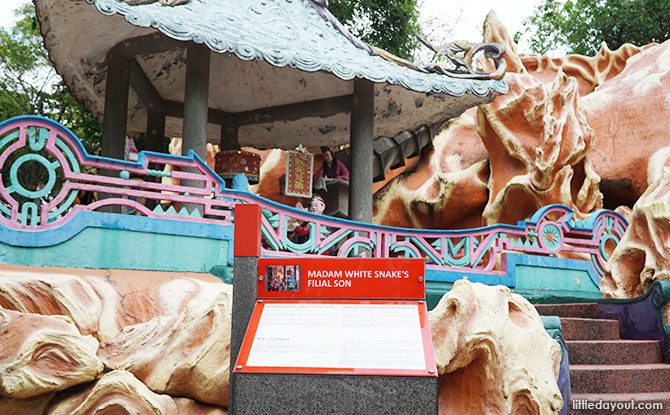 The park has 1,000 plus sculptures and these are no doubt a bit part of Haw Par Villa’s surrealistic mystic and authenticity. These are accompanied signboards (that come in the four national languages) which were added in 2019.

Pause and read the signboards to interpret the dioramas and tableau of Chinese folktales and legends in front of you.

Sculptures at Haw Par Villa can get a bit graphic, gruesome and grotesque. They are designed to shock in order to capture visitors’ attention.

Remember that inside Haw Par Villa, also known as Tiger Balm Gardens, you are stepping back in time to the 1940s and 1950s and this may not agree with modern sensibilities. 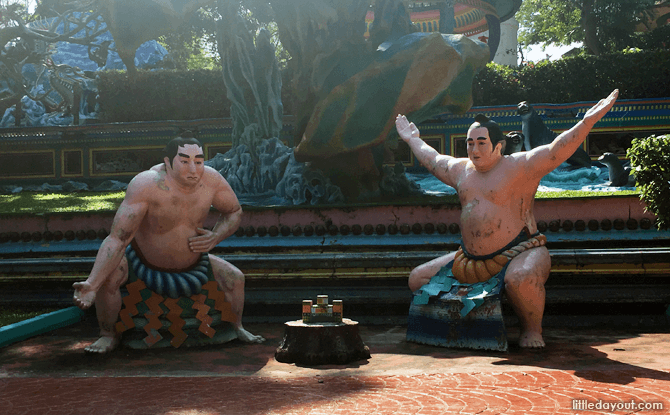 There are also sculptures, such as sumo wrestlers and the Statue of Liberty, which were added in the later years in an attempt to update the park. 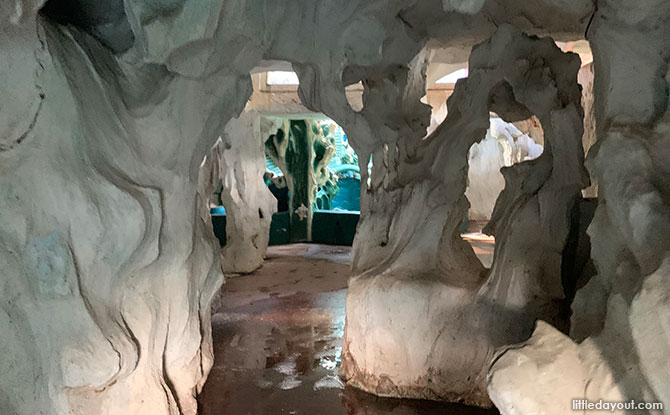 One of the interesting places to visit can be found at the Eight Immortals diorama. Visitors explore an underground grotto with multiple exits and entry points hidden behind the diorama.

Animals Sculptures at the Hilltop

In an era before the Singapore Zoo, Haw Par Villa even had its own private zoo. These animals were eventually taken away and replaced by their statue counterparts that can seen across the park – as if the live animals were petrified.

You can still view them at the top of the hill where the villa used to stand. 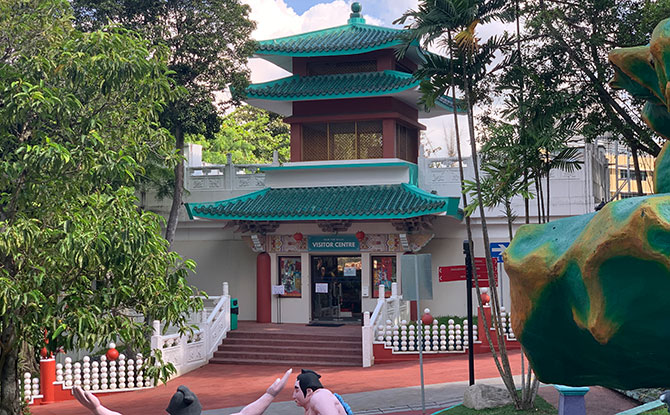 The 2021 revamp of Haw Par Villa has now seen the inclusion a small museum which is open from 9 am to 9.30 pm. 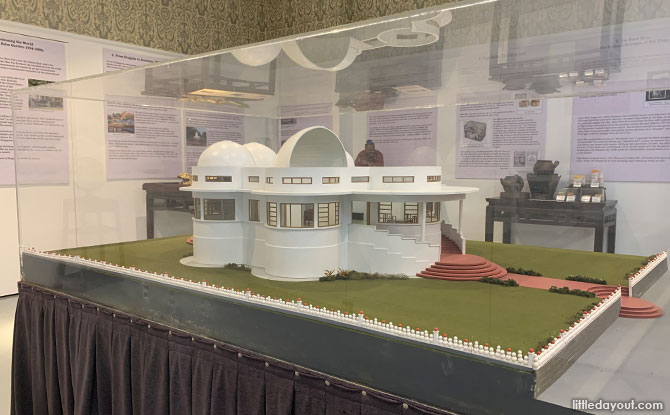 Pay it a visit to view a model of the original Haw Par Villa. It also has several write-ups about the Aw brothers and the grounds.

You may be wondering where is the actual villa building? It not longer stands on the grounds that bear its name. With the outbreak of World War 2, the Aw brothers fled Singapore and abandoned the six-room villa. It was used by the Japanese during the occupation years. 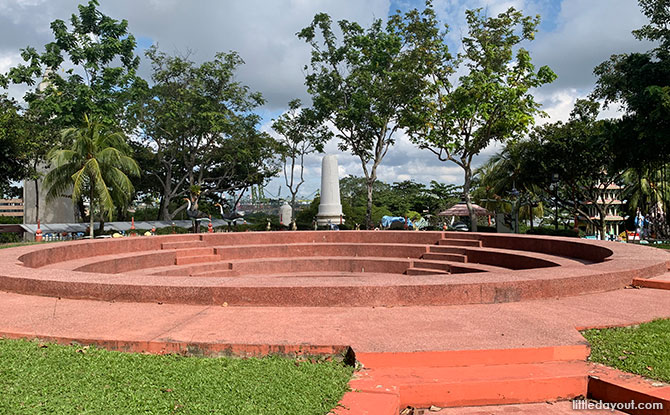 After the war, when Boon Haw returned to Singapore from Hong Kong, he was greeted by a damaged villa and news that his brother had died in 1944 in Burma. He was so anguished that he had the hilltop villa demolished, leaving a void in its place.

Even though the grand villa had only existed for 8 years from 1937 to 1945, it name still lives on to this day. 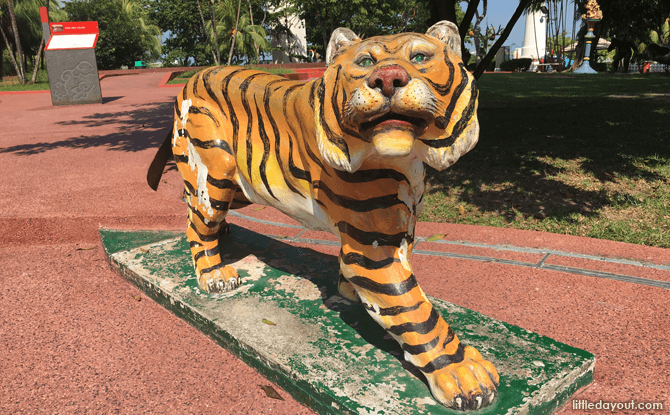 A pond in the shape of the Aw family name still stands at the top. Incidentally, Haw means Tiger in Chinese while Par stands for Leopard. This is why you will find sculptures of Tigers and Leopards throughout the park.

Around the grounds of Haw Par Villa are memorials to the Aw’s in the form of stupa-shaped monuments. There are four in total. The smallest is for Boon Haw’s son, two medium-sized ones are for Boon Haw and Boon Par while the largest is a monument to the Haw Brother’s parents and is built as the tallest as a mark of respect. 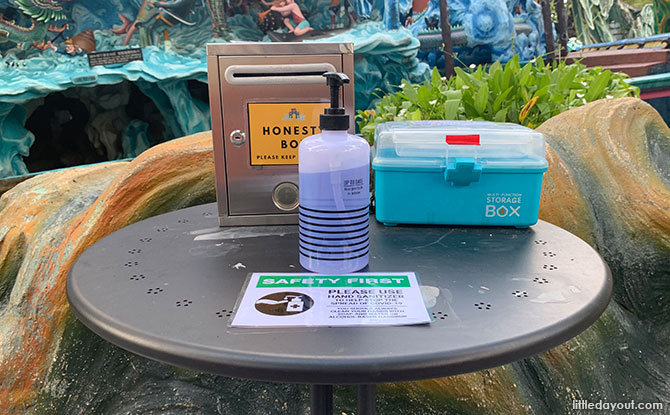 In its heyday, Haw Par Villa had a common place in the lives of Singaporeans and it was Boon Haw’s wish that the public could visit the gardens for free.

It was not uncommon to go on a primary school excursion or family day out to Haw Par Villa. These probably led to some nightmares amongst children growing up in the 1970s and 1980s.

One of the updates that has been given to the park in 2021 that we noticed is the available of fish feed. There are boxes where families can pick up some fish food to feed the fish in the ponds and leave behind a payment in an Honesty Box. Actually, we couldn’t find the fish feed, perhaps it was not out yet, but the intention is there.

There was also some colouring activities in the Museum and bubble-makers at the side courtyard too.

Many people will remember Haw Par Villa for its infamous Courts of Hell. This is located at the lower level of Tiger Balm Gardens. Built as a warning to live a virtuous life, it is filled with disturbing dioramas illustrating the judgments in hell awaiting liars, cheaters, murderers and other unsavoury characters.

This is currently close to the public and will be reopening in the later part of 2021 as the Hell’s Museum. Look out for more details to come.

Haw Par Villa is one of the most intriguing, bizarre and slightly scary places to visit around Singapore. It is now open to late till 10 pm.