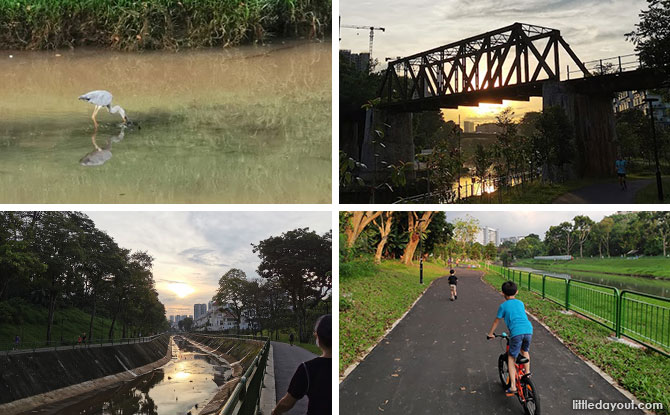 Joggers, cycling enthusiasts and families would enjoy a visit to the Ulu Pandan Park Connector, part of the Park Connector Network (PCN). This park connector stretches all the way from Buona Vista to Pandan Reservoir and Jurong East, passing by housing estates at Ghim Moh, Ulu Pandan, Clementi and Sunset Way. It is accessible from Buona Vista and Dover MRT stations.

Ulu Pandan PCN is also part of the Western Adventure Loop, which is connected to the rest of the city via the Round Island Route. 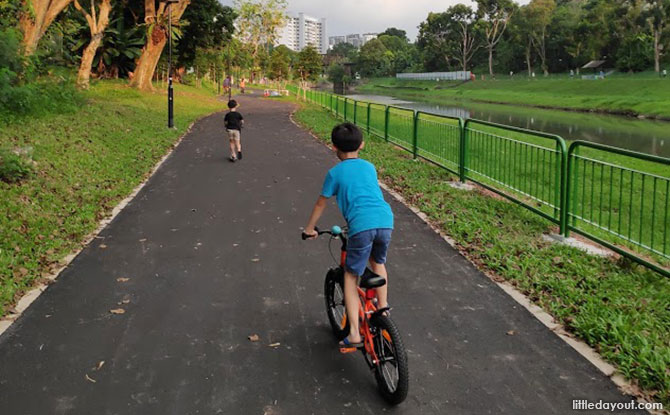 While cycling and scooting along the Ulu Pandan Park Connector, we have experienced how smooth the track is. Joggers and walkers exercise along the track, parents stroll by with their babies in strollers; folks on foldable bikes and younger children on balance bikes navigate the paths easily too. Caregivers can also be seen accompanying people on wheelchairs, enjoying the picturesque views of the surroundings.

The recently completed paths on the North bank of the park connector will lead you to the brand new elevated bridge over AYE which connects Pandan Gardens and Clementi.

Avid explorers can venture on to Pandan Reservoir nearby.

Flora and Fauna at Ulu Pandan 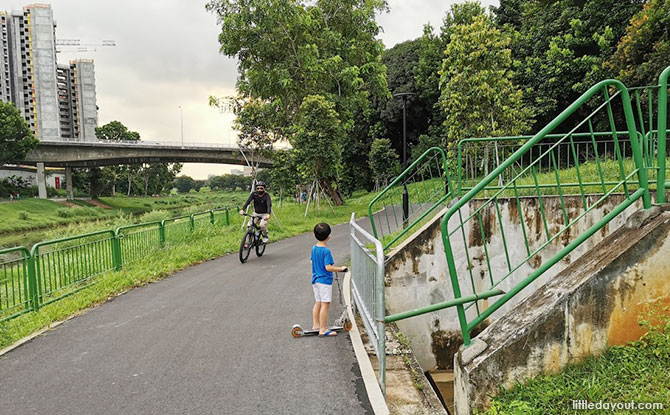 The North bank of the Ulu Pandan Park Connector is a wonderful way to see the flora and fauna of the area. 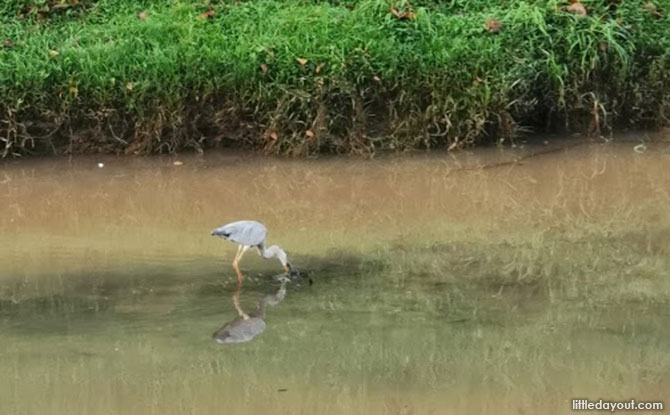 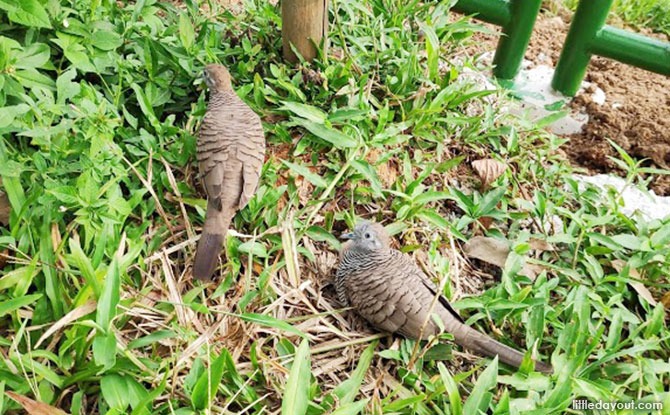 A look into the canal, particularly in the mornings and late afternoon, to see birds feeding off the fish or searching for prey amongst the grassland. The forests near Dover MRT station are also home and roosting grounds of many of the animals.

Apart from the creatures in flight, there is plenty to see at the canal including families of otters, monitor lizards, fish and tortoises. We have even witnessed two families of otters “greeting” one another over an apparent territorial dispute.

Children will be pleased to spot flowering plants and trees especially during the flowering season. As the vegetation grows lusher, expect to see even more wildlife in time to come.

Other Points of Interest at Sungei Ulu Pandan Canal 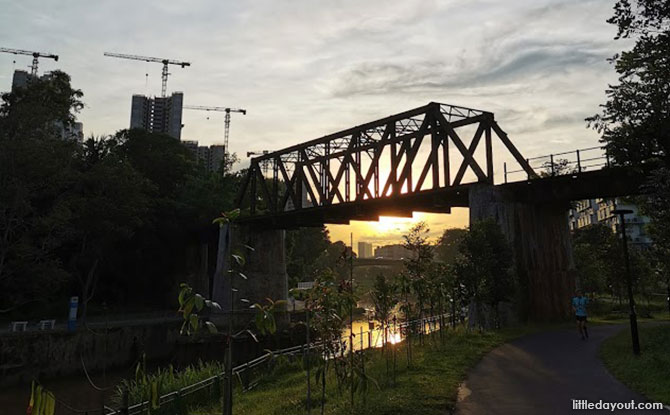 Joggers and cyclists can’t miss the few landmarks along the Ulu Pandan Park Connector. The now-defunct railway bridge across Sungei Ulu Pandan was part of the old Jurong line.  This railway bridge is of a truss bridge design, similar to the truss bridges in Upper Bukit Timah and King Albert Park.

Remnants of farms still line the railway, and you can spot many fruit trees including durian and jackfruit trees.

Now community farming has taken over and is reminiscent of the old-school charm of the area. We even recalled seeing a cow at the land years ago, before it was reorganised. 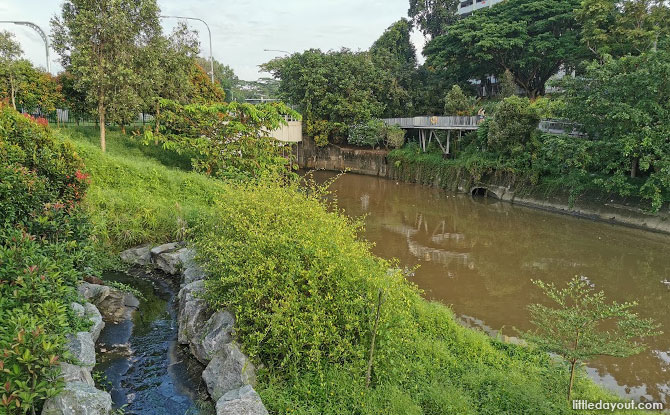 Apart from the bridge, there are several features built which adds to the tranquility of the place.

For instance, visitors can look out for large ponds used as sedimentation basins. These temporarily collects water from the drains and allows larger sediments to settle before cleaner water flow into the river.

Aquatic plants have also been planted to help absorb nutrients and enhances the landscape. 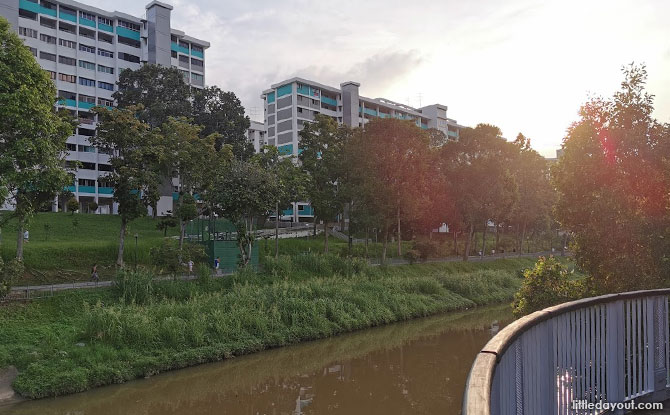 There is also a circular viewing deck where you can see water flowing from the drain to the river through a cleansing biotope which consists of plants that help cleanse the water. 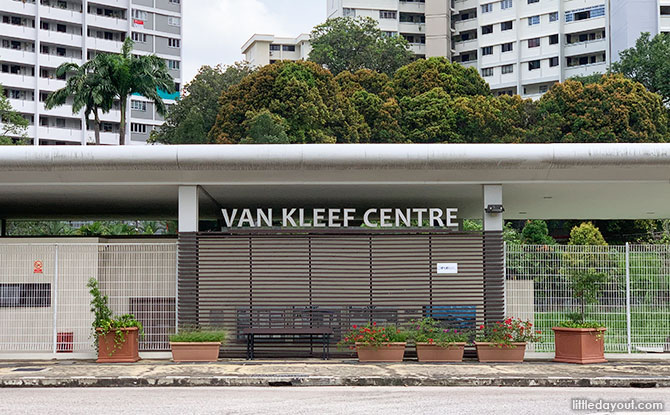 Nearby is the Van Kleef Centre, a water research centre set up by Singapore Delft Water Alliance. It was named after a Dutchman who bequeathed his entire estate to Singapore’s first modern aquarium at the foot of Fort Canning Hill. To gain easy access to the park connector, you can either choose to commute via MRT with your foldable bikes or scooters and alight at either Buona Vista or Dover stations. Alternatively park at different spots around the estates such as Ghim Moh, Ulu Pandan, Sunset Way or Clementi Avenue 4.

Venturing along the Scenic Route at Sungei Pandan Canal Pay a visit to the Ulu Pandan Park Connector and enjoy the breeze caressing your face while enjoying the fresh air and scenic surroundings. Westies will be glad to enjoy this park connector. Perhaps you might spot an eagle or an owl while on your adventure!