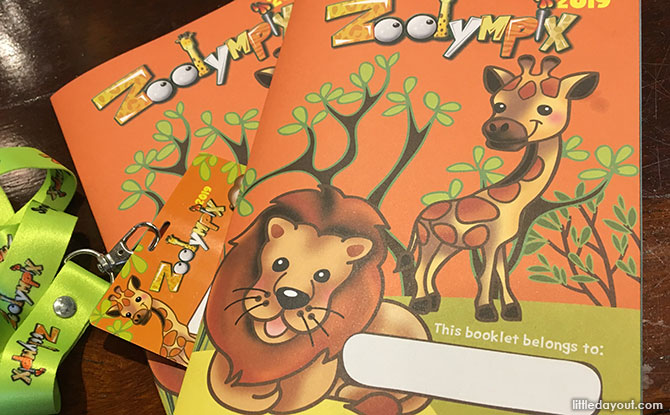 Here comes a Lion! The Circle of Life Festival, is the Singapore Zoo and Night Safari’s celebration of creatures big and small in tribute to beloved characters of the all new Disney’s The Lion King. Both parks are offering an array of themed activities from dawn to dusk from 1 June to 31 August 2019. 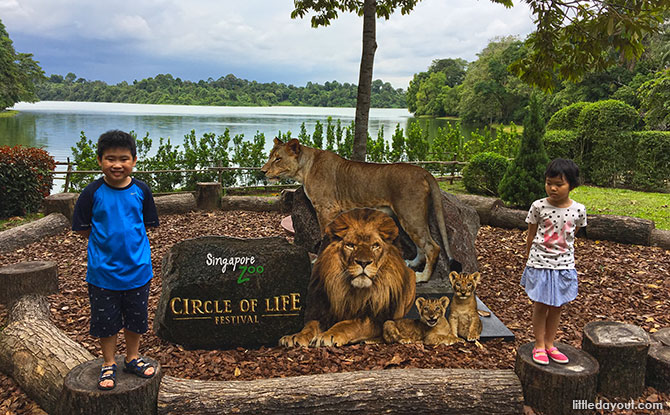 Bright-eyed on a Saturday morning, we had a quick chow down of pillowy steamed custard and chocolate-filled animal buns from Mandai Mart next to the Zoo entrance. Then it was off to check out the exciting festivities for the day!

We started our journey on the Circle of Life Wildlife Tour to meet the inhabitants of Pride Land. As the children love cats of all shapes and sizes, it was a thrill for them to get up close and personal with the big cats. 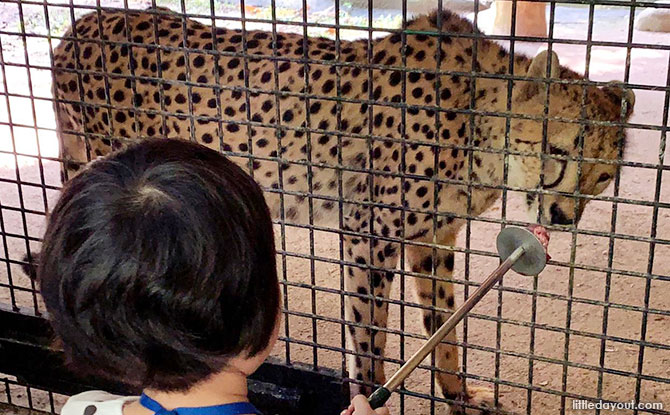 We were introduced to the lovely Deka, the Singapore Zoo’s very tame three-year-old cheetah, raised by the vets and keepers as she was abandoned by a first-time mother when she was a malnourished cub. It was love at first sight for my daughter who told me right away that the graceful spotted young feline gazing back at her was a “girl cheetah” even before we were told about her backstory by the very on-the-ball Zoo staff. The children were very serious in solemnly feeding her small cubes of speared meat!

Another highlight was the visit to the Lion King and his queen. You would never win a tug of war with a lioness! Her royal highness demonstrated her immense strength pulling on a huge rope with her teeth and releasing it with a loud slam against the glass screen of the enclosure, to the awe of the wide-eyed little boys especially watching intently. She was rewarded for her show of might with a huge slab of meat which she caught in her jaws and coyly took away to gnaw in the shade and privacy of her leafy enclosure.

Some of the more gungho visitors and brave little children on the tour were invited to feed handfuls of tiny wriggly mealworms to the meerkats. The meerksts are known to be superb diggers and looked really cute but alert as they took turns standing upright for “sentry” duties on the lookout for threats while their herd mates feasted and burrowed! 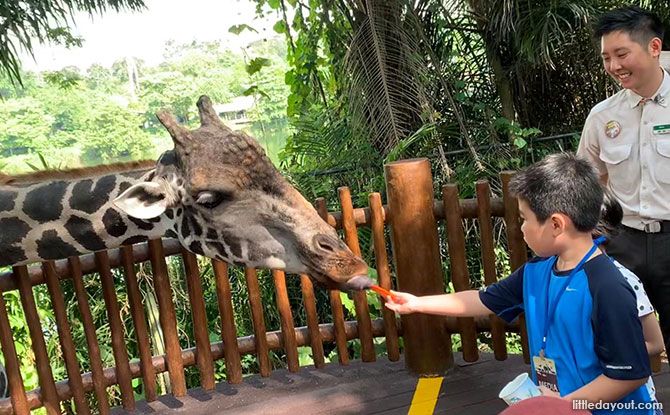 We also fed freshly cut carrot sticks to a pair of rather friendly giraffes with contrasting milk and dark chocolate spots to complete our interactive wildlife experiences with animals from the African plains. Visitors may also get the rare opportunity to feed the white rhinoceros, if they were in the right mood to be hungry!

Festival Tram with Music and Storytelling with Photo Spots 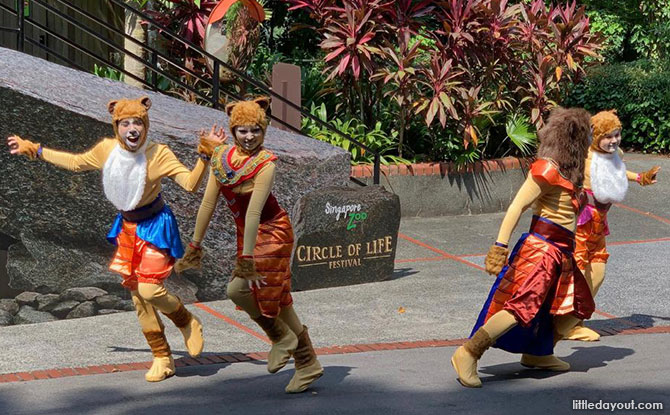 The centerpiece of the Circle of Life Festival is a savannah themed moving tram setting off from Singapore Zoo’s Wild Africa Zone every weekend, travelling pass the enclosures of animals such as the meerkat, mandrill and lion, the real life inspiration behind Disney characters Timon, Rafiki and Simba respectively. 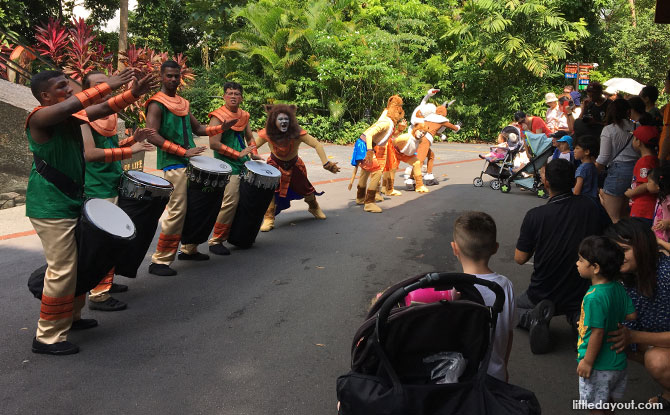 As part of the Festival tram procession, a troupe of percussion musicians will get visitors grooving to the beat with energetic performers dramatising a narrative around the life jourmey of lions at three different stations.

Along the way, visitors can catch three photo points that harken back to iconic settings of the The Lion King movie such as Pride Rock. The children were more interested in the real animals though but we could not resist capturing some really funny shots under the brilliant blue sky!

Zoolympix, the Singapore Zoo’s staple June school holiday activity, returns with a Circle of Life theme focusing on the animals from the movie. The children had fun learning about the ecological roles of creatures from the tall giraffes to the tiny invertebrates in the food chain by purchasing an activity booklet with craft activities and completing different challenges such as digging like a meerkat, hunting like a lion or decorating like a colourful mandrill in the self-guided trail at five stations thankfully located within close walking distance on a hot day and the reward was an exclusive set of animal pins.

We explored the rest of the Zoo, including the penguins, seals, zebras, ostriches, fruit bats, giant tortises, crocodiles, orang utans and the chimpanzee family. It was an exhausting blazing hot but fulfilling day out interacting with the Zoo’s inhabitants, leaving with happy memories and gorgeous photoshots.

About The Circle of Life Festival

In collaboration with the upcoming all new Disney’s The Lion King, Singapore Zoo and Night Safari will hold a Circle of Life Festival, a celebration of creatures big and small and the important roles that we all play in maintaining the health of the ecosystem.