The RWS Marine Life Park’s S.E.A. Aquarium, billed the world’s largest aquarium, provides a window to the diversity and richness of marine life.

While the tunnel at the entrance of the S.E.A Aquarium may give you the impression that you know what to expect, Little Day Out goes inside the Marine Life Park aquarium to give you a review of what is really there.

When you first enter the Aquarium, you will find yourself under the ribs of a shipwreck. The setting is the Strait of Karimata, somewhere between Sumatra and Borneo, and you get to see how marine life can thrive amongst a sunken wreck. 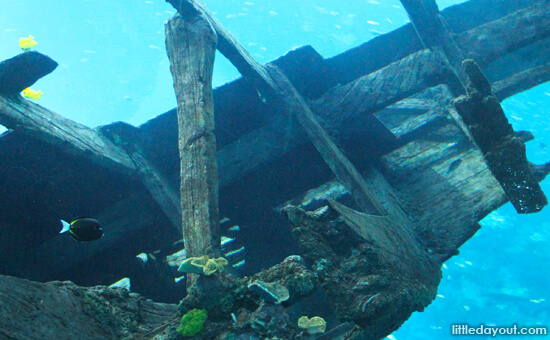 The conveyor belt and tunnel does not last very long. Beyond that, the room opens up to unveil a towering coral aquarium with bright fish painting swathes of colour around the coral centre. Along the walls is the Lens Zone where kids can try to spot shy seahorses and other creatures. 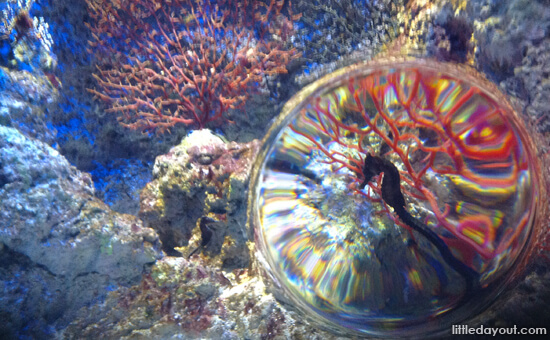 The Discovery Touch Pool nearby gives children a tactile feel of sea stars and sea urchins. We wondered out loud what is the difference between a sea star and a starfish and were told that they are one and the same, just that “fish” has been dropped from its name because “they aren’t fish”. 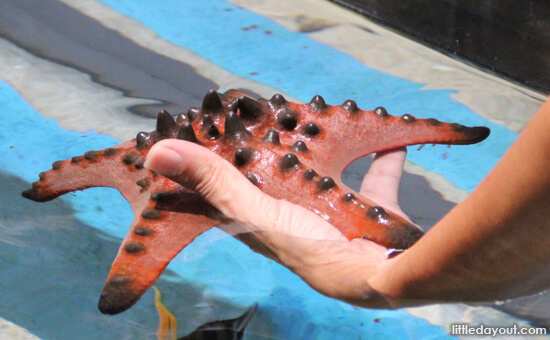 Rounding off the exploration of coastal regions is a mangrove swamp exhibit where you can get a glimpse of what goes on under the water, as well as above it.

Rolling in the Deep

From here, the next series of habitats lead you into deeper water. Fish swim in schools, deep-sea dwellers like giant spider crabs and the emperor nautilus appear, and you will soon find yourself surrounded by blobs of floating jellyfish. This all leads up to the centrepiece of the S.E.A. Aquarium – the Open Ocean Zone.

Hard floor turns carpeted and magical music greets you as this voluminous tank with a 8.3 metres tall by 36 metres wide viewing panel, filled with schools of fish, sharks and rays, comes into view. From the three levels of standing space, you get different perspectives of the inhabitants of the tank. This is great place to linger and to you help you do so, there are even inviting beanbags littered throughout the hall. However, the best view has to be right up next to the viewing panel where you can press you nose up against the viewing panel as the marine life swim by. 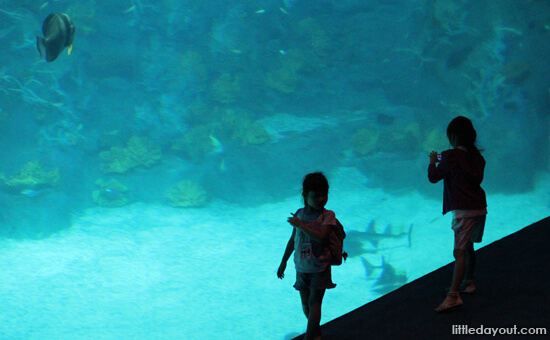 For additional vistas, an Ocean Dome area to the far right lets you to “step inside” the tank and gives you the enchanting feel when water is all around and above you. 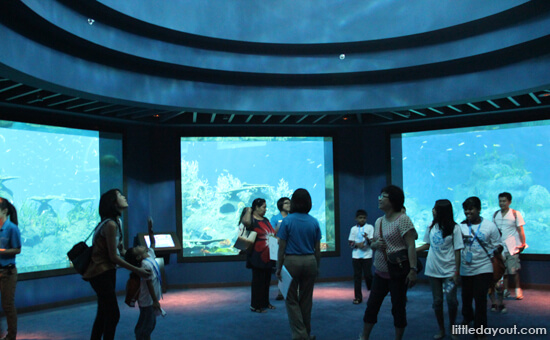 Leaving behind the majestic ocean, the back straight of the aquarium brings you marine life from the Arabian Sea, the Red Sea, East Africa and the South China Sea.

Look out for the flounder, an amazing flatfish whose eye actually migrates as it grows from a juvenile to an adult. You will also find habitats with the venomous pufferfish and lionfish here. Over at the moray eel habitat, kids (and adults) can squeeze into a viewing pod and stare down these carnivorous predators. 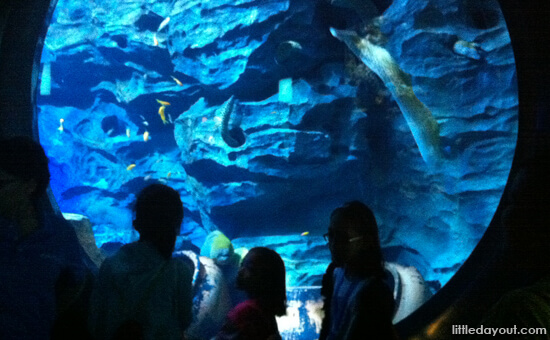 The final habitat before leaving behind the S.E.A Aquarium is the Shark Zone where you will find nurse sharks and black tip sharks swimming all around.

The star of the tank is the hammerhead shark. When we were there, we even overheard a little boy asking his mother to spot them for him, and they didn’t leave until she had done so. As distinctive looking as these creatures are, we too had some trouble spotting them but were eventually also able to do so. By our count, we were only able to spot four, but were told that there are 11 hammerheads swimming around the tank. See if you can count them all when you are there.

One thing we noticed was that many of the sharks in the tank are on the smallish side. It turns out that new aquariums will normally stock up juvenile creatures that can grow up in the aquarium environment.

Before you head out of the exit, don’t miss out a last view of the Shipwreck Habitat to the left. Those who have been to the Maritime Experiential Museum’s Typhoon Theatre can see if they can spot anything familiar. 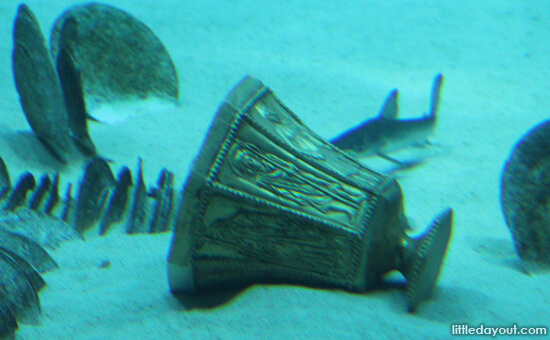 What we enjoy about the S.E.A. Aquarium were the towering scale of some of the tanks and the bright colours presented by the fish. Especially in habitats such as the Coral Zone, there are minute details to look out for and an ever-changing scene in front of you.

Information is well presented on digital signboards and interactive panels. The aquarium states that one of its goals is to educate and inform people about marine life. As a result, there are plenty of facts that parents can share with their kids, literally off the wall. The aquarium also offers educational tours. When we were there, their guides were taking various groups of children around. The energetic guides helped bring the exhibits to life for the children. The only downside is that these tours are offered at an additional charge to the entry price.

Our favourite habitat was the Open Ocean Gallery. The sheer scale of the tank and the different varieties of marine life moving through the water made for mesmerising viewing. The habitat does look a little under stocked. This is because the aquarium is new and additional fish will be introduced overtime. Nonetheless, there is still plenty to see within the habitat and, then again, the open ocean probably isn’t chock-a-block with fish either. With the opening of the S.E.A. Aquarium, there are bound to be comparisons with Underwater World, the other aquarium here in Singapore.

This made us reflect back to 1991 when we first stepped into the newly opened Underwater World. The overwhelming feeling then was one of awe as we made our way around a conveyor belt surrounded by water. Twenty years later, Singaporeans are now more well-travelled and getting harder to impress. Nonetheless, with the S.E.A. Aquarium, new experiences can be shared and enjoyed with our children, so that they too can recount back with awe.

As Constance Tan, a parent who was at the S.E.A. Aquarium with her four year-old son Zander, puts it,“There is so much beauty all around (in the different habitats) and it reminds me of the times I went scuba diving – with the added bonus of not having to get wet. I’m so glad to be able to share this experience with my son.”

The S.E.A. Aquarium is part of Resorts World Sentosa’s (RWS) Marine Life Park. Entry is through the Maritime Experiential Museum.

There is also small cafe within the S.E.A. Aquarium, as well as full restaurant right by the Open Ocean zone. For those who want something more extravagent, there are even 11 hotel suites operated by Equarius Hotel that look into the Open Ocean Habitat. Look out for them when they open in the first quarter of 2013.