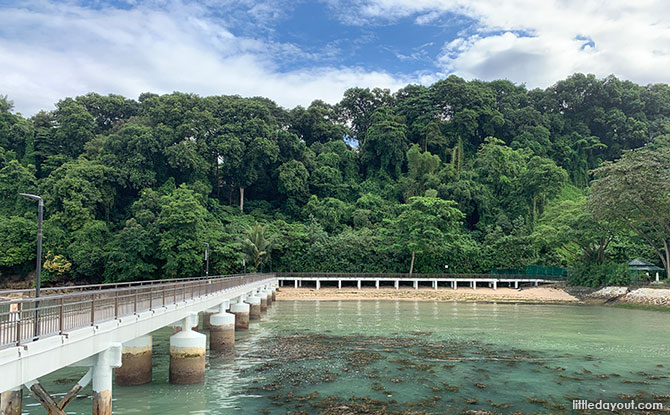 Once a haven for pirates, Labrador Nature Reserve, or Labrador Park as it is commonly known, has played many roles in the past. It was once a popular seaside getaway and bastion of imperial power at different points in its history.

Nowadays, Labrador Nature Reserve is a family-friendly recreational space where you are more likely to find coasting cyclists than thieving seafarers.

But don’t let its tranquil façade mislead you. With its colourful past, Labrador Park offers a diverse set of experiences for visitors. With everything from toddler-friendly playgrounds to forbidden tunnels, there is much to explore (and enjoy) at this southern park. 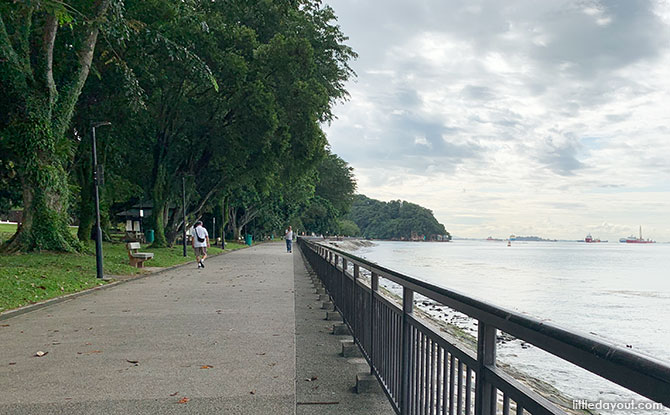 The Labrador Park seafront is the most accessible part of the park. With a broad promenade looking out to the water, the grassy park is perfect for evening strolls, scootering along, or just taking time out to enjoy the sea breeze.

This part of Labrador Park was actually reclaimed from the sea. The original shoreline was a hundred metres back toward the hillside. Then, it was known as Long Beach or Pasir Panjang in Malay, a name that now lends itself to an entire district of Singapore. 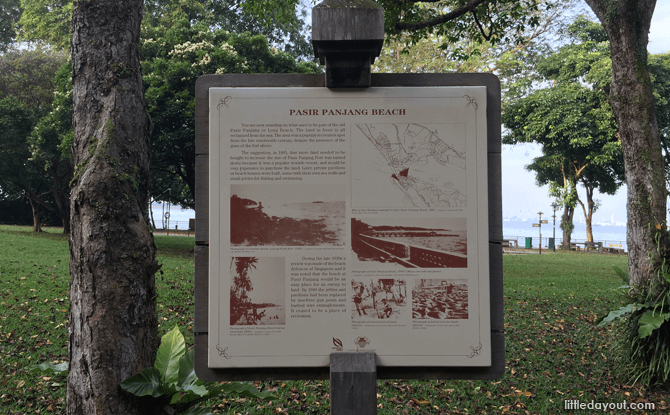 It is possible to walk, cycle or scoot along the waterfront from Labrador Park toward Keppel Bay. The park’s flat terrain is ideal for an easy stroll/ride/scoot and it offers views of Sentosa and passing boats. 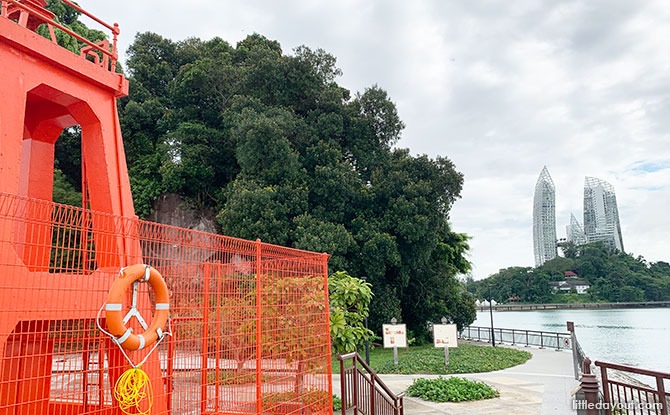 Along the water’s edge, you will find landmarks such as the Red Beacon, a navigational aid.

A replica of an even more ancient navigational aid stands around the corner. The Dragon’s Teeth Gate or Long Ya Men was a large rock that stood at the mouth of Keppel Harbour. Also known as Batu Berlayer in Malay, the area around it was well-known as a pirate’s hideout. Together with another rocky outcrop on Sentosa island, these “pillars” served as navigational landmarks for sailors.

The original rocks were blown up by the British in 1848 to allow larger ships into Keppel Harbour. The 6-metre high replica found here was erected in 2005 to commemorate Dragon’s Teeth Gate’s role in Singapore’s maritime history. 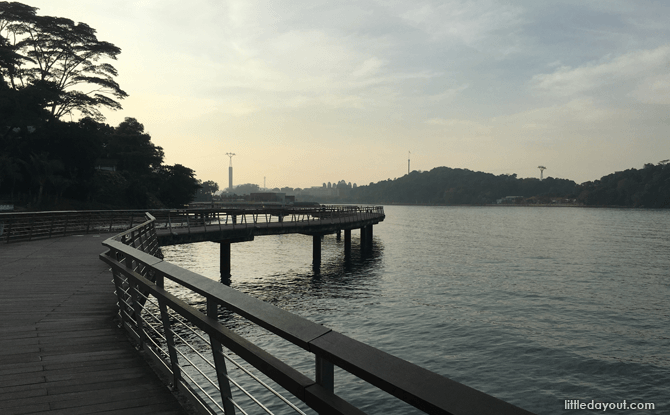 At the eastern end of Labrador Park is Bukit Chermin Boardwalk. The 300-metre boardwalk extends over the water towards the condominium, Reflections at Keppel Bay. 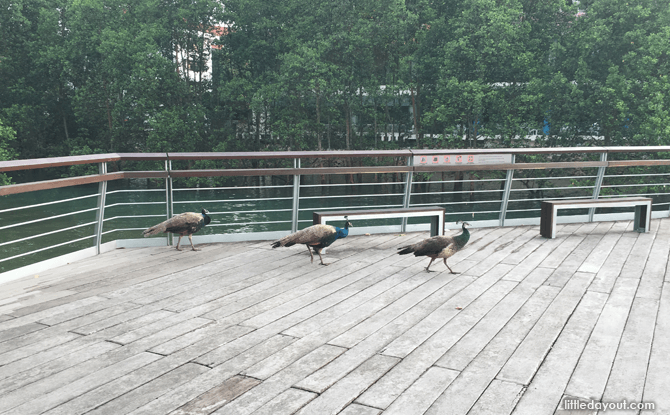 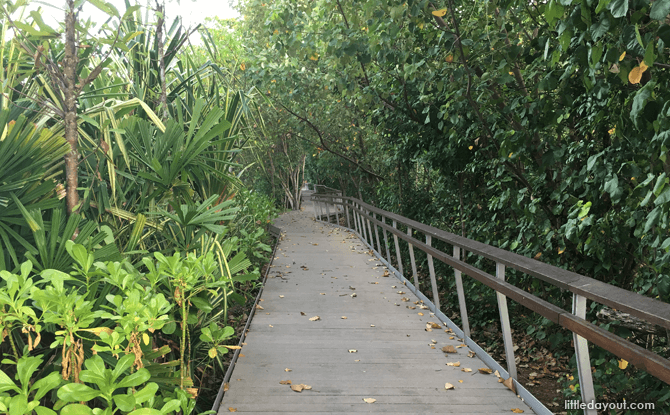 Another route to explore is the boardwalk along Berlayer Creek. This nature walk showcases the mangrove eco-system and leads to the Labrador Park MRT station – a 15-minute walk away. One other nature spot at Labrador Nature Reserve that is often overlooked is the Dragonfly Pond. This can be found along Port Road, on the way in to the park.

Labrador Park is home to not one, but two seaside playgrounds. 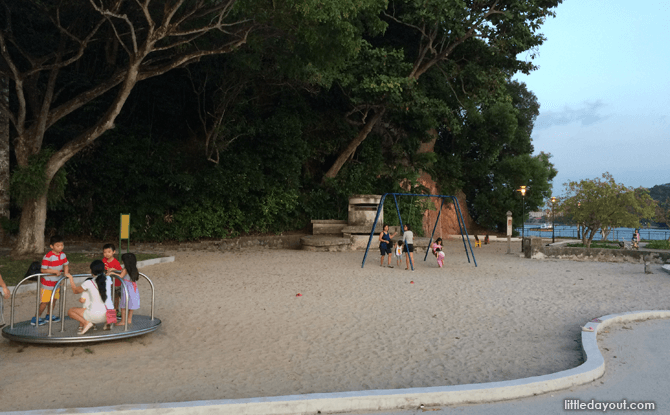 Deserving an award for the most unique location for a children’s playground is the one next to a World War Two machine gun pillbox. Close to Car Park C, it has a retro merry-go-round, pair of swings and two old-school see-saws.

The two relics from the past nearby are a machine-gun bunker built in the 1930s as part of Singapore’s coastal defence and a white-coloured obelisk. 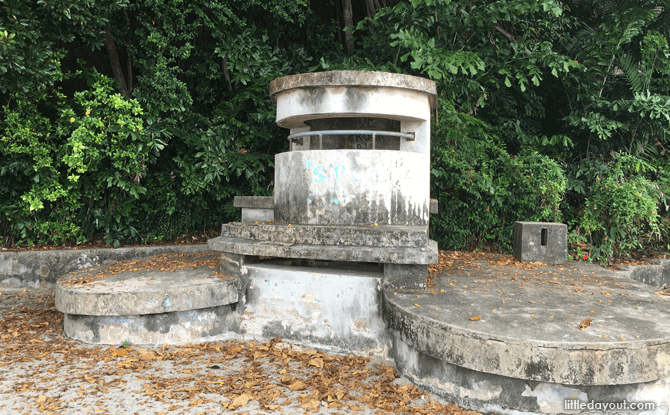 The machine gun bunker was built to protect a gun position on top of the hill behind it. Peeping inside, it is easy to imagine the uncomfortable conditions faced by the soldiers manning the pillbox. The obelisk is a leftover from Keppel Harbour’s colonial days. It marked the western limits of Keppel Harbour and was painted white to be easily seen by sailors. Labrador Park’s larger playground is anchored by a play tower. It has slides leading out from its side and a three-sided bouncy “see-saw” beside it. Also nearby is a unique timbre maze. At the far western end of the park is the Labrador Park Jetty. Fishing is allowed at the far end of the jetty. Take a stroll out along the jetty for a view of the rocky beach which makes Labrador Park a nature reserve. Leaving the sunny seaside behind, ascend the hill into what was formerly Fort Pasir Panjang. Built in the 19th Century, Fort Pasir Panjang was one-half of the defences, the other being Sentosa’s Fort Siloso, protecting the western approach to Keppel Harbour. Today, its remains are a reminder of a more turbulent era in Singapore’s history. The fort’s emplacements were designed to hold heavy guns and artillery. Two 6-inch Quick-Firing guns were in place during World War Two. You can see an example of these (albeit not the originals as they were destroyed to prevent them from falling into the hands of the enemy), together with statues of gunners moving the ammunition up from the magazine below to the guns. The pair of guns at Fort Pasir Panjang in World War Two were manned by a multi-ethnic group of soliders. Under the command of British regulars, local Malays operated the searchlights and Indians manned the guns. The guns stayed in operation till February 13, just before Singapore fell, and saw action in the Battle of Pasir Panjang. Nowadays, the din of war has been replaced by the songs of birds hiding in the treetops. Visitors can explore the trails crisscrossing the ridge and what remains of the gun emplacements. 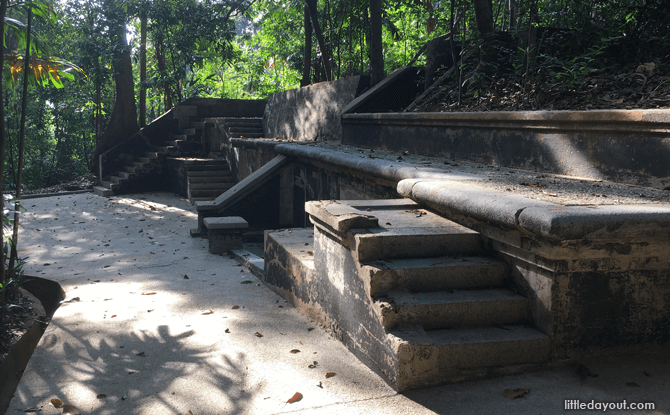 Be sure to supervise children and take caution around the structures as there are spots with sheer drops, not guarded by railings. The Casemate at the top of the hill were used as an ammunition dump. They used to be open to the public but can no longer be visited. Similarly, the tunnels leading under the gun emplacements are also out-of-bounds now. If you are curious about what lies inside, read about Little Day Out’s outing to the tunnels back in 2013 here.

A tangible part of the old fort that can still be visited is the brick wall at the bottom of the hill. This was the fort’s gate and was once spanned by a metal porticus. This portcullis lend its name to the nearby plaza, one of two along the promenade. The second plaza is known as the Pill Box Plaza. 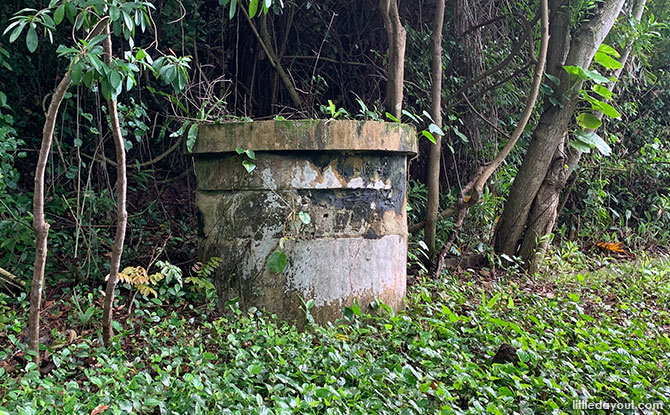 In case you are wondering why it is called that, go in search for the old World War II pillbox in the vicinity.

So, whether you are feeling like having a relaxing day out by the sea or exploring the dark reaches of Singapore’s past, Labrador Park caters to both instincts. Its rich past and welcoming present make it an esoteric park unlike others in Singapore, and a great space to explore.

One last point to highlight is that Labrador Park does not have a lot of dining options. There is high-end dining at the Tamarind Hill Restaurant (near Car Park A at the top of the hill) and, well, that’s about it. If you are looking for eateries in the vicinity, head over to Alexandra Retail Centre and the HarbourFront-VivoCity belt is just down the road too.

READ: Exploring the Remains of the Guns of Labrador