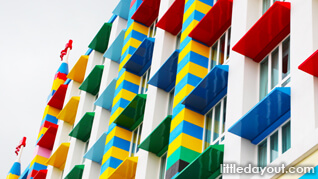 The children were excited once the building came into view. From afar, the hotel looked as if it was built from brightly coloured, gigantic lego bricks. There was no mistaking that we had arrived at the LEGOLAND Hotel.

At the hotel’s entrance, we were greeted by a huge LEGO dragon that roars with smoke billowing out of its nose every half an hour. Stepping into the hotel’s lobby, we experienced an overwhelming sense of nostalgia as we were immersed back into the childhood world of LEGO. Dominating the hotel lobby, a large LEGO castle and pirate ship provided a welcomed distraction for the children while we went about checking-in to the hotel.

The anticipation continued to build as we took the lift – decorated with huge pictures of LEGO characters – up to the room.

The deluxe room we stayed in wowed us. It was colourfully decorated and themed with LEGO characters. The boys just could not stop admiring and running around the room. The children’s sleep area was separated from the main bedroom space by a wall and a sliding door. It had a bunk bed with an additional pull-out bed underneath, perfect for our three boys. The excitement was heightened when the children found a quiz sheet in the room. Solving the quiz’s questions revealed a secret code which unlocked the treasure chest in the room!

Facilities in the room were designed with families with young children in mind – there was even a child-sized sink in the bathroom, installed at just the right height. One thing to note though is that the heater in the bathroom takes a few moments to heat up the water. It is best to let water run for a while before showering young children so that the hot water does not “suddenly come on” midway through a shower.

Dining at the LEGOLAND Hotel

The Bricks restaurant was where we had our meals during our stay. The spread of food was delectable and LEGO character mascots walking around the restaurant kept the kids delighted. A balloonist also came around to the tables to sculpt balloons for each child. A sure-fire hit with the kids at the restaurant was the fodue section which had yummy candies, mashmallows and delicious fruit skewers.

Conveniently located beside the restaurant was a play area. The children headed there to play after they had their meals while we stayed on in the restaurant to enjoy our own food. The soft, large-sized LEGO bricks were safe enough for toddlers and a staff was on hand to supervise the children, allowing us to carry on eating with peace-of-mind. Older children even have a separate play area equipped with an xBox Kinect to keep them occupied.

We enjoyed our stay at the LEGOLAND Hotel and with travel times from the Second Link to LEGOLAND being just 20 minutes (not including the time needed to clear immigration), plus the LEGOLAND Theme Park and LEGOLAND Water Park located just beside the hotel, it is a fun and easy getaway for the family. We will be back.

Things to Look Out For:

About the Little Day Out Contributor:

Shally is a mother of three boys who enjoys exploring new places, cooking and reading.