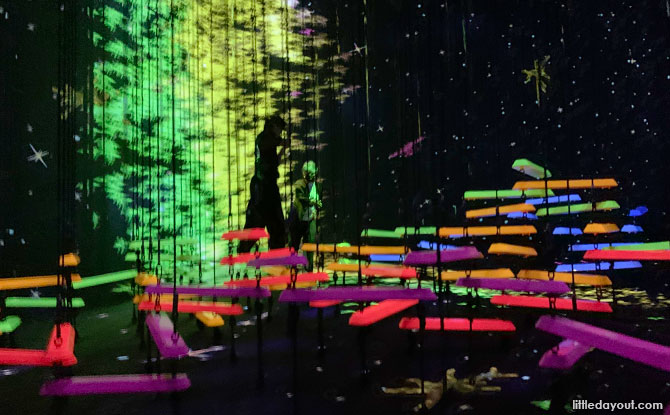 A frequented destination for families with young children is ArtScience Museum at Marina Bay Sands. It is little wonder why the museum is a popular space for play, creating and learning as it offers so much especially at its permanent exhibition – Future World.

It has also undergone a refresh with three new, highly interactive exhibits opening on 26 November 2022. 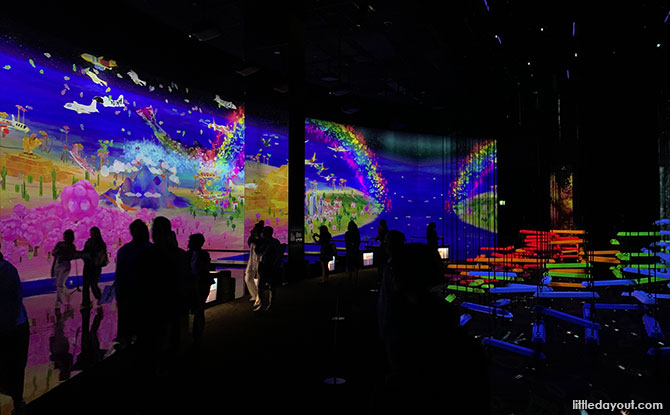 Exploring New Frontiers is a new section of Future World: Where Art Meets Science, located just before the Crystal Universe installation. It replaces the previous Park and Sanctuary sections of Future World.

This new section of Future World invites visitors to experience the wonder of flight and perspectives from above with three new interactive digital art installations.

Autonomous Abstraction, Continuous Phenomena from the Universe to Self 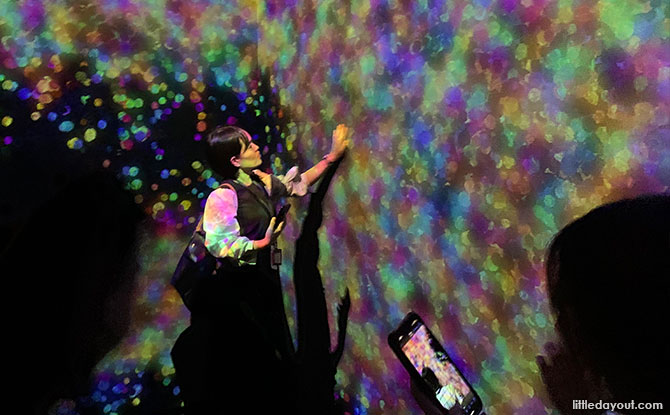 The flickering light points and abstract splashes of colour invoke the feeling of a spontaneous order, despite disorder. Visitors can get up close to the artwork projected on the walls and interact with them. In response, they ebb and flow, finding new order as they reorganise themselves. This digital art installations calls to mind the rhythms of the universe and a flight through the cosmos.

Aerial Climbing Through a Flock of Coloured Birds 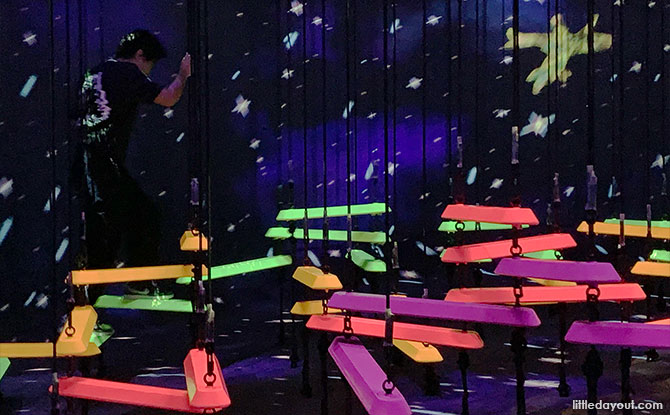 This work by teamLab requires visitors to physically climb across various suspended horizontal bars with surrounding flocks of birds soaring past. These flocks of birds also change colour as they interact with the people. It is an installation that completely immerses a person’s whole being into the artwork. 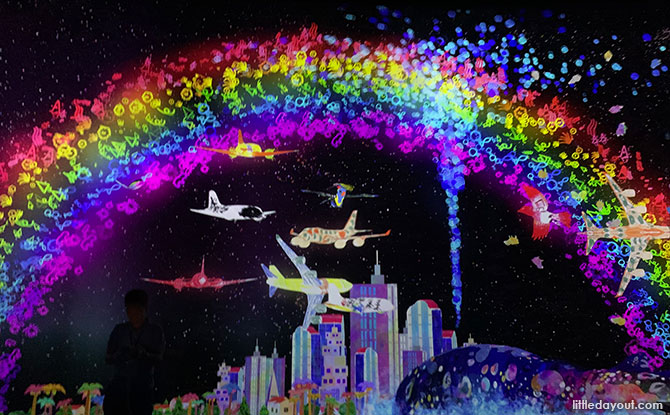 The third installation of Exploring New Frontiers may seem familiar but it really has a new twist. Visitors can draw and colour airplanes, birds and butterflies and have them scanned in to be sent up to a digital wall. 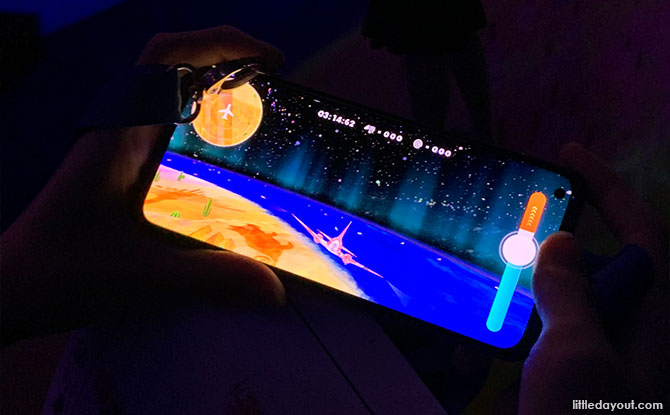 However, in this case, visitors can then use a tablet to take on a first person view from their creation, and even pilot the digital artwork around the wall. The view on the tablet also reflects the type of creature being controlled. For example, a hawk would have a sharper point of view while a butterfly has a 340-degree field of vision.

Overview of the Rest of Future World at ArtScience Museum 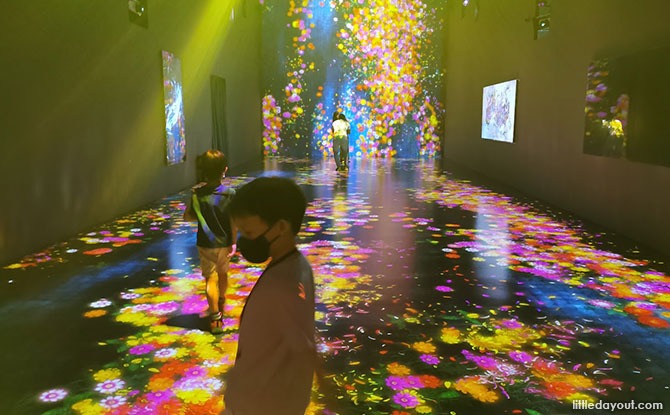 Future World was created by teamLab and ArtScience Museum and launched in 2016. teamLab is a group of ultra-technologists known for their use of digital technology as a medium for art. Future World consists of art installations and creative projects for both adults and children to interact with, play, explore. They are also reflective pieces that help us reflect on ourselves in relation to our world.

With the latest update, there are three themes altogether: City in a Garden, Sanctuary and Exploring New Frontiers.

Future World is where art, science and technology meet.

Each exhibit has a section for children that includes a suggestion for the child on what to think, act or do after the visit.

The opening section is dedicated to our perspectives of cities, and how nature can thrive in cities such as Singapore. Our founding Prime Minister Lee Kuan Yew had his plan to transform Singapore into a garden city, and this has since underlined our mission incorporating flora and fauna as a “city in a garden”. 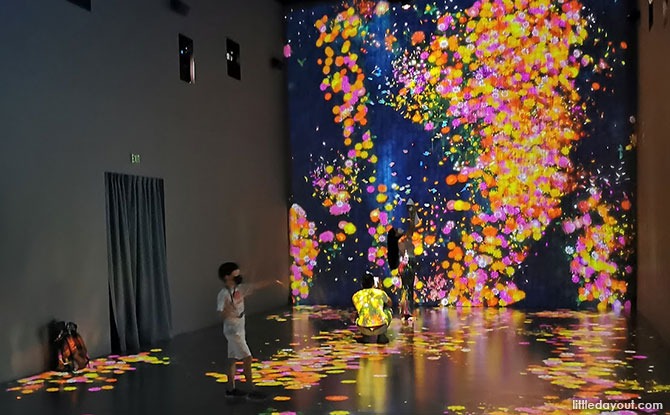 Get greeted by a cascading waterfall as you enter the first gallery. Universe of Water Particles, Transcending Boundaries is the name of the interactive digital installation. Visitors will interact with the waterfall and alter the flow of the water. This dynamic installation will respond to the movement of people. Children will also delight in trying to “catch” the butterflies and change the landscape.

The impact of the waterscape will lead to changes in the three artworks surrounding the room, highlighting the interdependence of nature on its environment. 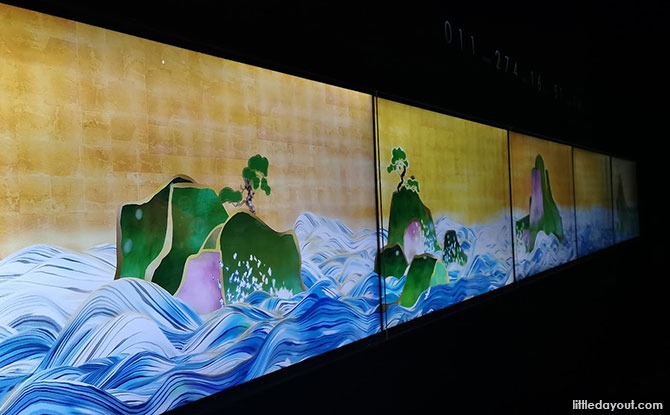 Exiting this gallery leads one to a traditional Japanese artpiece – 100 Years Sea. The sobering fact of rising sea waters as shown in the artwork draws attention to climate change. The numbers above the artwork represents the elapsed time and time is ticking. It provokes everyone to help to change that, in their own little ways. 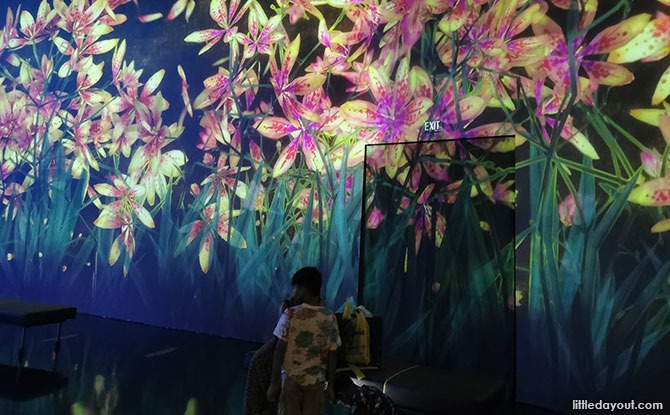 This floral artpiece in the segment is my personal favourite. The mesmerising piece is titled Proliferating Immense Life showing how flowers bud, grow, blossom, wither and fade away. The cycle repeats and is actually rendered by a program in real time. Did you know depending on month of visit, you will see different flowers in different colours?

Future World caters to young audiences in many of the interactive elements. At the City of Garden segment, there is much to occupy the kids at three main sections. 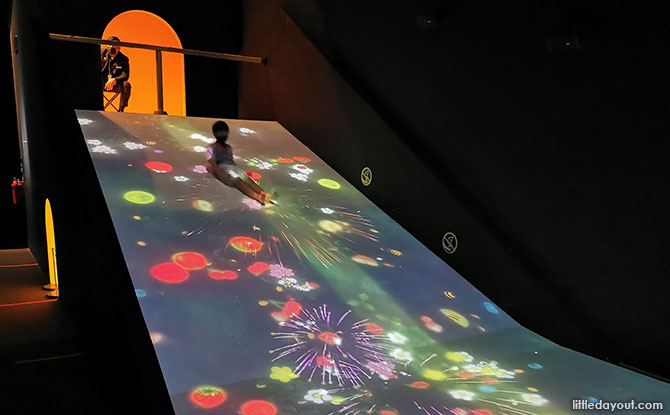 The highlight of the segment for the children would be the Slide through the Fruit Field! This magical slide grows fruit, children represent the sunlight that transfers the energy with the balls, when balls collide with the fruit – it grows! The light blue ball represents water and it helps the seeds to sprout, bud and blossom. The yellow ball is the honeybee ball which helps pollinate the flowers to become fruit. When a fruit is hit by a ball, new seeds are sown. 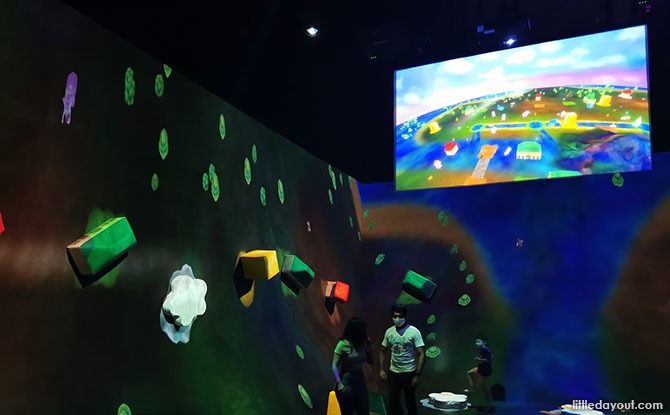 The Inverted Globe room gives kids the opportunity to build their own city with giant connecting blocks. Kids can position the blocks of houses, stations to develop transport systems and build waterways with pond blocks to prevent flooding. 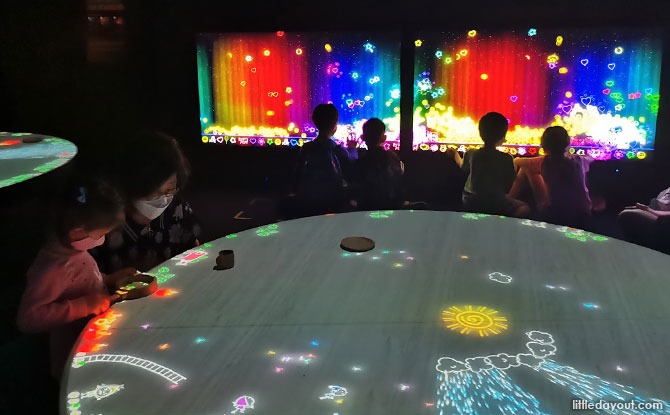 Sketch Piston and A Table Where Little People Live are in the room just across the Inverted Globe. At Sketch Piston, Children can compose music by placing stamps onto the canvas. When balls hit the stamps, a note plays and music is made! The three laws of mechanics are at work here, the law of inertia, the law of motion as well as the law of action and reaction. 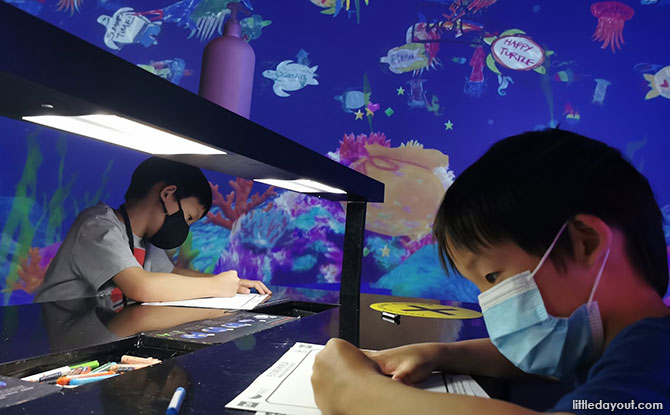 If there is a segment your child might be spending the most time at, it could be the Sketch Aquarium. Colour a sea creature like a jellyfish, shark, squid, turtle, seahorse, coral and watch the creation come to life in the aquarium. You can also interact with the marine creatures by touching them and watching them swim away, or touch the food bag to feed the fish. 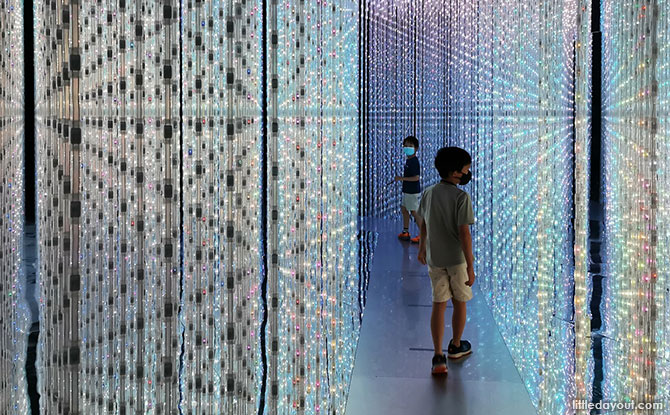 The most instagrammable exhibit of Future World, Crystal Universe, sits in the Space sector. Space has long been studied and explored to advanced mankind. This part of Future World invites visitors to see the beauty and scale of the universe.

Crystal Universe does this perfectly with LED light points. The light points are used to create three dimensional objects with the pointillism technique. It almost felt like we were surrounded by stars, with the lights changing colours as the people around it move.

Even though my children have experienced Future World a couple of times, I was surprised at how much they loved it and spent close to 2.5 hours just creating, laughing, playing and watching the motion of the visuals.

The exhibition was captivating, even for the adults and we would love to be back again, especially on a rainy day.

For more information on the Future World exhibition, visit this site.

Future World is a ticketed exhibition at ArtScience Museum, 6 Bayfront Avenue and accessible daily 10 am to 7 pm. Purchase your tickets here.

Achieve From the Past – Previous Sections of Future World: Where Art Meets Science

Sanctuary: The Way Of Birds (Replaced by Exploring New Frontiers) 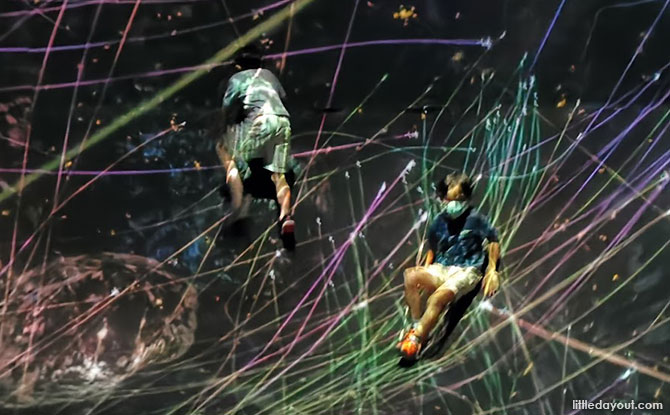 The Way Of Birds was part of the Sanctuary segment. It was a “quieter haven” compared to the rest of to exhibition and invites one to reflect and contemplate.

The Way of Birds was an enjoyable exhibit that was immersive and seemed to transport one to a different world. Watch the flock of birds that avoid people in the space as they fly freely, their trails leave lines and patterns, with beautiful colours. Get sucked into the artwork as you watch and feel your world transform into a wonderful mess.

Park was a space that encouraged physical movement, have fun and reflect on play as part of human activity. 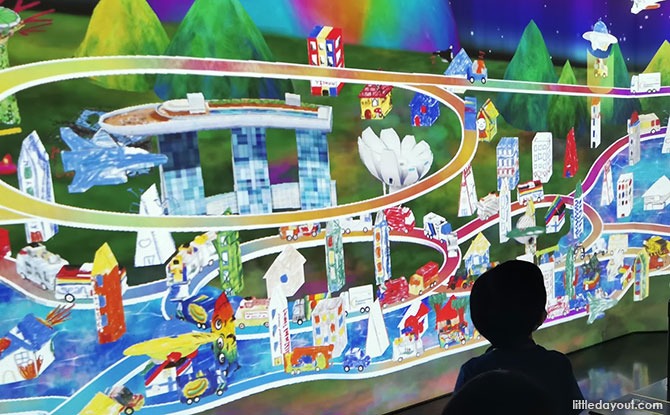 Sketch Town was the town version of Sketch Aquarium. Kids colour buildings, houses, cars, planes, UFOs for the Smart Town of the future. Observe how the town features renewable energy sources: hydroelectric, solar, wind, biomass and see how your touch can prompt the town to grow and generate power. The 2C drawings become 3D models on screen and it is always an exciting affair watching the town come to life with every new addition.

Design your own Hopscotch at Create! Hopscotch for Geniuses. Put circles, triangles, squares to form the course, you can determine the level of difficulty and different sound effects will play as participants hop through the uniquely designed course. 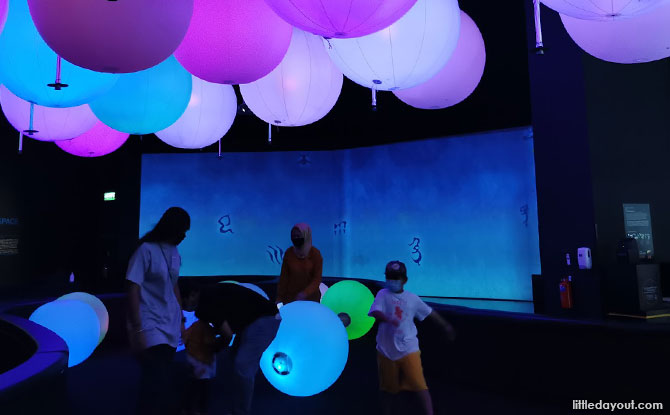 A play area that will certainly drew attention was the Light Ball Orchestra; there were two ball pits, one larger one for older children and one for the toddlers. Rolling a light-ball changes both its colour and sound. When combined, the light-balls form an orchestra together with the overhead ones! The entire space transforms into a cacophony of music and colours. 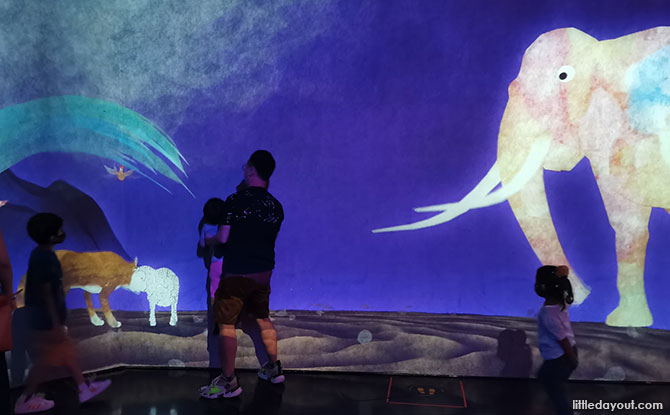 More action could be found aat When Gods were Everywhere. This interactive art installation paid tribute to the origin of Chinese characters and tells of how fortune telling in the form of pictographs was the beginning or Oracle bone script. As the symbols on the screen are touched, they evolved into images they represent and tell a story.