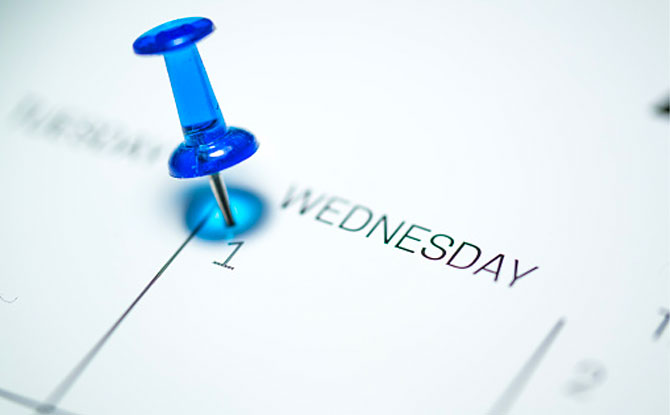 Happy Week Middle! As most people know, Wednesday is the middle of the work week. It’s the day that we are all just trying to get through so we can enjoy our weekends. However, there is more to Wednesday than just being a day in the middle of the week. If you are looking for a midweek boost can enjoy some of these hilarious Wednesday jokes! 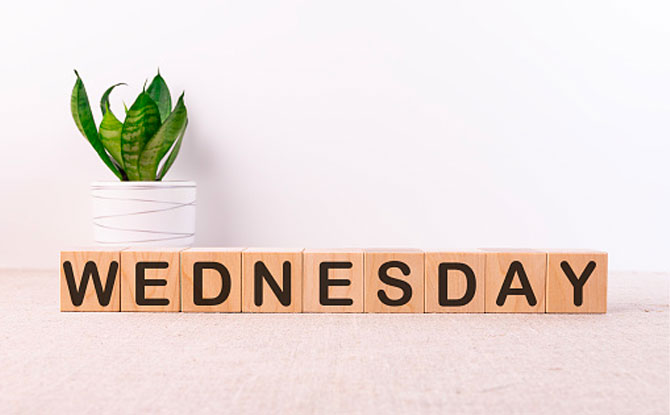 1. Why was the man happy about Ash Wednesday?
Because he wished to give up his work for lent.

2. What is hump day like for the working parents?
A Wednesday that never leaves them alone with never-ending work.

3. Why did the employee get a camel in the office building?
Because the boss said, ‘Bring in the hump day’.

4. What did the student say when they had too much homework on Wednesday?
This is the Monday-est Wednesday ever!

5. Why are Sundays stronger than Wednesdays?
Because Wednesday is a week day.

6. Why did the woman cry on a Wednesday evening?
Because she thought it was whine Wednesday.

8. Why did the man call it a weekend on a Wednesday?
Because he said, “After two days it will be Friday, which makes tomorrow a pre-Friday, hence, it is a weekend on Wednesday”.

9. Why don’t they have Drivers Ed on Wednesday in the Middle East?
It wears out the camel.

10. How does Adele greet Wednesday from a Sunday?
“Hello from the other side of the week!”

11. Me and my childhood crush are getting married next week.
Me on Wednesday and she on Saturday.

12. Why did the man have an un-inviting face in office?
Because it was his Monday-Tuesday-Wednesday face.

More Funny Wednesday Jokes and Puns to Laugh At Mid-Week 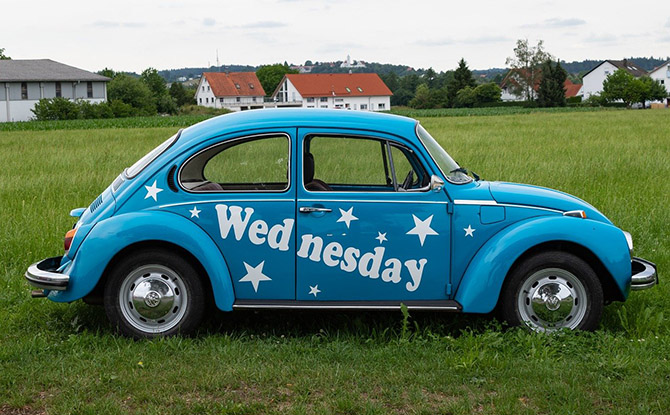 Wednesday gets its name from the old English word for “Woden’s day.” Woden was the chief god in Anglo-Saxon mythology and he was associated with wisdom, magic, and war. In Norse mythology, Odin was also the chief god and he was known for his wisdom as well. Thus, Wednesday is named after two powerful gods who were known for their wisdom.

13. What did the tree say to Wednesday?
Please, leaf me alone.

14. How did the man react when his boss exclaimed, “What a week full of work, right?”
He looked in disbelief saying, “It’s only Wednesday”.

15. Why are Superman’s powers useless on Wednesday evenings?
Because he goes to his weekly Bitcoin meeting and it’s his crypto-night.

16. Wednesday and Thursday were named after the Norse Gods Odin and Thor…
And if you really enjoy facts about Norse Gods then today is your Loki-day!

17. What is it that the Wednesdays’ dream to be?
They only dream and wish of becoming Thursdays.

19. What are Wednesdays like?
They are just Mondays in the mid-week.

20. What kind of bread do you eat on Wednesday?
Hump-ernickel.

21. Why do Wednesdays feel unhappy?
Because they are as close to the weekend as they are to Mondays.

22. What do you call a camel with no hump on a Wednesday?
Hum-phrey!

23. What do you call Wednesdays at the gym for pirates?
Peg day

24. Why was Saturday stronger than Wednesday?
Because Wednesday is a weekday.

25. How does Yoda get through Wednesday?
By saying, “Half over the week is now!”

26. How do people motivate themselves on Wednesdays?
They say, “Only two more days for the weekend. Keep it up!”.

28. What day creates the most alternative energy?
– Winds-Day.

29. How do you know that weddings on a Wednesday are sad?
When you see the cake is in tiers too.

30. How do Ash Wednesdays inspire New Years’?
They help you to stay strong and give up on new year resolutions as a sacrifice.

31. What is it that will help get over the hump?
A smile with an extra cup of coffee!

32. What is the best day to eat Camel meat?
Wednesday

33. How do all the animals react to Hump day?
They try to avoid the camel all day long.

34. If Johnny buys seventeen doughnuts every Monday and eats twelve of them each Wednesday, what is Johnny left with at the end of the year?
Diabetes

Hilarious Wednesday Jokes That Will Bump Your Hump Day 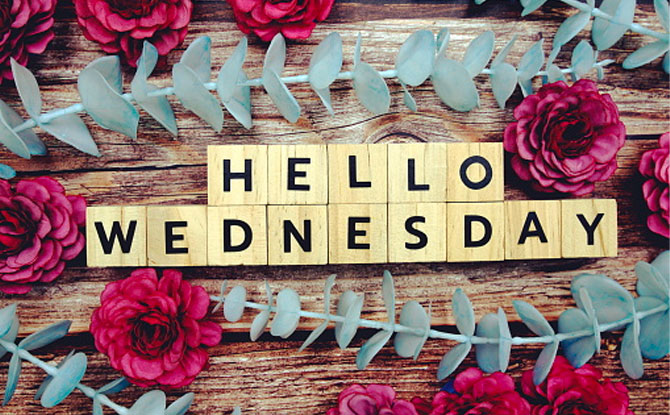 Isn’t it funny how some people refer to Wednesday as a hump day? This weekday is one that indicates that we are already halfway through the week. Here are some funny punny Wednesday jokes that everyone can enjoy.

35. A man named Jim goes to a religious centre and the leader says “What’s wrong my son?”
Jim says “I want you to pray for my hearing”.
The leader puts his hands on Jim’s ears and prays hard for ten minutes.
“So how is your hearing?” asks the vicar.
“I don’t know”, says Jim, “it isn’t until next Wednesday”.

36. A man walks into a bar with a pork pie on his head.
The barman asks, “Why are you wearing a pork pie on your head?”
The man replies, “It’s a family tradition. We always wear pork pies on our heads on Tuesday.”
The barman remarks, “But it’s Wednesday.”
Sheepishly, the man says, “Man, I must look like a real fool.”

37. I joined a Karate class and told the Sensei I wanted to learn how to do roundhouse kicks. He asked me how flexible I was and I replied I can’t train on Wednesdays and Fridays.

38. A Husband came home late at night from the office one day and realised he forgot his Wife’s birthday…
“How would you feel if you don’t see me for the next few days?” His wife said
He couldn’t believe his luck. He replied at once. “Wowww…..That would be great!”
Monday passed and he didn’t see her….
Tuesday he didn’t see her…
and Wednesday passed too…
On Thursday the swelling was better as he caught a glimpse of her from the corner of his left eye.

39. My mate has two tickets for the England vs Croatia game on Wednesday
He didn’t realise that it was going to be on the same day as his wedding, so he can’t go. If you’re interested and want to go instead of him, it’s at St. Andrew’s Church in Cambridge and her name is Sarah

40. Wife: Don’t forget to pick up the kids from school.
Me: It’s Saturday, they’re both upstairs.
Wife: It’s Wednesday and we’ve three kids.

42. An intern asked his senior: “How do you make up for coming late to work on a Wednesday?” The senior answered: “By leaving early, perhaps?”

43. Mother: ‘Why are you home from school so early?’
Son: ‘I was the only one who could answer a question.’
Mother: ‘Oh, really? What was the question?’
Son: ‘Who threw the blackboard duster at the teacher?’

45. My new girlfriend works as a bin lady…Trouble is, I can’t remember if I’m supposed to take her out Wednesday or Thursday.

46. A man goes into a fish n chip shop with a salmon under his arm and asks, ‘Do you sell fish cakes here?’ ‘No,’ came the reply. ‘Shame, it’s his birthday.’

47. Boss: This is the third time you’ve been late for work this week. Do you know what that means?
Me: That it’s only Wednesday

48. Monday, Tuesday, Wednesday, Thursday, Friday, Saturday, and Sunday. Ahh, those were the days.

50. People always told my dad that his pride would be the death of him, and sure enough, he was eaten by his favourite lion just last Wednesday.

51. I was reading my emails…
The other day I was reading my emails and there was one from my boss, it said; “Ms. Morgan I regret to inform you that although I thought this company could tolerate your ADD, I’m afraid you’re just not productive enough. You may turn up Wednesday to collect your things. I sincerely hope you will be OK.”
– And I thought to myself, doesn’t OK look like a sideways person?

52. Ash Wednesday was yesterday so my family is going to be eating a lot more legumes. Mostly lentils.

54. On Ash Wednesday I will be giving up spreadsheets for 40 days and 40 nights.
It’s going to be completely Excel Lent.

55. ATTENTION: This afternoon I will attempt to travel back in time and change history. You’ll know I’ve succeeded if Germany loses world war II and Wednesday comes after Tuesday.