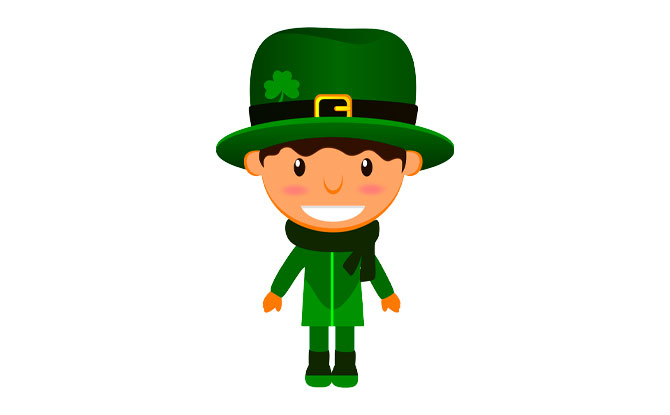 St. Patrick’s Day is a fun celebration of Irish culture celebrated worldwide by those with Irish heritage. It is a widely adored holiday and there are tons of jokes surrounding this celebratory event. Here are some jokes that you can share during St. Patrick’s Day.

2. Why did the leprechaun climb over the rainbow?
To get to the other side!

3. What kind of music do leprechauns love?
Sham-rock.

4. Why shouldn’t you press a four-leaf clover?
Because you don’t want to press your luck!

6. Do people get jealous of the Irish?
Yes, they’re green with envy!

7. Why do people wear shamrocks on St. Patrick’s Day?
Regular rocks are too heavy.

8. What do ghosts drink on St. Patrick’s Day?
BOOOOs

9. What should you say to someone running a marathon on St Patrick’s day?
Irish, you luck!

10. Where can you always find a shamrock?
In the dictionary.

11. How can you spot a jealous Shamrock?
It will be GREEN with envy.

12What did the naughty leprechaun get for St Patrick’s day?
A pot of coal!

13. What do you call a leprechaun’s vacation home on St Patrick’s day?
A lepre-condo

14. What do you call a spider that you find on St Patrick’s day?
Paddy long legs

16. Why shouldn’t you borrow money from a leprechaun?
Because they’re always a little short.

17. Why do leprechauns make great secretaries?
They’re good at shorthand.

18. What do you get when you cross poison ivy with a four-leaf clover?
A rash of good luck.

19. How is a good friend like a four-leaf clover?
They’re hard to find!

20. What do you call a fake Irish diamond?
A shamrock

21. Who is St. Patrick’s favourite superhero?
The Green Lantern

22. What type of sandwiches should they serve on St. Patrick’s Day?
Paddy melts!

23. What’s the best position for leprechauns to play on a baseball team?Shortstop

24. How can you tell if a leprechaun likes your joke?
When he’s Dublin over with laughter!

25. What do you get when two leprechauns have a conversation?
A lot of small talk

26. How did the leprechaun win the race?
He took a shortcut.

27. What do you call a leprechaun who gets sent to jail?
A lepre-con!

28. Why cant Irish golfers ever end a game on St Patrick’s day?
They refuse to leave the green.

29. What did one Irish ghost say to the other?
Top O’ the mooooaning to you

31. How does a leprechaun work out?
By bench pressing his luck

32. Why are leprechauns so concerned about global warming?
They’re really into green living.

33. What does it mean if you find a horseshoe on the floor on St Patrick’s day!
Some horse lost its shoe.

34. When does a leprechaun cross the street?
When it turns green!

35. What do you call leprechauns who collect aluminium cans, used newspapers and plastic bottles?
Wee-Cyclers

36. What do you call an Irish spider?
Paddy long legs

37. Why did the leprechaun turn down a bowl of soup on St Patrick’s day?
Because he already had a pot of gold!

38. How did the Irish Jig get started?
Too much water to drink and not enough restrooms!

39. Where would you find a leprechaun baseball team?
In little league.

40. What’s the difference between Irish wisdom and Irish luck?
One is clever. The other is clover.

42. What would St. Patrick order to drink at a Chinese restaurant?
Green tea

43. What do Irishmen say when you tell them Bono is your favourite singer?
You too?

44. Why did St. Patrick drive all the snakes out of Ireland?
It was too far to walk

45. When does a leprechaun cross the street?
When it turns green

46. What do you call a leprechaun with a sore throat?
A streprechaun

47. What is Dwayne Johnson’s name on St Patrick’s Day?
The Sham-Rock.

48. What’s long and green and only shows up once a year?
The St. Patrick’s Day parade.

49. What type of bow cannot be tied?
A rainbow

50. Why did the leprechaun go outside?
To sit on his paddy-o

51. What would you get if you crossed Christmas with St. Patrick’s Day?
St. O’Claus

52. What did the leprechaun say when the video game ended?
Game clover

53. How should you buy drinks on St. Patrick’s Day?
With soda bread.

54. What instrument does a showoff play on St. Patrick’s Day?
Brag-pipes

55. What do you call a leprechaun prank?
A saint pat-trick.

56. Why do leprechauns dislike leftovers?
They prefer left-clovers

57. Why do leprechauns have pots o’gold?
They like to “go” first-class

58. Why did the leprechaun stand on the potato?
To keep from falling into the stew

59. What does a leprechaun call a man wearing green?
A green giant

60. What does Ireland have more of than any other country?
Irishmen

61. What job did the leprechaun have at the restaurant?
He was the short-order cook

62. How did the leprechaun win the race?
He took a shortcut

63. What did the leprechaun put in the vending machine?
A lepre-coin

64. Why are so many leprechauns gardeners?
Because they have green thumbs

65. What do you call a bad Irish dance?
A jig mistake

66. How old are leprechauns?
So old that they can remember when rainbows were black and white

67. Why are leprechauns hard to get along with?
They are short-tempered

68. What do leprechauns barbecue on St. Patrick’s Day?
Short ribs

69. What did the baby leprechaun find at the end of the rainbow?
A potty gold

70. What type of spells do Irish witches cast?
Lucky charms

71. Why do leprechauns prefer dollar bills to coins?
Because they’re green

72. What’s the name of a popular Irish dance move?
The shamrock shake

73. What did the Irish potato say to his sweetheart?
I only have eyes for you

74. Why does the River Shannon have so much money in it?
Because it has two banks 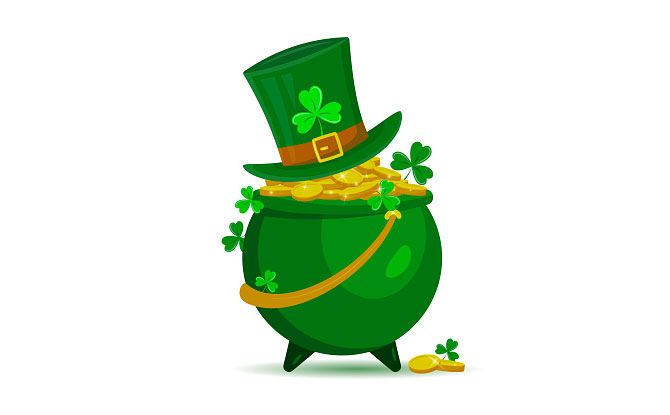 Channel your inner leprechaun by telling a bunch of funny St. Patrick’s Day jokes that will have everyone around you Dublin over with laughter throughout the day. It’s sure to be a hit at any gathering with family and friends.

75. An American lawyer asked, “Paddy, why is it that whenever you ask an Irishman a question, he answers with another question? “Who told you that?” asked Paddy.

76. On St Patrick’s day late at night, Paddy was in no shape to drive, so he sensibly left his van in the car park and walked home. As he was wobbling along, he was stopped by a policeman. ‘What are you doing out here at four o’clock in the morning?’ asked the police officer. ‘I’m on my way to a lecture,’ answered Paddy.‘And who on earth, in their right mind, is going to give a lecture at this time on New Year’s day?’ enquired the constable sarcastically.
‘My wife,’ slurred Paddy grimly.

77. Paddy walked into a bar on St. Patrick’s Day and started ordering martini after martini. He removed the olives and put them in a jar with each drink. When the jar was filled with olives, and he’d finished all the drinks, Paddy started to leave.
As he did so, a curious customer asked him, “Excuse me, but what was that all about?”
“Nothing really,” replied Paddy, “My wife just sent me out for a jar of olives.”

78. The American tourist passed by a farm and saw a beautiful horse. Hoping to buy the animal, he said to the farmer: “I think your horse looks pretty good, so I’ll give you 700 Euro for him.” “He doesn’t look so good, and he’s not for sale,” the farmer said. The tourist insisted, “I think he looks just fine, and I’ll up the price to 1,200 Euro. “He doesn’t look so good,” the farmer said, “but if you want him that much, he’s yours.” The next day the tourist came back in a rage. He went up to the farmer and screamed, “You sold me a blind horse. You cheated me!” The farmer calmly replied, “Now, how could that be. I told you he didn’t look so good, didn’t I?” 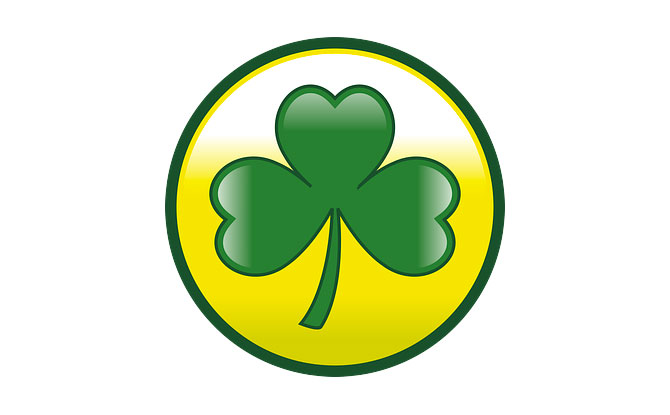 80. Knock, knock.
Who’s there?
Ireland.
Ireland you money if you promise to pay me back.

81. Knock, knock.
Who’s there? Erin.
Erin who?
Erin so fast, but I couldn’t catch the leprechaun!

82. Knock, knock.
Who’s there?
Clover.
Clover who?
Clover here and I’ll tell you.

83. Knock, knock.
Who’s there?
Saint.
Saint who?
Saint no time for questions; open the door!

84. Knock, knock!
Who’s there?
Pat.
Pat who?
Pat the dust off your shoes because we are going to the St. Patrick’s Day party!

86. Knock-knock!
Who’s there?
Warren.
Warren who?
Warren anything green for St. Patrick’s Day?

88. Knock-knock!
Who’s there?
Irish.
Irish who?
Irish you a happy St. Patrick’s Day!