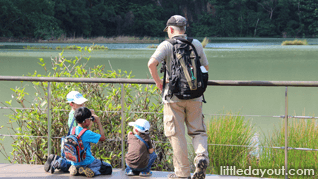 It was a beautiful morning and the birds were merrily chirping in agreement. Three NParks officers had banded together with a desire to help interested members of the public appreciate the diverse and abundant birdlife through a guided two-hour session.

Held on Earth Day itself (22 April 2013), this birdwatching session was all the more timely and meaningful. Having loved birds from afar for far too long and with no clue where and how to begin, I found myself responding to this call of nature.

Birdwatching in Singapore: Birds of a Feather Flock Together

Bright and early at about 7.30 am, I discovered a group of about 20 other bird lovers already gathered at Dairy Farm Nature Park’s Car Park A (near Salvation Army), all ready to set foot towards Singapore Quarry Wetland, just west of Bukit Timah Nature Reserve. I was particularly delighted to find a set of parents in our midst, together with their two sons aged four and six. The boys are homeschooled and this was their outdoor classroom for the day! Their dad had made time for this little day out despite having to report to work later, making it a special Earth Day for the entire family indeed.

Both boys came prepared with their new, black and bright yellow, kids-sized binoculars purchased from the soon-to-be-closed National Geographic Store at VivoCity. I didn’t have one and was pleasantly surprised and grateful when one NParks staff lent me one of the six extra binoculars she had thoughtfully brought along.

Following a quick briefing, we were on our way. After just a few steps, we realised how quickly we had left behind the snarl of morning traffic and entered into a completely different world of tranquillity. Sunlight shone through the trees and leaves, beckoning us to follow its lead. 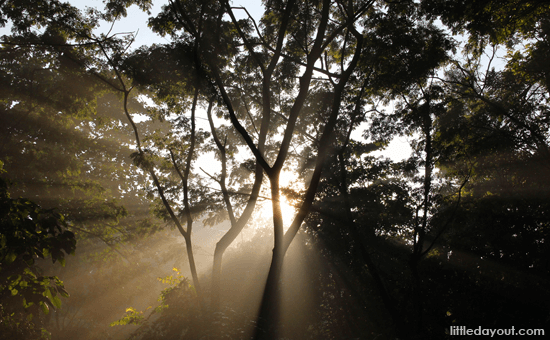 Here are three lessons and some tips that dawned upon me at my first birdwatching session:

“Birdwatching is very simple,” began our guide. “The first thing you must do is to use your eyes.”

We all chuckled at the simplicity of his first pronouncement as we entered the park. “Obviously!” we thought. But it was not as simple as it seemed, especially for us first-timers.

“And of course, use your ears. Stop, stay quiet and listen. Listening is an important skill we can all do more with it in life,” he added.

Soon after, he told us to hear where the bird was calling from, to look at the trees, locate the bird with our eyes, before pointing our binoculars to see it.

That took quite a bit of getting used to. “Where? Where? Where?” asked the kids, voicing out the very question some of us adults were yearning to ask. 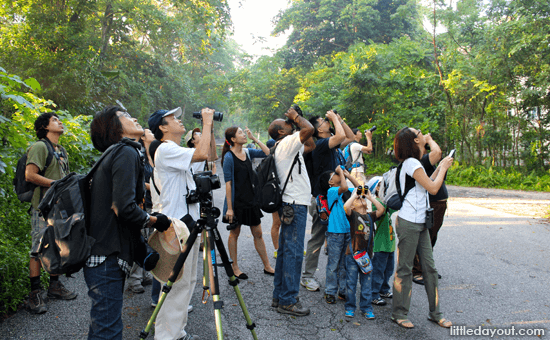 The birds were perched high up on the trees. After some “ten-o-clock, second branch from the top” type of directions, I was thrilled to see a black-naped oriole up-close with the help of my binoculars. I also finally learnt the name of the Asian gosly starling, a red-eyed bird with a dark green-sheen that I often see near my home. 2. The Early Bird Catches the Worm

There is truth to the idiom “the early bird catches the worm.” According to our experts, the best time to birdwatch is in the early morning, just after the first rays of light touches the earth, at about 6.45 am. This is the time when the birds are out for their morning breakfast.

The flowerpeckers, with a wingspan of less than 10 cm, were exceptionally dainty and delightful to watch. If the guide had not pointed out that it was a bird, I would have thought it was a butterfly up high in the sky. 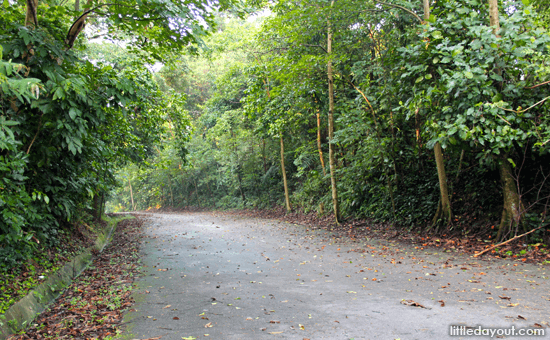 It was an easy path and that allowed us to fully concentrate on our surroundings. As we walked further into the park, we learnt to tune our ears to the different calls of the birds that interrupted the drone of the cicadas. We heard more birds but saw less of them as the morning wore on.

Our guide highlighted to us interesting facts like how the racquet tail drongo (named because its tail resembles a badminton racquet) is able to mimic the sounds other birds. He also taught us to make a “ch chiew” sound next to some bushes. While we didn’t see the striped tit babler, it responded likewise to our bird calls!

When the day warms up, the birds return to roost. Hence, the next best time to birdwatch would be in the evenings from about 5.00 pm to 7.00 pm. 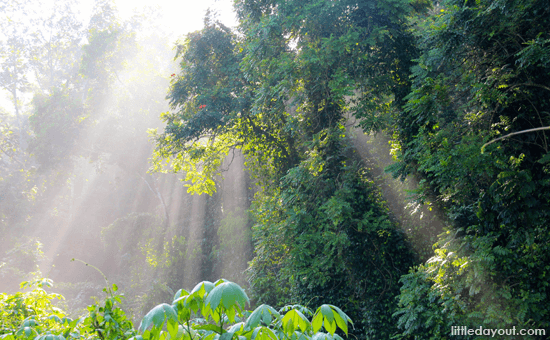 3. Beauty of the World of Birds

Through one of the few telescopes that NParks had brought along, we stopped along the way for some close-ups. With their keen eyes, the kids had fun describing the many colours on the different parts of the birds.

One six-year-old boy amused us all when he showed signs of being a budding ornithologist by rattling off the names and colours of the birds he had seen and learnt of thus far. 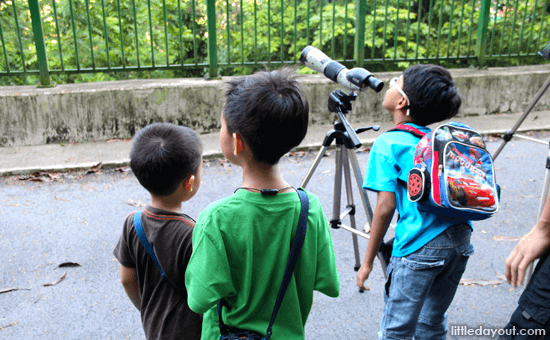 I was already happy to see the beautiful Albizia trees with its glorious white blooms and how freely the birds flew, but when I peered into the scope and saw the long-tailed parakeet eye to eye, I was spellbound. And when the white-bellied sea eagle soared across and claimed the skies, it made my day. There’s something awesome about nature and a day out like this does wonders for our souls. 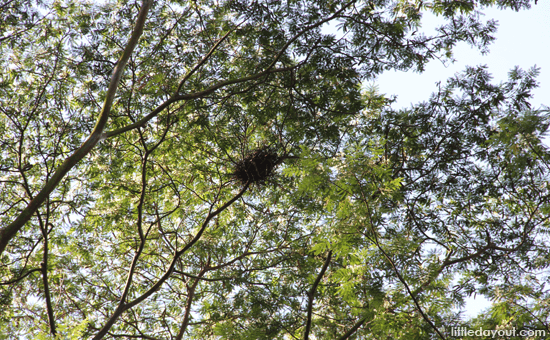 The amazing fact is that Singapore has many species of birds and we can stop to admire the birds even in our own housing estates. Yes, they may be the more common mynahs and sparrows, but the guide urged us to train our eyes to spot even migrant birds from the Arctic.

For more serious spots for birdwatching, the Wallace Trail and Hindhede hold many similar species due to its proximity to Singapore Quarry. Bishan-Ang Mo Kio Park with its introduced stream has been an inviting spot for the birds. Other good places would be Punggol Waterway and Sungei Buloh in the mornings for its migratory shorebirds. See the Nature Society (Singapore)’s website for more birdwatching hotspots.

The highlight of the morning was reaching the Singapore Quarry after a short 800-metre walk. Quarrying activities had continued there until the late 1980s. Today, many birds have returned to this wetland habitat. The huge granite boulder that stood before us was a sight to behold and the pond was wide and some 8 feet deep at certain parts. Within the short two hours in that one morning, we had caught sight of or heard at least 28 species of birds. The last bird I saw at the quarry land was this brilliant kingfisher that told me that I had to be back for more! Tips That Are Not Strictly for the Birds

If you’re birdwatching for the first time, these tips will come in useful: 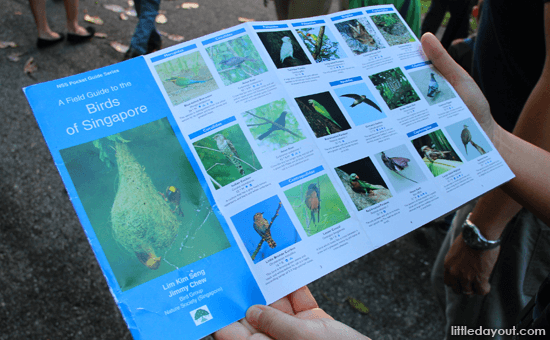 Birdwatching is a great activity for young and old. You can pace your walks, pause to watch and make many new discoveries together. Birding is also a great way to teach our children how to look and listen, and capture what they have seen. Happy bird watching!