Home Play Playgrounds Old-Style Merry-Go-Rounds In Singapore: All Round Fun

Does anyone still remember the old merry-go-rounds that could be found in Singapore? The large and heavy steel play equipment that you would have to give a big heave before hopping on board once the momentum picks up?

In the past, there were a couple of these relics still around. There was one at Begonia Road and another at Tiong Bahru Park.

Sadly, these original, old-style merry-go-rounds have all been replaced.

Nowadays, you can find smaller versions of these old-style merry-go-round in Singapore. These are characterised by grab bars which look like flying buttresses  joining a central spindle. Presumably, these merry-go-rounds have been updated to be safer compared to their old-school predecessors. Yan Kit Playfields at Tanjong Pagar has a little silvery merry-go-round with three bays for kids to stand on once the spinning begins. It can be found alongside the rest of the play equipment at the park. 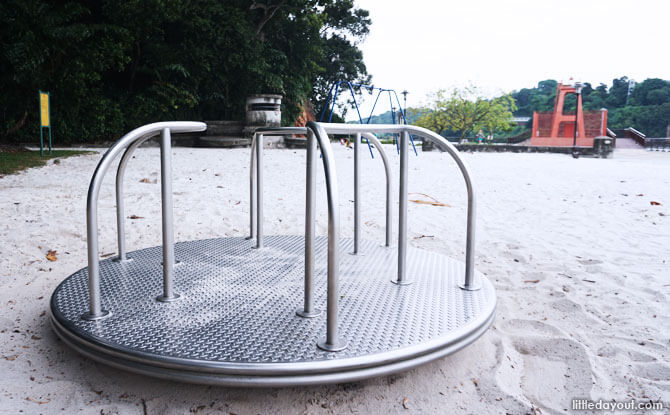 Located in front of the machine gun pillbox at Labrador Nature Reserve is a little playground with some old school vibes. This is in part due to the merry go round where kids can spin around and around. Even though it doesn’t have a central spindle, we’re going to include it into the list. A classic-looking, yellow merry go round can be found at Watten Heights Playground. It’s part of the park’s fun play equipment which includes a zipline. Firefly Park in Clementi has a little mini version of an old-school style merry go around. It sits beside the large purple play structure in the neighbourhood park. This playground has a mix of both old-school play equipment such as a blue and red merry-go-round, swings and a sandpit, as well as more “modern” play areas such as mini rock climbing wall. 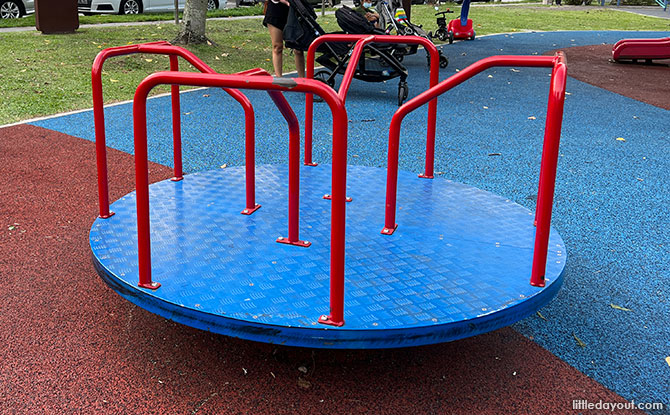 There is a mini merry go round at this eastside park at Opera Estate. Find out more about Bangsawan Park.