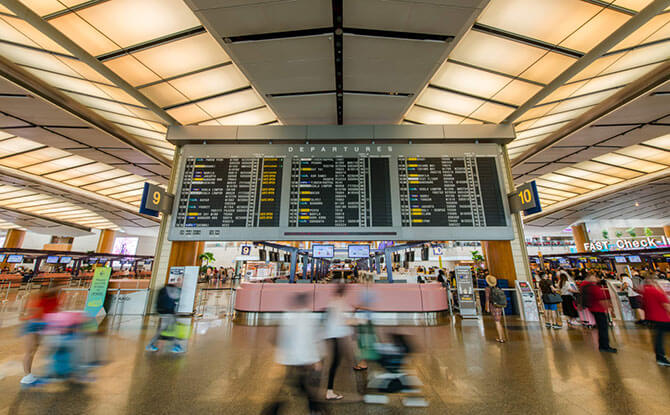 With the renovation of Changi Airport’s Terminal 2, the iconic Flight Information Flip Boards have been retired. Thankfully, instead of being swept away to the dust heap of history, it was jointly announced by Changi Airport Group and National Heritage Board that one of two the analogue flight information boards will be kept away (accessioning is the technical term) in Singapore’s National Collection.

Changi Airport’s Flight Information Flip Boards belong to an era of analogue information. They were put up before the Internet and digital signboards existed. Each flip board is made up of one large display board, 48 panels of the back board, more than 50 metal casings and 2,052 capsules of individual letters and numbers.

That’s a lot of moving parts!

2. Longer than a Container

To makes sure that flight information is easily visible, the board has to be big. The size of of the pieced together flip board is 4.5 metres in height by 15 metres in length by 0.3 metres in width. That’s longer than a shipping container that we usually see plying around the roads.

With so many different parts, the tiles can be controlled to display more than just flight information. In fact, on 15 August 2016, the flip board was used by Changi Airport to welcome Joseph Schooling home after his record-breaking Olympic gold medal win at the 2016 Rio de Janeiro Olympic Games.

“We are heartened that the flip boards have provided many wonderful memories to Changi Airport’s passengers and visitors over the decades, as they continue to capture the romance of travel in today’s highly digital age. The flip boards are certainly part of Changi Airport’s history. Hence, we will also re-use the last remaining flip board, to be retired in about two years’ time, in a different part of the airport as a display piece to be enjoyed by all who visit,” said Mr Ang Siew Min, Senior Vice President, Development Operations, Changi Airport Group.

READ: Changi Experience Studio – An Interactive Look at What Makes the Airport Tick