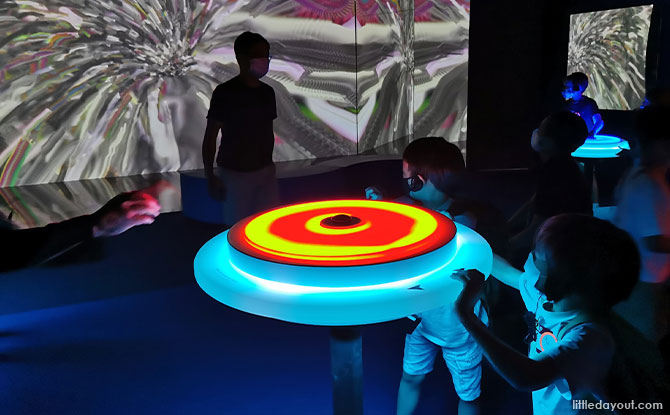 ArtScience Museum’s latest exhibition Virtual Realms is not just for gamers, it is for everyone who loves fun, collaboration and immersive experiences. We had a chance to experience a guided tour of the Virtual Realms exhibition during a recent stay at Marina Bay Sands in September 2021 and found it was an amazing exhibition.

Given how the world has turned its attention onto the digital realm, games, in particular, have caught the attention of many. Not just for leisure but in professional areas, game developers and artists are changing the world one game at a time. 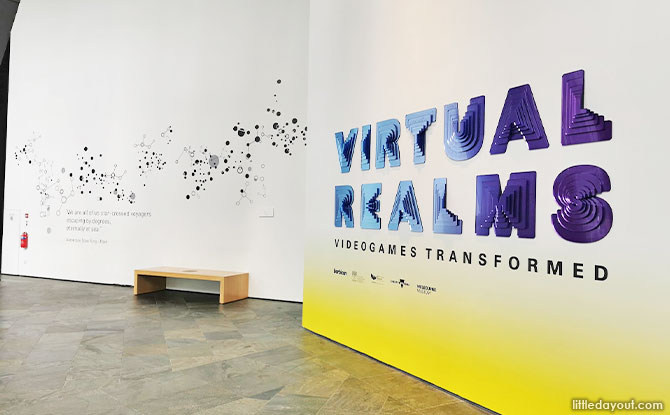 Virtual Realms exhibition holds its global premium at ArtScience Museum and was made possible by a collaboration between top video game developers and media design studios. You may recognise KOJIMA Productions, Enhance, thatgamecompany, Tequila Works, Media Molecule and David O Reilly as names in the gaming scene.

At first, I was slightly apprehensive about the theme. As a parent, I witness first-hand how video games suck children into the world of digital gratification. I certainly didn’t need more resources encouraging the habit or more accurately, an addiction. However, the facilitator emphasised a much less talked about aspect of video gaming which was how everything came together behind the scenes.

The element of collaboration was brought out very strongly in the exhibition and through presenting the “hows” of video game creation, I was mesmerised by how techniques were used in presenting game design as a form of art.

At each of the galleries, our guided tour facilitator explained more about the background of the creators.

Each gallery had a different focus: Synethesia, Unity, Connection, Play, Narrative and Everything. But they all invited participants to work together to tell stories, control the visuals, co-creating music and images. 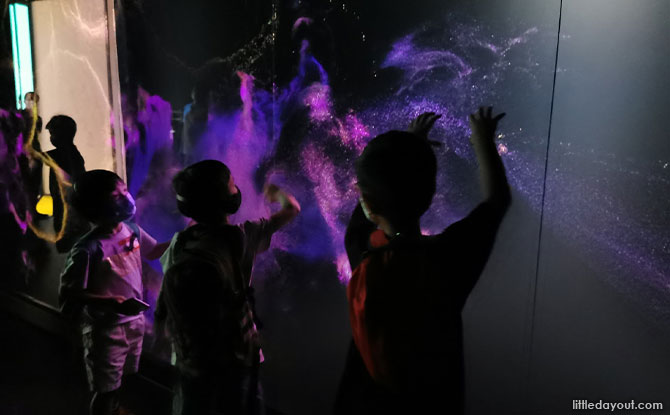 Connection was not just about making patterns on the wall through connections, it also brought out themes like contrast as there were two rooms with different backgrounds. It also emphasised different perspectives – one micro and other macro. 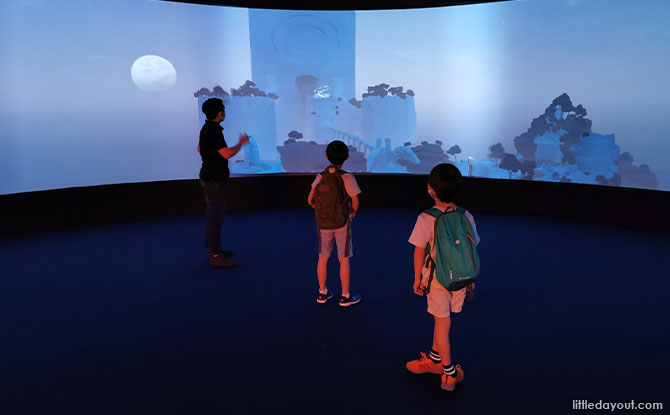 Narrative required teamwork to step into the spotlights to trigger changes on the screen. The story unfolds as the spotlight sense motion. This gallery may be a little creepy for the younger ones due to “faceless” characters but very interesting to watch.

Everything gives participants the chance to be behind the controls of game creators – by adjusting three different knobs. Each controls a different aspect of the kaleidoscope formations. The visuals are also accompanied by a synchronised soundtrack from the London Symphony Orchestra. Indeed it was a mesmerising, psychedelic kaleidoscope of colours and strange objects. 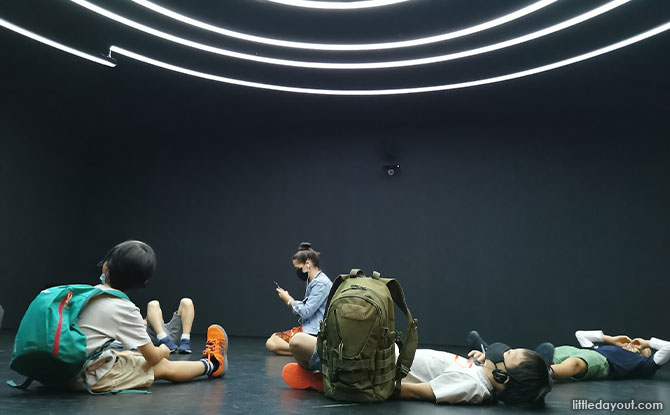 Unity presented a circular light sculpture that would light up with everyone working together to “play” the instrument. Again it reinforces the concept of different players in video games working together and at times uniting with a common goal. The experience was calming, soothing, almost to the effect of being enchanted with a mysterious light source from above. 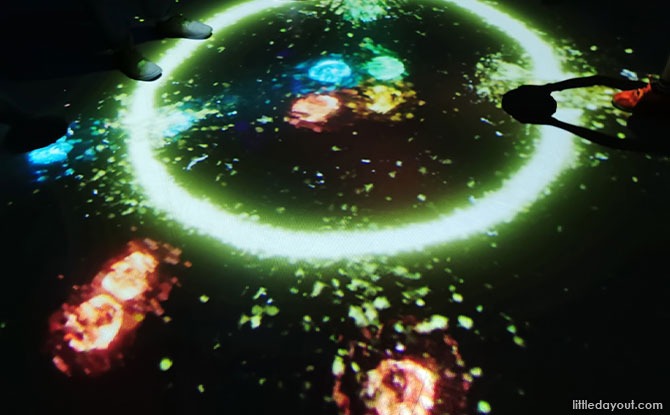 We had a chance to peek into Synethesia that allows participants to take part by moving objects with the help of light, sound and haptic technology. This is a must-do, in my opinion, to experience the various effects of types of interactions between objects. It also presents the blend of art and science in a clear manner that is easier to understand for children. 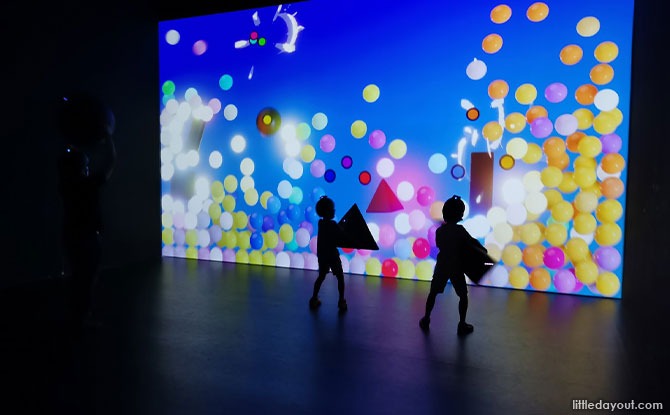 Play was a chance to put on tracking helmets, hold oversized geometric shapes and play a game! This was like stepping into a video game in life-sized form. 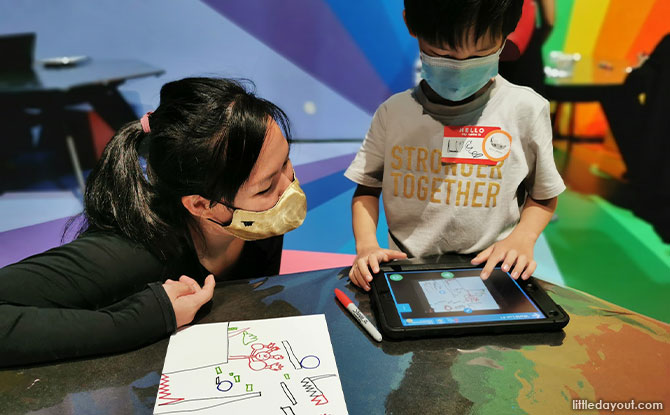 During our stay, the kids also had the opportunity to learn how games are created at a  special The Mini Holiday Camp: Ready, Get Set, Play workshop where they got to design a game with 2D drawings. 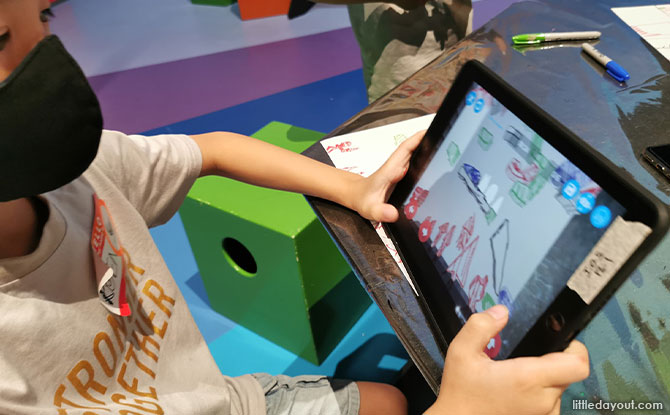 First, participants took part in an ice-breaker to show how collaboration in design works.

Then they were asked to draw a game on paper – an obstacle course using different coloured markers to mean different things. Black for fixed structures, blue for movable objects that must be destroyed, red for lethal things and surfaces and green for structures that can be for bouncing off.

This was a good time of practising and then going back to the drawing board again after scanning in and testing out the drawing. It was a quick peek into how video games are designed in reality. The constant iterating and editing put the child in the role of the creator, who had to keep improving on it. 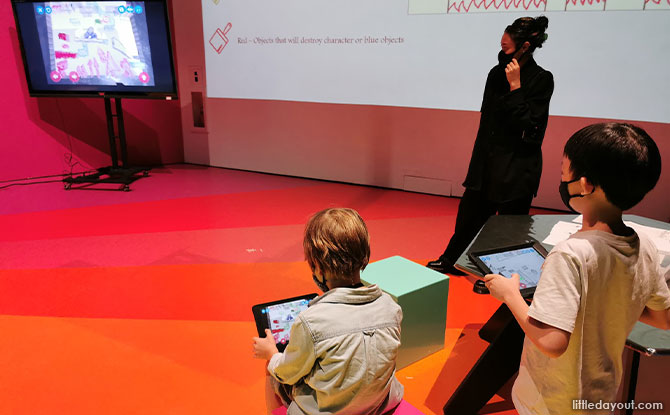 Finally, the session ended with a show and tell with the children presenting their game via the screen and even trying to play each other’s games! Even the adults who were observing wanted a go at playing.

My family and I really enjoyed the tour of Virtual Realms and the mini-holiday camp. Understanding what goes on behind the scene certainly helped us to understand the beauty behind each game and perhaps the draw of such games for our youngsters.

To find out more about ArtScience Museum’s programmes, click here.

Book Review: Who Are The Invisible People? Learning About People With Special Jobs