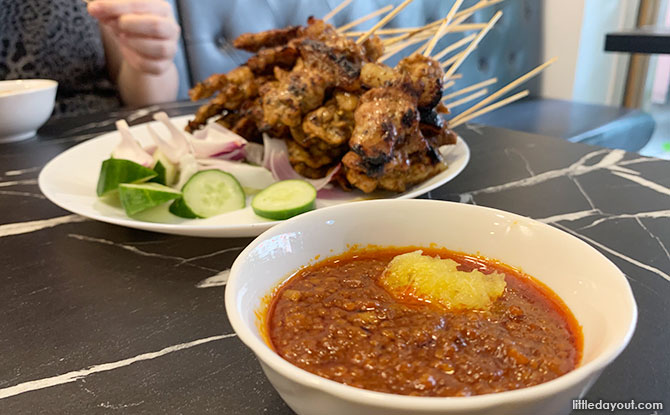 We first heard about Ah Pui Satay, which transitioned from a push cart to a store in Chinatown, last year. However, it was only recently that we had a chance to pay a visit to the Ah Pui Tiong Bahru Satay store at Smith Street to give it a try.

Satay on the Streets

The story goes that since the 1970s Ah Pui would sell his satay in the back alleys of Tiong Bahru from a wooden cart. The satay was so delicious that, even though it was sold illegally, many would buy it from him, that was until his cart was taken away by the authorities.

He now has a stand-alone store which opened last year. It can be found along Smith Street, next to the now-defunct Chinatown Food Street.

We managed to walk-in one afternoon and settled down to order the famous satay. 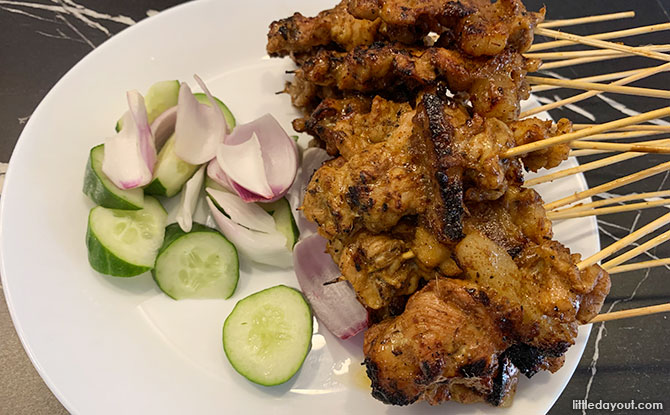 When the satay arrived, we were not disappointed.

The pork meat for the satay were huge juicy pieces, grilled succulently on a skewer. Apparently, all the pork is hand-sliced.

Each stick also comes with a sizeable piece of fat. This made eating the satay a two-part affair. First, a bite into the sweet and tender pieces above the fat followed by a sinfully decadent second bite.

The Hainanese satay comes with a mild peanut satay sauce which has a dollop of grated pineapple in it to give it a bit of a tang.

Each stick of satay costs $1.10 with a minimum of 10 pieces. They were worth the price.

Besides satay, Ah Pui Tiong Bahru Satay also has other menu items like Thai-style chicken wings. However, we would have to return another time to give those a try.