Home Lifestyle A Dozen Hidden Easter Eggs That You Can Spot On Your Next... 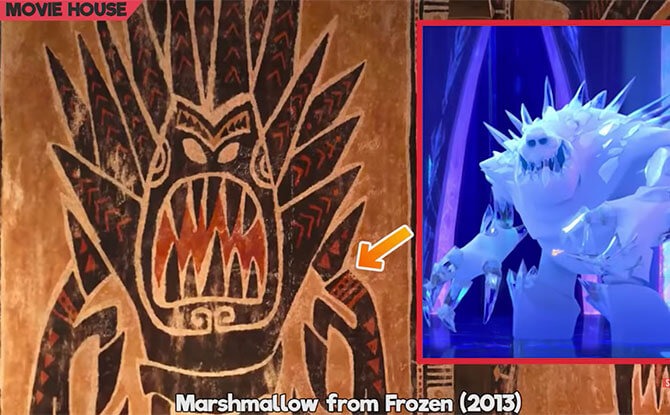 While we can’t go Easter hunting this year, hunting virtual Easter eggs might be a hunt that everyone can have fun participating in while enjoying a Disney or Disney Pixar movie. And no, we aren’t talking about egg-shaped chocolate shells. Disney movies love putting unexpected features and references in movies that eagle-eyed viewers can find. Here are a baker’s dozen Easter eggs in the movies.

A113 is an inside joke Easter egg which has made its appearance in almost every Pixar movie. It’s a nod to the CalArts first-year graphic design and character animation classroom where many artists and animators at Pixar studied.

Delivering pizzas across the galaxies and movies seem to be this pizza joint’s speciality and has made its appearance in every Disney Pixar film to date except the Incredibles. Its appearance in Brave was quite memorable as fans were wondering how they would get it to appear in a medieval setting, but Disney delivered by fitting it into the scene where Merida visits the witch’s cottage.

The Luxo ball is a yellow ball with a blue stripe and red star which first appeared in its own short “Luxo, Jr”. It has made a number of cameos in Toy Story, but also makes its appearance in Up as one of the badges in Russel’s collection.

Nani is such an underrated character who showed what it meant to have sacrificial love for the family before Anna and Elsa came into the picture. She’s brave, loyal and her poster of Mulan on her wall shows that she was inspired by one of the best.

5. Tarzan x Beauty and The Beast

Jane and Tarzan have an interesting dynamic. She fell in love with someone who was raised by another species. Sound familiar? Mrs Potts from Beauty and the Beast might ring a “Belle” Bell. We spotted the iconic teapot’s colours as part of the tea set that Jane brings along with her to the jungle.

In the touching ending scene, before Boo says goodbye to Sulley, she gives him a bunch of her toys including a Jesse doll from Toy Story and a Finding Nemo doll. You can also clearly see the Luxo ball.

This is a personal favourite Easter egg which can be spotted in Disney’s Zootopia. In the scene where the detectives hunt down clues to solve the mystery, they find the weasel selling bootleg DVDs which are inspired by actual Disney movies. We honestly wouldn’t mind “Meowana” being an actual show though.

In The Princess and The Frog, King Triton makes an entrance in a way fit for the king of the ocean. His float is one of the biggest in the celebration parade scene.

The relationship between Aladdin and Genie is one we kind of wish we had. In the scene before Aladdin makes his first wish to become a prince, we see genie transform into a series of things including Pinocchio.

10. Inside Out x Ratatouille

When we see inside a memory orb of one of the scenes from Riley’s childhood, sharp eyes might recognise a familiar character from Ratatouille. Turns out that Chef Colette is on the cover of a cooking magazine “Haute Dish”

During one of his songs, Miguel runs past a table of brightly coloured Mexican folk art sculptures of mythical creatures also known as Alebrijes. These mythical creatures do seem to look familiar and are toy versions of the characters from Finding Nemo

During Flik’s trip into the city, you can see a movie poster of The Lion King which was produced in 1994, four years after A Bug’s Life in 1998.

Apparently despite the differences in climate, the monster in the realm of Arendelle also has influence in Moana’s Island. In one of the storytelling sessions, we see an undeniable replica of the not-so-fluffy marshmallow monster from Frozen. Or maybe most scary mean monsters look the same?

READ: How to Make Hot Cross Buns at Home

Click Here to Get: More Ideas on Celebrating Easter