Home Learn History Zubir Said: 6 Things You May Not Have Known About The Composer... 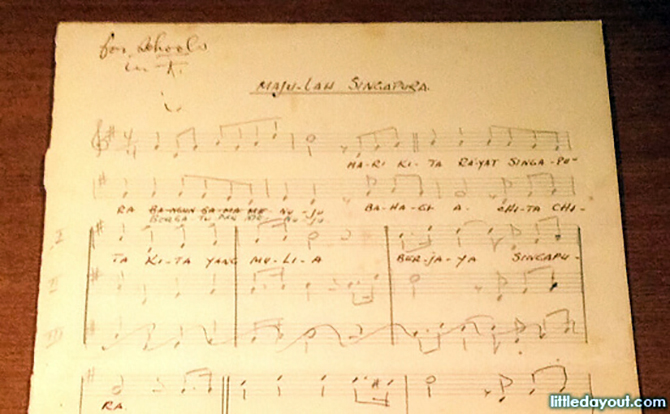 Zubir Said is best known for writing Singapore’s national anthem, Majulah Singapura, which was composed in 1958. It was originally the official song of the City Council of Singapore before being adopted as the new nation’s national anthem.

Said was born in 1907 in Indonesia and moved to Singapore in 1929. He was a prolific composer and his works include the scores for film, radio and the national stage. Said passed away in 1987 but his legacy continues to this day.

Here are some things you may not have known about Zubir Said.

Things You May Not Have Known About Zubir Said

1. His connection with nature and nurture

His belief in “Alam takambang jadi guru” meaning “Nature, when it flourishes, becomes our teacher” was a testament to his love for the natural world and perhaps a metaphorical parallel to tend one’s own gardens, planting and sowing seeds and ensuring continuous growth.

(In the hot season, the flowers in the garden, Are like a riot of colours in bloom, Beetles and butterflies come flying, Visiting the flowers with smiles)

and ‘Cantik Menghijau’ (Beautiful Greenery) where

(Listen to the birds chirping, As if singing takes away their worries, See the beautiful, wide green valleys, A portrait of the hot season).

2. He showed us how lush and beautiful Singapore was, and to examine what it meant to be Singaporean – to be ‘Orang Singapura’ (People of Singapore)

(Beautiful and varied colours They linger in your memory)

and the popular ‘Singapura Oh Singapura’, sunny island it was not!

(Singapore, oh beautiful, special island, Surrounded by the magnificent sea, Singapore, like a ruby That is precious and valuable, That’s my country, that’s where my life is, Where I live happily and peacefully, Singapore, full of trees, leaves, and flowers So special and beautiful).

He extolled the virtues of kindness, resilience, industriousness and respectfulness as noble values of loving one’s country quest for independence, for Merdeka, in the 1950s and 1960s Given our rich history, how do we contribute to the narratives of what it means to belong to a nation state and how we find authentic forms of connection

The National Anthem originally composed for the grand opening of the Victoria Memorial Hall at Victoria Theatre on 6 September 1958 and the tune then chosen as the national anthem when Singapore achieved self- government in 1959. Zubir Said had remarked on the lyrics: “Because it is an anthem of the people and the State of Singapore”, thus the inclusion of words like ‘bahagia’ (happiness or blessedness), ‘cita-cita’ (dreams), ‘mulia’ (noble) and ‘berjaya’ (success).

3. Estranged Father-Son relationship but He Himself was a Loving Grandfather

Intent on pursuing his dream of becoming a musician, he defied his father’s wishes and left his village in Bukit Tinggi, West Sumatra, to settle in Singapore in 1928. Zubir Said’s 101-year-old father eventually reconciled with his son much later.

In Wild Rice’s Don’t Call Him Mr Mari Kita, his own authentic relationships were best represented in Julian Wong’s beautiful rendition of Zubir Said’s song ‘Suhanna’ dedicated to his own granddaughter, which has the last line ‘Kalau ada umurku Panjang Moga-moga kita akan berjumpa lagi’ (Oh Suhanna, granddaughter whom I love………I hope to live long enough To see you grow into your prime).

4. He composed at least 1,500 film songs and scores, popular songs and national songs during his lifetime

The production featured the classic song Sayang Disayang’ (Oh, My Beloved), first featured in the film “Racun Dunia” (Poison of the World, 1950), starring P. Ramlee as a villainous character.

When we watched the show, “Don’t Call Him Mr Mari Kita”, it was lovely to hear an elderly Chinese gentleman beside us singing aloud to ‘Sayang Disayang, a song about life journey’s end,

(The wind howls A branch falls on a gravestone …….The pain that he left me is Like a ship without direction}.

Zubir Said also composed a Hari Raya song “Aidil Fitri” in the 1950s, originally a duet sung by Kamsani Saat and Nona Asiah. In 1973, Sanisah Huri recorded her version of this song which remains popular to this day.

6. He was a man who was forever on a quest for knowledge and passing on knowledge to the next generation of learners

Zubir Said stated that “Knowledge is not meant to be taken to the grave. Those we teach today can teach others later on.” In whatever we do in life, it does matter who gave us inspiration and who have come before us. Our relationships with others can fuel us to strive for more than we may have previously thought we could accomplish.

As a young boy, Zubir Said fell in love with music and his favourite instrument was the violin and he later taught himself how to play the piano and read Western music notation. Zubir Said dedicated the last 20 years of his life teaching children how to read, play, and love music.

This spirit of knowledge, the pursuit of it and sharing it generously struck a chord and very aptly was exemplified in Semoga Bahagia (May You Be Happy and Blessed).

To learn more about Zubir Said, check out the following resources: