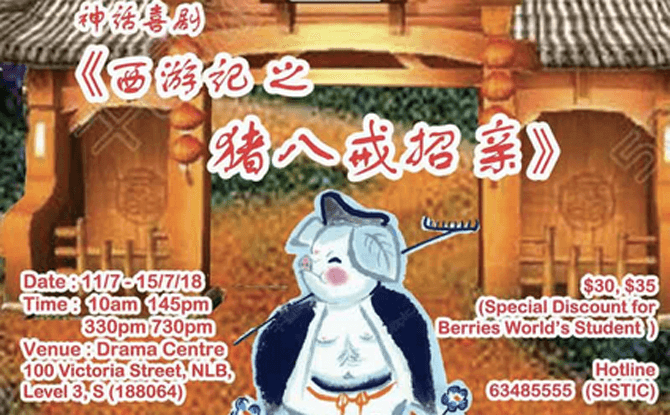 Marshal Canopy made a mistake in heaven and was sent to Earth and reborn as a pig. The Goddess of Mercy Guanyin told him that he would be enlisted as a disciple by someone on a pilgrimage and to wait in Yunlin Cave at Mount.Fuling. He was then given a name: Zhu Ba Jie.

While waiting for the person on pilgrimage, Zhu Ba Jie decided to get a wife. He set up a wedding proposal for all women but those who turned up felt that he is too ugly. So he decided to turn himself into a handsome man and leave the cave.

While walking downhill, he saw robbers robbing Master Gao. He chased away the robbers and saved Master Gao, who invited him to dinner at his manor where he met Master Gao’s daughter. Zhu Ba Jie and Miss Gao fell in love at first sight and Master Gao agreed to marry his daughter to him.

On the day of the marriage, Zhu Ba Jie drank a lot of alcohol and became his original self. All the guests were terrified. Coincidentally, the monk Xuanzang together with his disciple Sun Wukong were walking past Gao’s manor while on their pilgrimage. Xuanzang accepted Zhu Ba Jie as his disciple and thus brought peace to Master Gao.