Home Play Where To Watch The NDP Fireworks 2019 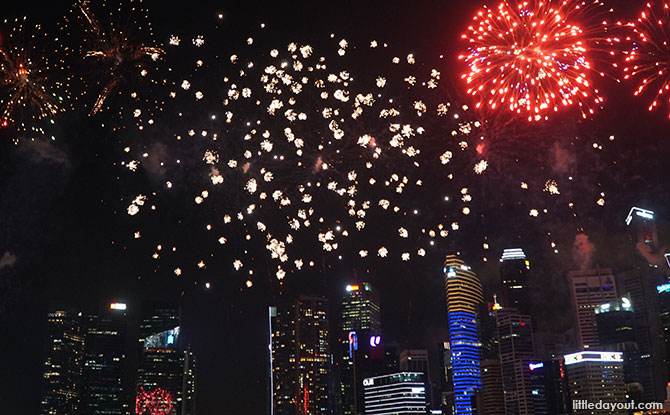 With the National Day Parade fast approaching, we can barely contain our excitement to see the amazing display of NDP Fireworks 2019.

Three Locations with Fireworks on 9 August

This year, the Parade is being held at the Padang and fireworks will be set off at three different locations on 9 August.

The first site with fireworks is, of course, the Padang. These will be low level fireworks choreographed to music at this location.

Marina Bay will be the site of high-, mid- and low-level fireworks. The NDP fireworks 2019 at Marina Bay be fired from a 450-metre long barge, the longest in the Parade’s history.

The 5-minute firework display are expected to begin at around 8 pm.

Fireworks Displays in the Heartlands on 10 August

There’s more. On 10 August, the National Day celebrations head to the heartlands.

In addition to the mobile column making its way around Singapore, there will be carnivals at five heartland locations. The carnivals will feature a four-minute firework display, the first time since 2005 that there is a fireworks display in the heartlands.

Places to View the NDP Fireworks 2019

If you are planning to head out to catch the NDP Fireworks 2019 on 9 August, particularly those at Marina Bay, here are some locations to stake out.

Marina Bay Sands and the Promenade are practically front row seats for the Marina Bay fireworks. It is a good spot to get very nice symmetrical shots with the city’s skyscrapers in the background. But, you can expect it to be ridiculously crowded with plenty of people to jostle with. Be sure to arrive early.

If you want to catch the fireworks that are being set off from the Singapore River, specifically along Boat Quay, the Elgin Bridge and Coleman Bridge provide nice vantage points with views of the city’s skyscrapers in the background.

To ensure a good spot wherever the location you pick, we’d recommend going early and perhaps having some tabao-ed dinner and a picnic with the family while waiting for the fireworks to fill the sky.