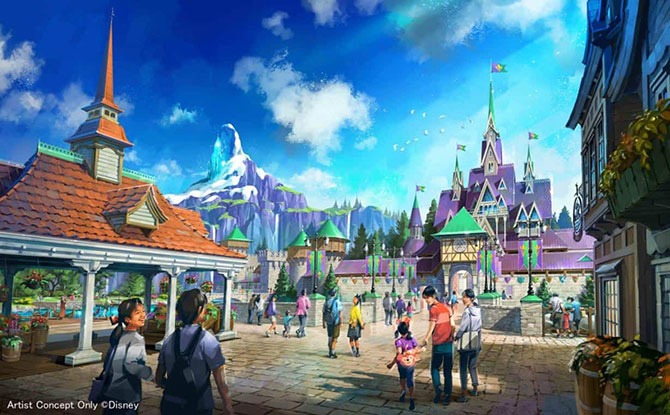 Tokyo DisneySea in Japan is one of our favourite theme parks. And there is going to be even more reason to want to pay it a visit in 2023 when the Fantasy Springs theme port is due to open.

Showcased by Tokyo Disney Resort on 15 April 2021, the Fantasy Spring theme port looks like it will be an amazing place to visit. Teasers for Fantasy Springs were unveiled in the form of series of videos with a “fly-through” a 1:50 scale architectural model.

The Frozen-themed areas will have Arendelle Castle and Elsa’s ice fortress. There will be a boat attraction based on the animated film at the Frozen section of the theme port.

Fans of Rapunzel will also be excited to know that Fantasy Springs will have a tower themed after the heroine’s abode. The Tangled themed area will also have an attraction and a restaurant.

The last animated classic which will grace DisneySea’s Fantasy Springs is Peter Pan. The area in Fantasy Spring devoted to Peter Pan will even have a sailing ship.

This theme port has been long in the works. In 2015, it was originally announced that a “Scandinavian” theme port would be added to Tokyo DisneySea. However, the development was temporarily put on hold.

In 2018, there was more news that Tangled and Peter Pan would be added to the port and a new hotel would be built there as well.

Now with this latest 2021 unveiling, hopefully the plans for Fantasy Spring to be launched in 2023 will not be thwarted.

DisneySea’s Fantasy Springs extension will add 140,000 square metres to the Tokyo Disney Resorts park. This will be the largest expansion in Tokyo DisneySea’s history and will be connected to the rest of Tokyo DisneySea by a pathway that runs between the Lost River Delta and Arabian Coast theme ports.

It is scheduled to open in 2023, although some say that the opening could be in the fiscal year of 2023, in other words, up to till March 2024. Whatever the case, we look forward to it opening in due time.