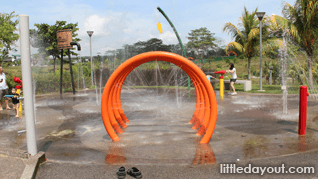 Some children splash among jets of water while other children build sandcastles next to swaying coconut trees and a flowing river a stone’s throw away.

Is this an island resort far, far away? No, it is right in the centre of a new lifestyle being built around the Punggol Waterway.

The Punggol Waterway Park is designed for families and consists of a water play area, a sand pit, a fitness corner and the Adventure Bridge. 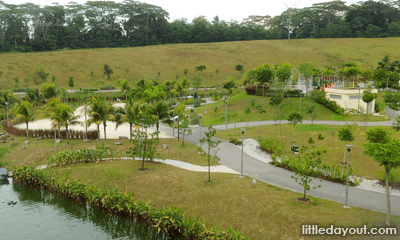 The main attraction of Punggol Waterway Park is its water play area where spray tunnels create a spider’s web of mist, geyser-like water jets sprout up from the ground and water cannons stand ready to jet water at those in need of a dousing. While there are places where you have to pay a pretty penny to access such water fun, it is absolutely free at Punggol Waterway Park. However, and rightly so, the water play area does not operate until someone presses the button on the fire-engine red pole with an arrow labeled “Press Here”. 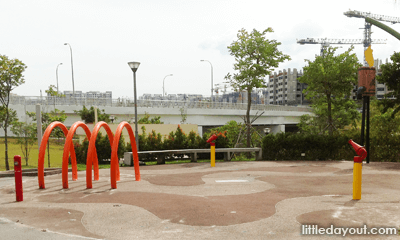 I wonder what this button does…

For those who prefer sand to spray, head down the terraced banks of the park to a sand play area. Sitting by the  banks of the Waterway, this sand pit offers white sand for play with idyllic coconut trees decorating its edge, evoking the feel of carefree kampong days. As close to a beach as you can get along the Waterway.

Rounding up the rest of the facilities of the Punggol Waterway Park is a fitness corner for the adults and the Adventure Bridge.

The bridge, even though a suspension bridge by design, is extremely stable. Secretly, we wished it would sway more as we crossed the bridge to the far bank which has terraced slopes, reminiscent of how rice is farmed in parts of Southeast Asia. 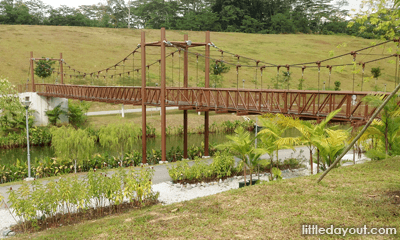 Have an adventure, but on foot please…

What we like about the Punggol Waterway Park is that there are a variety of activities for the entire family in a compact area. The water play area is free and there are toilets nearby for kids to wash up aftewards. The sand play area provides a good alternative activity and the sand is abundant.

It is most easily accessible from Sentul Crescent and there are two car parks serving the Park. The car park that is NOT adjacent to a block of flats is more conveniently located right next to the Waterway Park. From the other car park, you have to walk across the vehicular bridge to get to the Park.

What Else is Around Here?

While you are there, you may also be wondering what else is along this stretch of water. Dubbed My Waterway@Punggol, the river stretches the length of Punggol from Sungei Punggol in the West to Sungei Serangoon in the East. The Waterway has a paved track alongside it for its entire 4.2 km length. There is plenty of construction going on but these are well-hoarded and the pathway has plenty of shelters and lookout points along the way.

West of the Waterway Park: Heartwave Wall and Sunset Strip The Heartwave Wall recount Punggol’s past, from the time when the earliest settlers cultivated rubber and coconuts in plantations to the development of the Punggol 21 vision. With the different wall panels, you can share with the kids about what Singapore was like in the past and how far we have progressed. 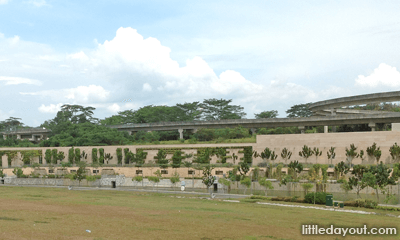 Heartwave Wall from the far bank 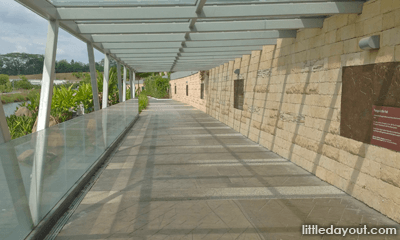 Covered walkway along the Wall 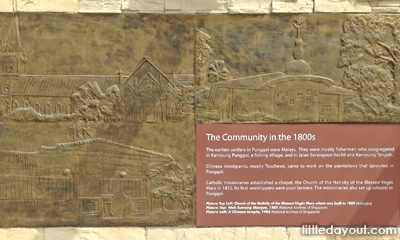 Next to the Heartwave Wall is the area designated to be the Town Centre. Sitting on a bend of the Waterway, it is currently a hive of activity. With a wide square facing the Waterway, one can imagine that this would be a bustling centre in the future once the amenities are ready. 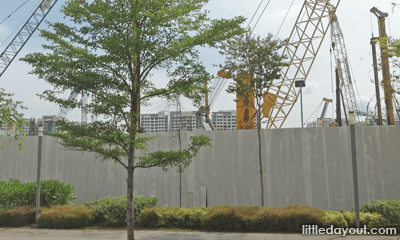 The future Town Centre being built Riverside pavilion for the Town Centre

To the west of the Town Centre area is the Sunset Strip. A distinct landmark is the harp-like vehicular bridge. Also keep an eye out for a mural of love-struck robots along the Sunset Strip. 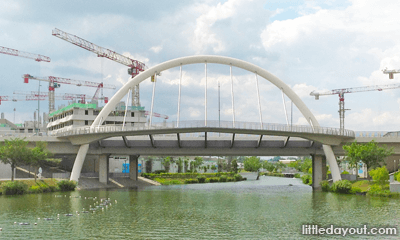 Arc Architecture Arching over the Waterway The flat and even riverside path along the Sunset Strip make it ideal for those that want an easy evening stroll or cycle with the kids. The are also many lookout points that can be found along this stretch of the Waterway and, of course, if timed right, you can catch the sun setting from the Jewel Bridge. 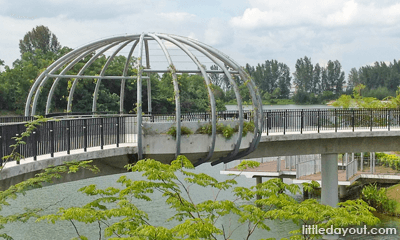 Close up of the Jewel Bridge

From the Punggol Waterway Park, another loop you can also take is that from the Adventure Bridge to the Kelong Bridge. This length of the river is known as the Watersports Promenade.

The Kelong Bridge, which marks the end of the Watersports Promenade, is inspired by a kelong, or offshore fishing platform with stilts. Other landmarks you will find here include a Boardwalk which extends over the water, and a white tarp that evokes the sails of sailboats. A Malay-style lookout point reminds us of Punggol’s village roots and a Heritage Walk preserves an old bus stop and a stretch of the original Punggol Road. 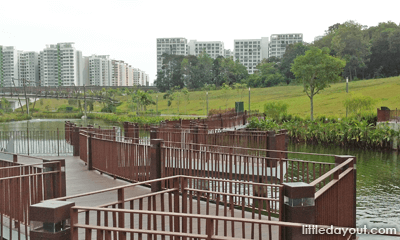 The Boardwalk brings you close to the water 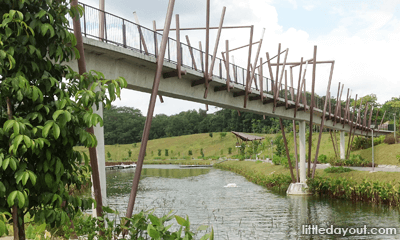 Overview of the Watersports Promenade

Beyond the Kelong: For Intrepid Explorers

Those that wish to venture beyond the Kelong bridge should take note that there is much less for kids to see and do there at the moment. While the path by the Waterway is well developed, the facilities are less developed. Barbecue pits for the future?

We can imagine that those with kids on bikes seeking a little adventure can head east of the Kelong Bridge. If your kids found the flat and even path along the Sunset Strip and Watersports Promenade boring, the track beyond the Kelong Bridge dips and rises, making it more interesting terrain for intrepid cyclists. Why is the road so wavy?

Two more bridges can found along this stretch of the Waterway. The first is the quite unremarkable Wave Bridge. Who knows what it would be developed into in the future but for now, it appear as a functional bridge that connects the far bank to the LRT line nearby. 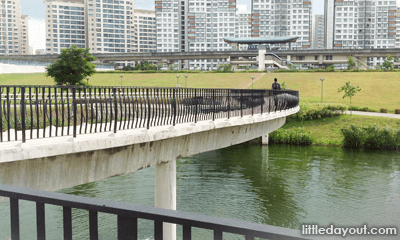 On Wave Bridge looking back towards Punggol Estate

The other bridge is the Sunrise Bridge which marks easterly end of the Punggol Waterway. The Sunrise Bridge, and the area known as the Sunrise Gateway, is where the Punggol Waterway meets Sungei Serangoon. From here, you can see the adjacent Lorong Halus Bridge which beckons intrepid explorers across the Serangoon Reservoir toward Pasir Ris. Alternatively, a path also leads northwards towards the coastline facing Johor and Pulau Serangoon. At the Sunrise Bridge Looking at the Sunrise Bridge Venture into the Lorong Halus Wetland?

On the whole, the Punggol Waterway Park and the entire stretch of Punggol Waterway provides a glimpse of the future and it looks to be one where Singaporeans willing be enjoying the water. Of course, we do not have to wait till that future to enjoy the Waterway.

As it is, the Punggol Waterway Park and the different stretches of the Waterway are already perfect for walking, jogging, cycling, picnicking, water play, sand play and, of course, that Little Day Out.

You can visit the NParks website for Punggol Waterway Park.

5 Handy Tools To Get Kids Involved In Spring-Cleaning