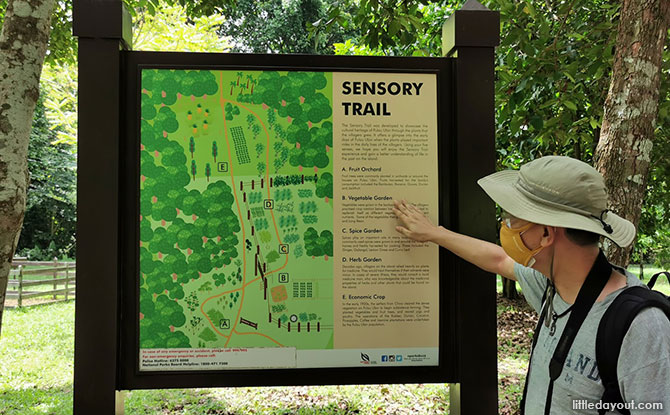 If you have explored Pulau Ubin, chances are you would not have gone to the Southern part of the island where the Pulau Ubin Sensory Trail is. There are two entry points, take the path along the police station or near Teck Seng’s place. Interestingly, the trail was developed in 1995 for the visually handicapped to experience Ubin using their senses. The trail would enable them to see, touch, smell or even taste some of the plants along the trail, listen out for birds and animals. It also showcased the cultural heritage of Pulau Ubin through the plants that were commonly found. 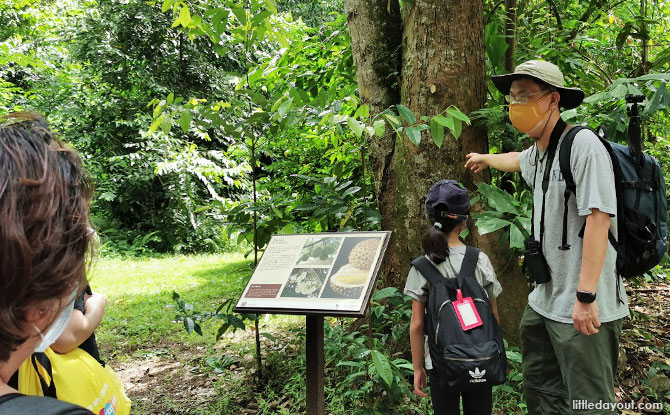 The 1.5km natural trail is a trail well worth exploring. There are grand heritage trees to admire, a small garden with fruit trees, spices, herbs, vegetables and even tea! We entered the trail using the entrance near the police station, on the right side of the jetty. After passing a kampong house and seeing a chiku tree, we entered the tranquil forested area which led us to the Sensory trail. 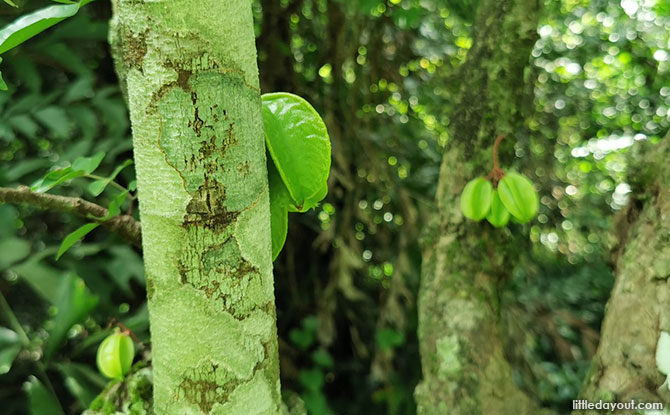 At the start of the trail, look out for a strangling fig that has enveloped a tiny building. This tiny building or perhaps more appropriately a shed was used for storing dynamite to blast granite at Ubin. Before this, it was an oven used by a French family for baking bread for sale! A Banyan tree or a Strangling Fig has since overtaken the little structure, you have to look really hard to realise that there used to be a manmade structure.

The first plot on the left is the Fruit Orchard. We could see banana trees, Starfruit tree, a Rambutan tree that was languishing, a Jackfruit tree, Guava tree and an Assam Gelugor tree. Families at Pulau Ubin typically harvested them for their own consumption. Fruit trees are also a sign of wealth and abundance. Here, children can see fruit trees not often seen in Singapore and how they are actually grown and harvested. It’s an eye opener especially to the city folks and many older folks would easily relate to the times they had their own fruit trees!

Spices, Herbs, even Coffee and Tea 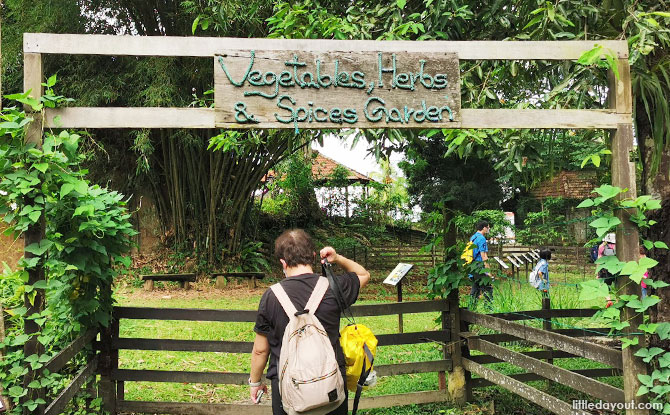 On the other side across the Fruit Orchard is the gated garden where there are vegetables, spices, herbs and other economic crops grown. See if you can spot the winged bean plant hanging off the arches of the entrance. This plant is frequently used in our dishes and many love it paired with sambal chilli. The citronella plant was particularly fragrant when bits of it are crushed in the palm.

We also spotted the Elephant Foot Yam infamous for its flower that smells like a rotting animal. Its scent actually attracts insects for pollination. 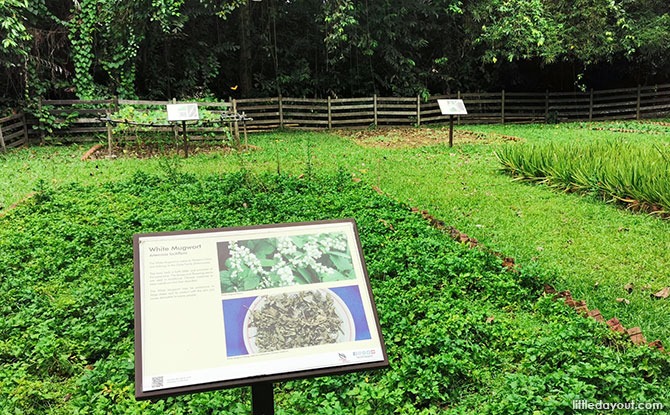 Other less common medicinal plants we saw were Toothache plant, White Mugwort, Common Plantain – all of which had natural healing properties for different ailments. We also saw tea and coffee plants. I never thought I would see this in Singapore but the fragrance of the jasmine tea bushes were attracting butterflies and dragonflies as well. One fruit that I have never seen was the Assam Gelugor fruit which is a common spice in assam dishes. It looked very much like a little pumpkin with its vibrant colour and shape.

We also saw rubber trees, which was common in Pulau Ubin’s past where rubber plantations were commonly found.

The wildlife in the area was aplenty. We spotted a family of wild boars, saw Magpie Robins and Straw-headed bulbuls amongst other creatures.

Forest Trail Past a Tidal River, Mangroves and Lotus Pond 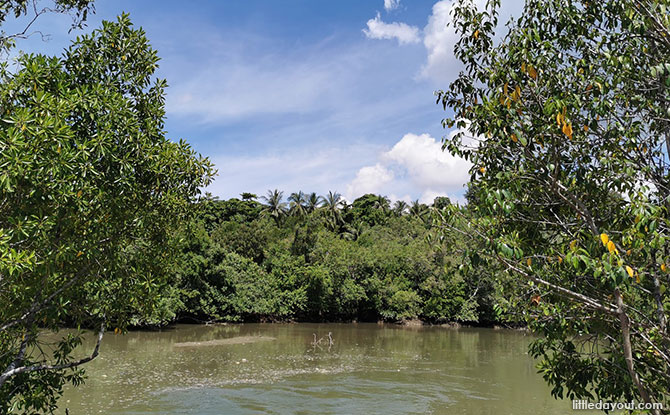 The forest trail led us towards the tidal river where we saw a mangrove forest. Homes of termites and mud lobsters were aplenty.

Did you know that Pulau Ubin was once a cluster of five smaller islets separated by tidal rivers. Since then, the islets have been connected through the building of bunds for prawn farming.

The routes we took were quiet and had hardly anyone walk through. For a while, we felt like we were in a foreign land surrounded by nothing but nature and its sounds. After passing through the mangrove forest, we were back in the midst of secondary forests next to a huge lotus pond. We were told that part of the reason why some of the ponds yielded so much biodiversity was because of its ground being fertilised naturally by its past. Some of the land used to be pig farms!

After admiring the fish, lotus, herons, dragonflies, we continued on our way and soon passed Teck Sang’s house, then the village centre. Take note that off the Sensory Trail is where the wild boars hang out. About 50 metres into the trail, after the Sensory Garden where crops are grown, there are mud pits where the wild boars get their mud bath. The mud bath keeps them cool and there is an actual term for this behaviour – wallowing! The mud is also a natural sunscreen since the sun on Pulau Ubin may be especially harsh.

Be warned, find the mud pits at your own risk. If you see any wild boars in the vicinity, avoid their pits as you could be seen as a threat.

It was a very family-friendly trail not too long in length and the terrain pretty much flat ground. It’s a great place to introduce the younger generation to Singapore’s past and learn about various plants, while getting up close with nature. We’d highly recommend the Pulau Ubin Sensory Trail for families.