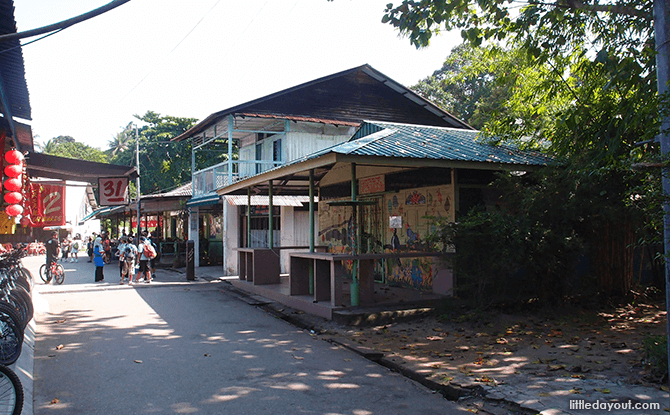 During the holidays, a friend and I decided to take a day trip to Pulau Ubin with kids. Our group consisting of three adults and four kids, aged between four and eight.

To get to Pulau Ubin, we started our adventure at the Changi Point Ferry Terminal. The terminal is located at Changi Village, next to the bus terminal. There are car parks conveniently located right next to it as well. 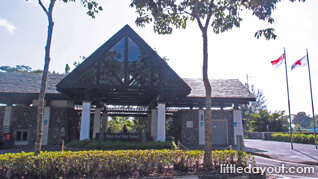 At the ferry terminal, we waited for the bumboat which would take us to Pulau Ubin.

Each ferry sits up to twelve passengers. Once there are enough people to fill a boat, the ferryman will signal you to follow him. You pay the fare when on the boat and it costs $2.50 per passenger for a one-way trip. The four kids thoroughly enjoyed the 10-minute bumboat ride to Pulau Ubin. (Note from the Editor: The bumboat fare now costs $3 per trip.) 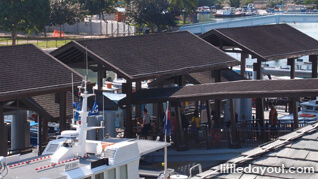 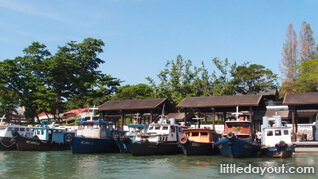 Upon arrival at Pulau Ubin, to the left of the jetty is the Pulau Ubin Taxi Kiosk. From here, you can book at mini-bus taxi with a distinctive “PU” licence plate to take you around the island. 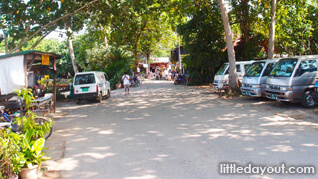 We also got our first glimpse of Ubin Town, located just behind the taxi stand. This small village is a collection of old wooden buildings with bicycle rental shops, restaurants and the odd provision shop. It looked right out of rural 1960’s Singapore.

A Nature Walk for the Senses

Before heading into Ubin Town, the kids insisted on exploring the area on the right of the jetty. Walking away from Ubin Town, we came to the Sensory Trail. This walking trail showcased different plants including the Pandan, Banana and Betal plant. 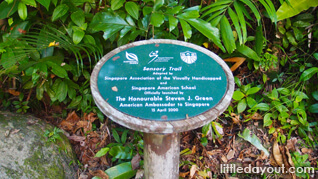 After our walk, it was time for lunch. We headed over to Ubin Town to look for food.

There was a fair number of restaurants to choose from. We soon settled down at the Season Live Seafood Restaurant. This restaurant is located next to the sea and before long, we were tucking into a delicious meal of hor fun, mee goreng, fried rice and eggs with prawns. 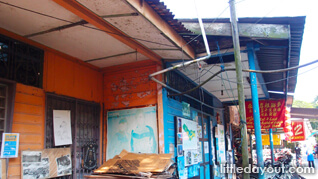 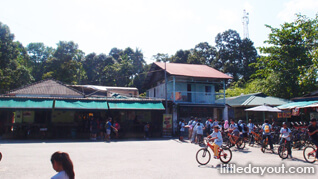 Cycling Our Way to Adventure

After lunch, the kids pestered us to get bicycles to explore the island.

We ended up getting the two older ones their own bicycles (with training wheels since they didn’t know how to cycle properly yet). The six year old took a tandem bike with her father. The four year old got into a child bicycle seat behind her daddy as well. 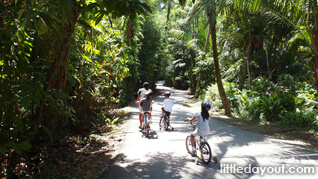 Heading off, we cycled along a metalled road, meandering past old wooden houses and coconut trees. Cycling around the island evoked an idyllic feeling and the serenity the place soon made us forget the hustle of urban Singapore.

The terrain on the metalled road was relatively gentle and easy to cycle along.  Occasionally, vehicles, mainly Ubin Mini-Bus Taxis, came running by. Do keep a lookout for them and move the kids to the side once you hear them coming.

The Road to Chek Jawa

About 1 km into the island was the turnoff to Chek Jawa. Feeling adventurous, we decided to make our way there. Before long, the metalled road soon became a gravel track. Parts of the track were too steep to ride up. We had to get off our bikes and push them uphill. The incline was quite challenging for the kids and the adults had to help them with their bikes. 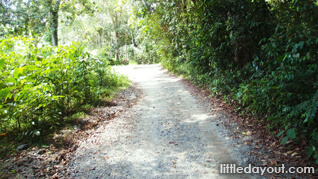 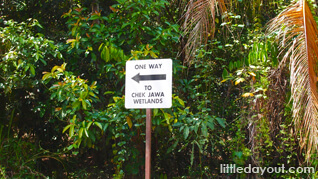 Half way to Chek Jawa, we chanced upon a family of wild boars which suddenly came out of the forest onto the bike path. Caught by surprise, we quietly watched as the mothers and babies made their way across the bike track and wisely decided to leave before the males came around. 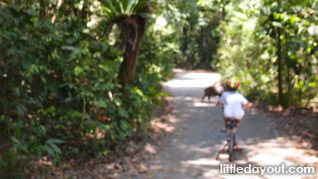 After more than an hour, we finally arrived at Chek Jawa. 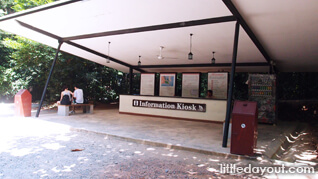 At Chek Jawa, there are two main boardwalks and a lookout jetty that is open to visitors. The kids decided on the Coastal Boardwalk path. This consisted of both a footpath and a boardwalk that led us around the shoreline of Chek Jawa. From the boardwalk, the kids enjoyed the cool sea breeze and even though it was high tide, the shoreline was still teeming with wildlife. The kids managed to spot mudskippers and colourful fiddler crabs around the mangrove swamp. 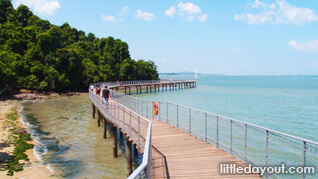 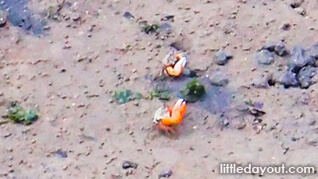 While at Chek Jawa, don’t miss the chance to visit House No. 1, located behind the Information Counter and on the way to Viewing Jetty. This cottage is built in a Tudor-style and is now a Visitor Centre. The kids had a fun look around the building which has the only remaining fireplace in Singapore. 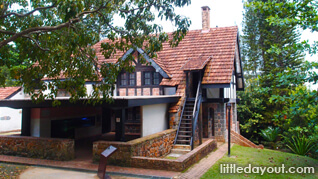 Take Me Back to Town

Soon it was time to set off back to Ubin Town. As part of the one-way road system leading to Chek Jawa, we boarded our bikes and took a different dirt track back to the main road.

This time, the distance seemed shorter but also felt harder going. Undulating terrain meant that we had to push the bikes for a large part of the way back. By then, the kids were pretty tired (except for the four year old who was sitting comfortably at the back of the bike). The adults had to do more work to move the bikes up and down the slopes.

We were thankful when the gravel road ended and we reached the metalled road again. From there, it was an easy pedal back to Ubin Town and before long, we were back on a bumboat. Another $2.50 per head later, we were on our way back to mainland Singapore.

An Adventurous Day Out

Overall, the kids found the visit to Pulau Ubin to be a fun adventure. There are also other sights on Pulau Ubin, such as the quarries, to explore. However, those would need to wait for another day out in the future.

Tips for Planning a Day Out to Pulau Ubin with Kids

Read also our Little Reporter’s account of her little day out at Pulau Ubin.

Read: How to Get to Pulau Ubin