Home Lifestyle Humour 60+ Military Jokes To Get Your Attention 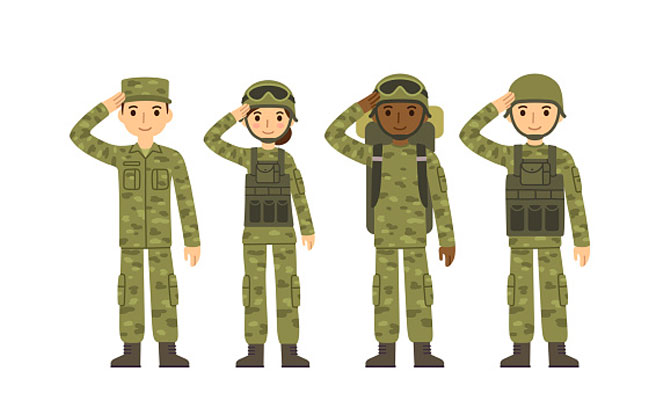 They say that in the army the troops are disciplined but we’re sure there’s always time and space for a laugh or two. There are many branches of the military such as the army, the navy, the air force, and other security forces. Here are some great military jokes to share with the rest of the platoon.

Military Jokes That Are Top Rank 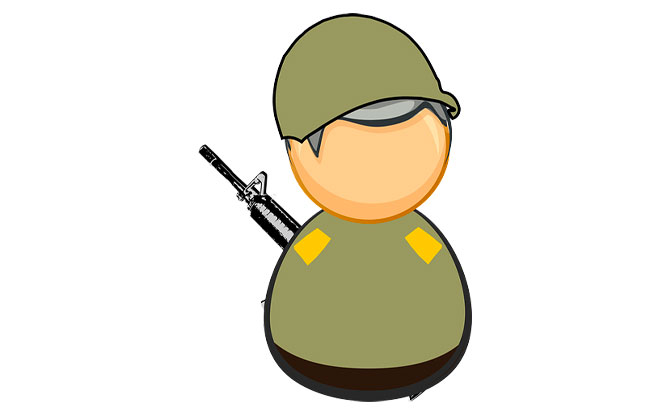 1. What month do all troops hate?
March.

2. What branch of the military do babies belong to?
The infantry.

3. What military rank do you hold while using a pay toilet?
Lieutenant

4. What kind of breath mints do military officers use?
Tac-tics

5. Why was the sergeant mad when his son brought home an A in math?
His son spent more time dividing than conquering.

6. What do you call a high-ranking soldier who hates recycling?
General Waste.

7. What date is a military command?
March Fourth!

8. Why couldn’t the marine play cards?
The captain was sitting on the deck.

9. What do you call a deer enlisted in the Air Force?
A bombardeer.

10. What’s the difference between a Navy aircrewman and an otter?
The otter knows he’s not a seal.

11. Why are military officers orders vague
Because they always talk in General terms

12. What did one troubled sailor say to the other?
“We’re in the same boat.”

13. Where do Generals keep their armies?
In their sleevies.

14. Did you hear about the karate master who joined the military?
He saluted and nearly chopped off his own head.

15. Why do SEALs fall backwards off the boat?
If they fell forward, they’d still be in the boat.

16. What do you call a weapon which is fully loaded with ammunition? You call it a ri-full!

17. Where do rabbits learn to fly?
The hare force.

18. What do you say if an unknown army ranger tries to strike up a conversation with you? You call it a ranger danger!

19. What do you get if you accidentally drop a piano on a military base?
A flat major.

20. What usually happens to any soldier who visits an enemy bar to do his stand up set?
He usually ends up bombing!

21. How do you describe an exercise sergeant who is very calm and polite in nature?
You say that is the drill sergentleman!

22. What do you call a soldier giving birth to a baby on a fighter jet plane?
You call the baby airborne!

24. What is the best way to refer to a military officer who always makes you stay with them?
You call him a company commander!

25. What happens when a military soldier makes cookies made out of chocolate chips?
You are going to find a lot of shells of M&M on the floor!

26. What do you call a military officer who visits the bathroom way too often?
You should call him a lootenant!

27. What do you call a snail aboard a ship?
A snailor.

28. What is the ideal name for a regiment of bunny rabbits who have been trained by the military to fly in the skies? You say that they are the hare force!

29. Why was the major angry when the owl decided to take a leave without informing the authorities?
Because the owl went AWOL!

30. What is the best way to refer to a military private who completely exposed his position to the enemy?
It no longer is private but is now public!

31. Why does the Norwegian Navy put bar codes on their ships?
So when they return to port, they can Scandinavian.

32. What is the ideal way to call a military soldier who has a couple of tours under his belt and can take very good care of animals?
You most definitely refer to him as a vet!

33. Which is the only place of a military barrack that requires the maximum cleaning?
It is usually the Mess hall!

34. What is the best way to describe a soldier who goes to work in the midst of a game?
You call it a deployment!

35. What do you call a military soldier who ends up saving a couple of important things?
You call it the reserves!

36. What do you do if you find a marine who is very hungry? You offer him a sub sandwich!

37. What do refer to the officer who commands a regiment of the star force?
You most definitely call him as a stargent!

38. Which is the ideal way to describe the post of 10 military captains?
You call it a capten!

39. What do you call a military officer who always loves playing melodic pentatonic major scales and no minor scales?
You are bound to call him a flat major!

40. What is the main similarity between a military veteran and a professional volleyball player?
They both know how to serve!

41. What is the main difference between the training of the military and that of the boy scouts?
The boy scouts usually have a lot of adult supervision!

42. What does a military soldier usually do if he has to go out to have dinner?
He usually makes the reservations!

43. Why was the military private scolded when he questioned the color of the navy uniform?
Because he asked why the navy uniform was navy blue in color and not aqua-marine!

44. How does a navy officer bid goodbye to a coast guard? He usually says, “Sea-l you later”.

45. Why was the guy who just passed high school and wanted to join the navy rejected when he was asked if he knew how to swim or not?
Because he instantly replied, “Won’t there be any boats in the navy?”

46. What is the best way to define the navy of a nation that is highly conservative?
They usually call the navy a censor ship!

Hilarious Miltary Jokes And Puns To Laugh At 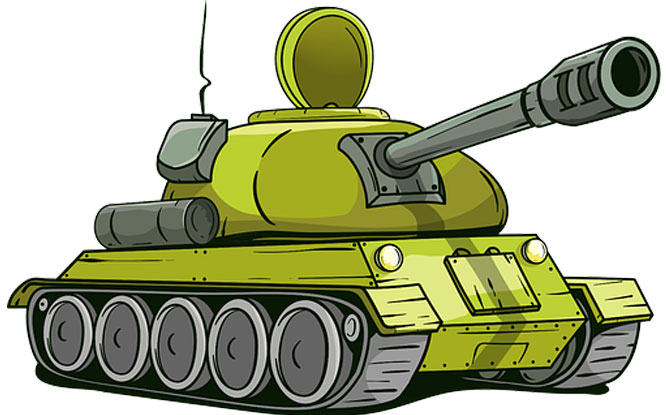 We’ve enlisted some of the best military jokes and puns from all the various branches of the military to get everyone in the troop in attention and laughing.

47. Can someone please tell me what the lowest rank in the military is?
Every time I ask someone they say “it’s private.”

48. I’m about to lose my job in the Navy unless I make some drastic changes.
I have to take a course in anchor management.

49. Did you hear about the accident on base?
A tank ran over a box of popcorn and killed two kernels.

50. An ice cream cone and a slice of cheesecake joined the army. They eventually abandoned their fellow soldiers.
They are now wanted for dessertion.

53. Just because there are no complaints, doesn’t all mean parachutes are perfect.

54. My papa was a veteran, and he used to boast about how he saved more than 300 sailors from dying from an excruciating death.
Turns out he fired the cook.

55.I was seriously considering stealing a military strategy board game from the store yesterday but i didn’t. I’m not much of a Risk taker.

56. Two fresh sailors were talking about assignments they would like to get.
Sailor 1: “Someday I’d like to ride on a submarine.” Sailor 2: “Not me! I wouldn’t set foot on any ship that sinks on purpose.”

57. My friend has a really unhealthy relationship with Navy vessels. He warships them.

58. After years in the Military, the soldier survived mustard gas and pepper spray and was proud to finally be able to call himself a seasoned veteran.

59. A drill sergeant grumbles at his fresh young trainee, “I didn’t see you at camouflage training this morning, private.”
“Thank you very much, sir,” replies the soldier.

63. A soldier shows up for military training but realizes he forgot to bring his gun.
The sergeant hands him a stick and gestures to the training field.

“You’ll have to use this, soldier. If you need to shoot someone, just aim your stick at them and shout ‘Bangity bang-bang’. If someone gets too close to you, poke them in the gut with it as though it was a bayonette and shout ‘Stabbity stab-stab’. Now get moving.”

The soldier thinks this is pretty ridiculous, but to his surprise, when he aims his stick at a fellow trainee across the field and shouts “Bangity bang-bang!” the other soldier goes down in a theatrical display. Then, another trainee tries to run past him, so he pokes the guy in the ribs and shouts “Stabbity stab-stab!” and he too goes down, pretending to be dead.

So, the soldier starts running through the mock-battlefield, shouting “Bangity bang-bang” and occasionally “Stabbity-stab-stab”, until eventually, he realizes he’s the last man standing.

He’s feeling pretty proud of himself until another soldier rounds a corner and starts walking toward him. Slowly. Stiffly. Menacingly.

The soldier takes aim with his stick and shouts, “Bangity-bang-bang!”

But the other soldier doesn’t go down this time. He keeps approaching, arms stiff at his sides, boots stomping aggressively into the ground.

The soldier begins to sweat. He clears his throat, adjusts grip on his stick and hollers, “Bangity bang-bang!”

But nothing happens. The other soldier keeps marching toward him.

But to his dismay, nothing works.

Finally, the other soldier reaches him, kicks him in the shin and knocks him onto the ground.

He stands over the fallen soldier and says:

64.  A soldier orders a pizza and the waitress asks if he’d like it sliced into four pieces or six.
“Make it four. I’m not hungry enough for six.”

Alien Commander: This is problematic, are they really such an intelligent species?

Alien Scout: Apparently not Sir, they appear to have them pointed at themselves.