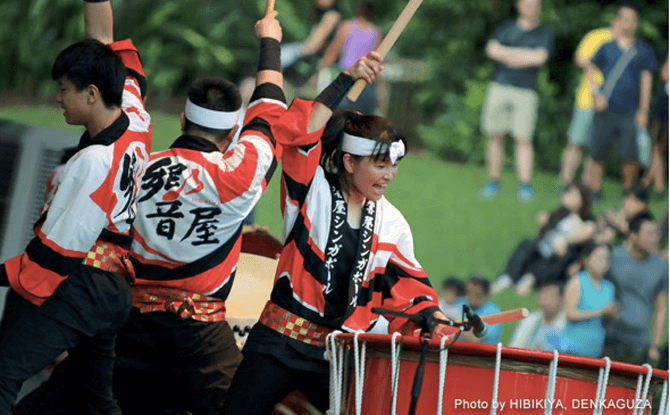 HIBIKI Ⅵ celebrates the 10th Anniversary of TENKO together with HIBIKIYA’s main performers along with our special guest group, Dengakuza, from Japan. 2017 also marks the 20-year-Taiko journey of the founder of Tenko and Hibikiya, Namiko SAKAI.

During the concert, you will witness some of the signature pieces of HIBIKIYA as well as some new songs, including the theme song of this concert composed by Domu Sakai, the son of Namiko Sakai.

Dengakuza, which celebrated its 50th Anniversary last year, is one of the very active groups introducing Japanese Local cultures, not only in Japan, but also in other countries. They have performed in Mexico, Hungary and Korea. Their extensive repertoire includes traditional music and dances as well as their own original compositions that are played by many Taiko groups around the world.

HIBIKIYA has been playing DENGAKUZA’s compositions, and the founder, Namiko SAKAI visited their home ground, Nagano in 2016 and invited them for this special concert to celebrate its Anniversary together. The two groups persisted in continuing to promote local traditional arts which has enabled them to come together and create this concert.