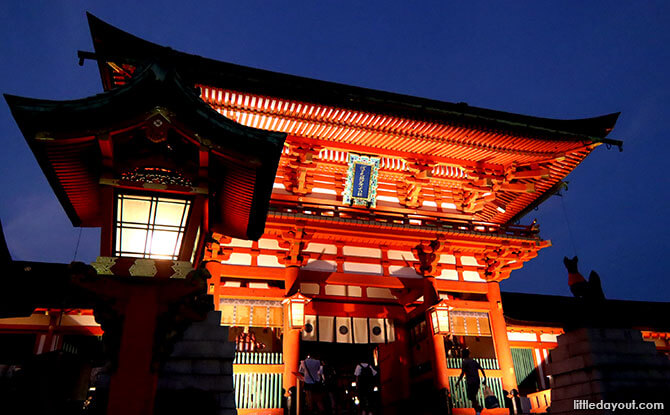 For the fifth year in a row, Trip Advisor Travellers’ Choice has ranked Fushimi Inari Shrine in the south of Kyoto as the top landmark in Japan. It’s easy to see why even if you know nothing about Inari, the god of rice, and are not a Shinto devotee. The unending series of red torri gates are an unmistakable trademark and one of the most Instagrammable backdrops. Moreover, the way the gates wrap themselves up the gentle-sloping 233-metre tall Mount Inari make it a fun, grand and stately stroll amidst nature even for kids. 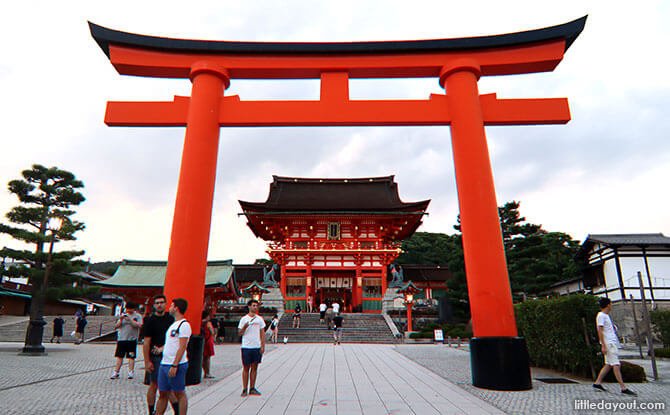 At the onset, the Fushimi Inari Shrine looks like any other temple with its bright red façade, curved roof and ornate decorations beyond the first giant torri gate. General Toyomoti Hideyoshi donated the double-storey Romon Gate (main tower gate) at the entrance in 1589. 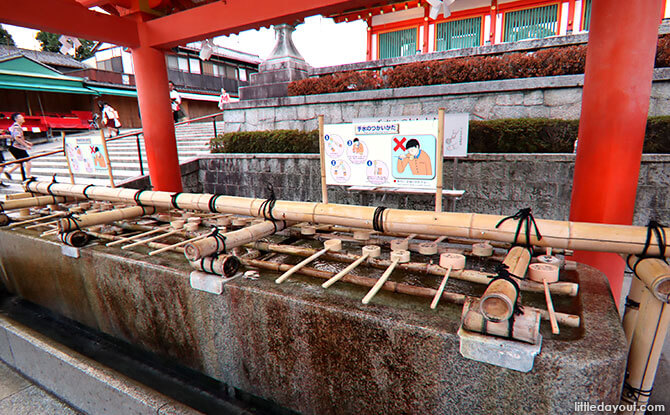 Near the entrance are water fountains for the purification of your hands and mouth before you approach the main hall. 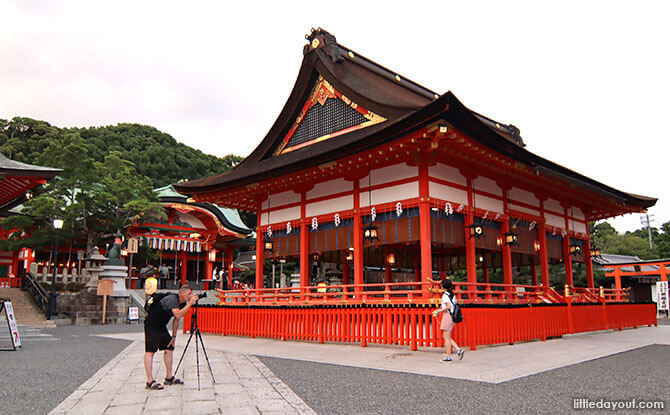 Thereafter, you will find worship halls, the dance stage, sub-shrines and the main shrine. 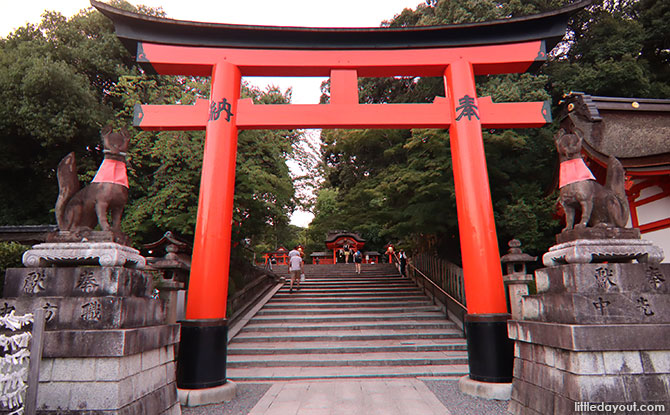 A pair of guardian dogs or lions, known as Komainu,is typically found on each side of a shrine entrance. At Inari Shrines, they are foxes, recognised as the messengers of Inari. To kids, these “dogs” add to the charm of the place. One of the foxes will typically hold the key for the rice granary in their mouths. If you like some guidance and further insight on this head shrine of all Inari shrines throughout Japan, look out for the maps and signages around the Shrine with a QR code. Simply scan the QR code with your smartphones and listen to the audio guide as you walk around different parts of the shrine.

Trails of Thousands of Torri Gates 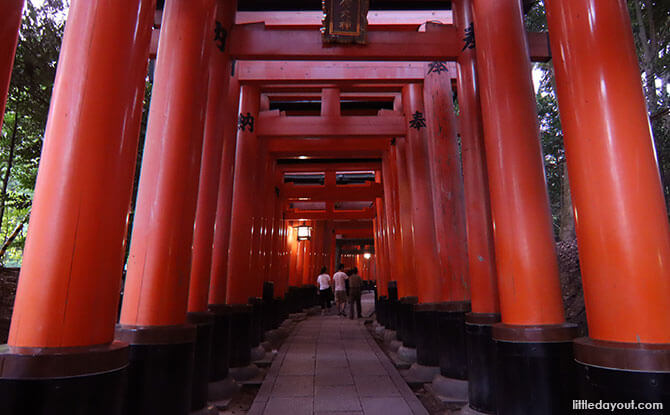 Beyond the main grounds, you will stand before a seemingly unending winding row of red, or more accurately, vermilion torri gates (Shinto shrine gates). 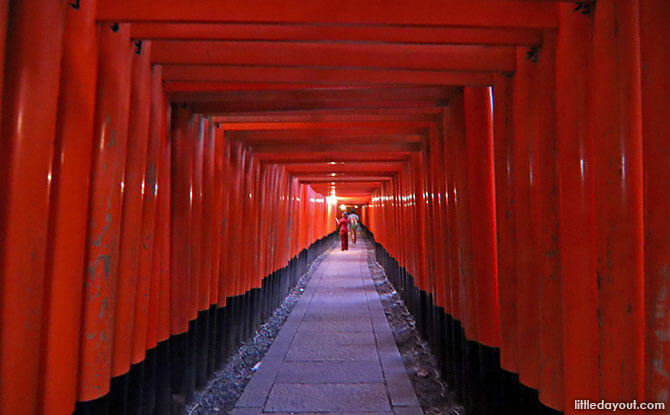 Each torri gate, made of wood, and painted red/vermilion and black, is donated by an individual or a company. 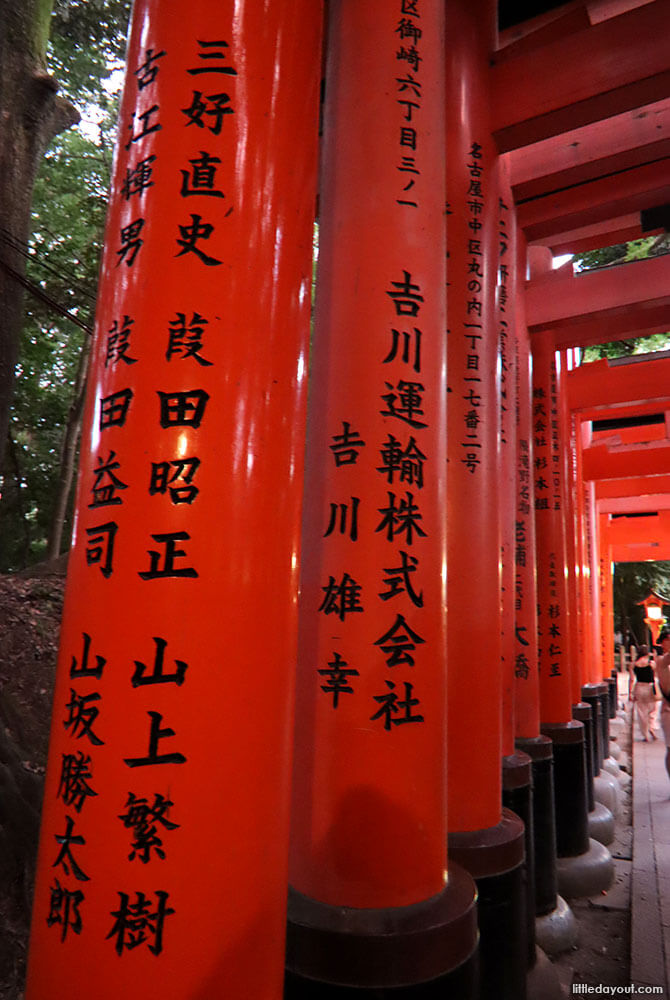 The names of these donors and the dates of the donations are inscribed at the back of each of these gates on the left and right respectively. Besides being known as the god of the rice harvest, merchants have traditionally worshiped Inari as the patron of business. Two parallel rows of gates, the Senbon Torri (“Thousands of Torri Gates”), mark the start of the torri-gate trail.

There is a certain mystique and charm as you walk through the gates. A round-trip hike takes about two to three hours, and brings you past smaller shrines spanning 5 km on the mountainside.

About 30 to 45 minutes halfway up the mountain, where the torri gates are spaced further apart, you can take in the magnificient views of southern Kyoto and even Osaka in the distance. Thereafter, a circular trail leads you to the summit and back to the mid-point. Of course, you can choose to turn back at any section of the gates along the way.

If you are there with the kids, challenge them to the ultimate torri gate experience. Ask them to count and see if there really are thousands of these gates at the most famous and most important Inari Shrines! 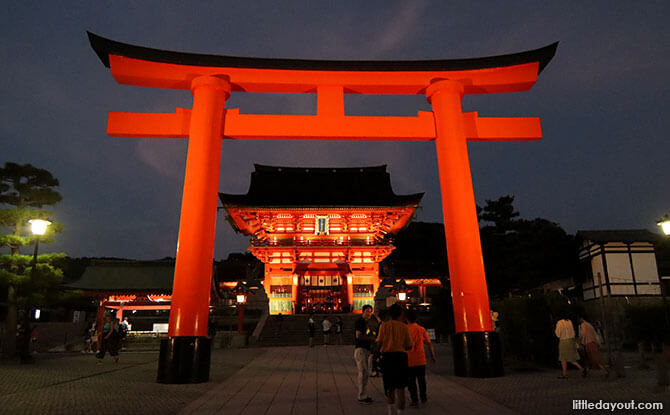