Located at the westernmost end of Sentosa, Fort Siloso is built on top of a hill once known as Tiger Hill in Malay. This position provided fierce, commanding views of the waters to the South of Singapore, as well as views of Keppel Harbour. It is the only preserved coastal fort in Singapore and one of four military forts that were built on Sentosa.

An Introduction to Fort Siloso’s Past 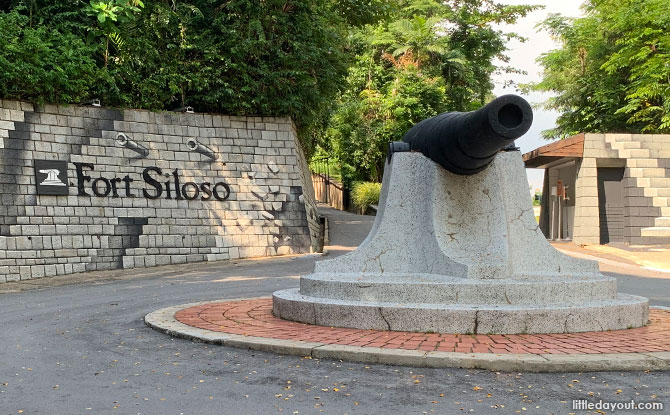 Work on Fort Siloso started in 1878 and over the years, the Fort was expanded and enhanced. As late as 1941, work was still being carried out on a Fire Director Tower at Siloso Point.

During the Japanese Occupation, Fort Siloso was used as a Prisoner of War camp. After the war, it was reoccupied by British forces before being handed over to the Singapore government in 1967.

The fort was designated a historical site in 1972, when it was decided that the island called Blakang Mati would be redeveloped as Sentosa. A popular myth says that Fort Siloso’s guns were facing the wrong way and did not take part in the Battle of Singapore during World War 2. However, that is not true. The guns at Fort Siloso did see action in the defence of Singapore. However, they did not have much impact as their rounds were intended to be used against ships as opposed to troops.

There are many guns on display around Fort Siloso. Among these are captured Japanese guns as well as some more ancient ones.

Visiting Fort Siloso: What to See & Do

Today, Fort Siloso is an interesting place to visit. You can wander about and imagine what life was like in the past at this British military garrison. 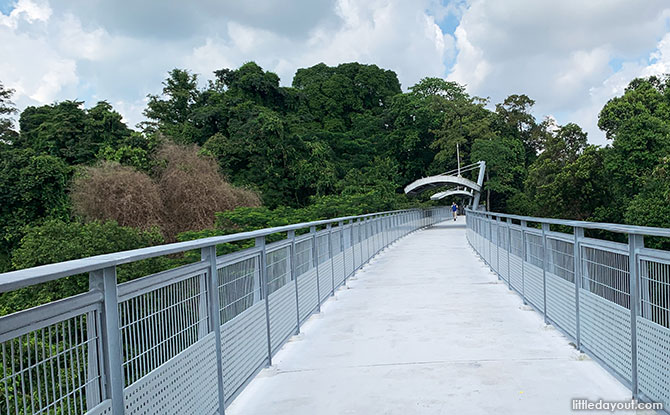 Visitors can take a lift up to the Skywalk. It is a five-minute walk along the 181-metre elevated walkway to Fort Siloso. Visitors start their visit at the upper levels of the Fort and work their way downwards.

One of the interesting things about Fort Siloso is that has three tunnel systems. These were used to store the ammunition used for the fort’s coastal defence guns.

The first, Tunnel C, can be explored at the peak of Fort Siloso, where you first arrive at if you take the Siloso Skywalk.

There are two two trails at Fort Siloso – the Heritage Trail or the Gun Trail. The Heritage Trail takes visitors around the various buildings of the Fort. The Gun Trail is a tour around the different type of guns and cannons on display at the Fort.

For the general visitor who would like to find out more about the Fort, we would recommend the Heritage Trail. From the arrival point from the Fort Siloso Skywalk, head straight and climb the stairs to the Battery Command Post. This display, along with others, depicts what it was like when Singapore was at war.

Notice that on the wall, the calendar shows the date as 14 February 1942, the day that Singapore fell in World War 2 to the Japanese. The Heritage Trail then leads on to Fort Siloso Square, the main parade square. To the left of Fort Siloso Square are the Casemates. Step inside for an exhibition about World War 2. 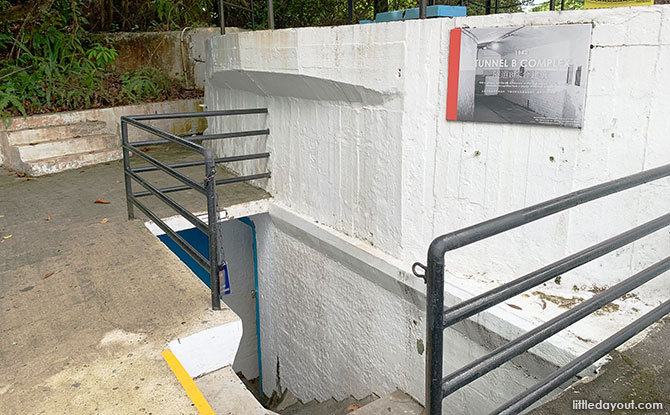 The Siloso Tunnel B Complex is just off to the side of Fort Siloso Square. Tunnel B Complex is located below the 6-inch gun battery. 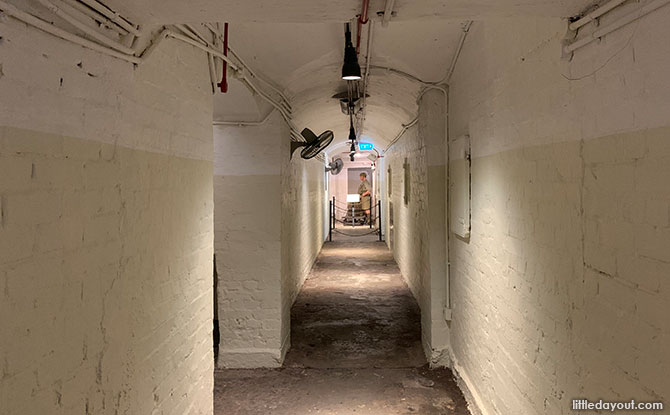 Inside, learn about life for Prisoners of War, such as those who were held at Fort Siloso. There is also display showing how ammunition shells were hoisted from the bunker up to the gun above.

Carrying on downhill where the Store and Engine Room buildings are located. These contain exhibitions about Force 136, a special military force, and life during the Occupation.

Next to the Store and Engine Room buildings is the entrance to Tunnel Complex A. 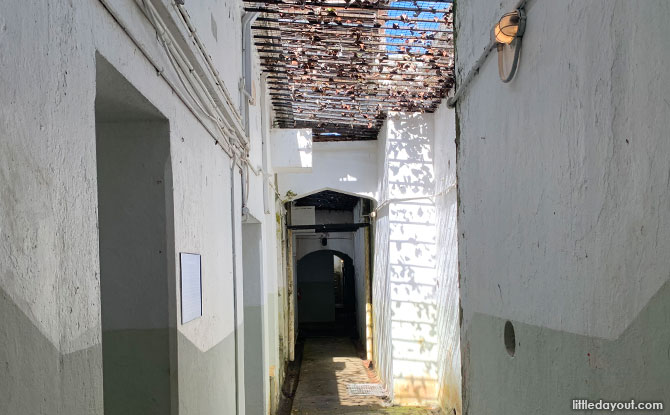 The tunnel’s long passageways lead down to the cliff face at Siloso Point and the Fire Director Tower. Once again, there is a sound track which provides a tiny glimmer of what it must have been like in 1942 when Fort Siloso saw action. 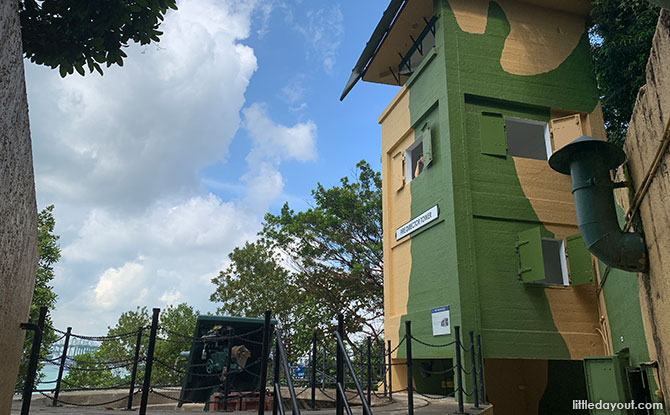 At Siloso Point, you get to see the Fire Director Tower which was used to control where the guns would be firing. Pop into the Watch Shelter too, a re-creation of a room used by soldiers in 1942 that is filled with items from that period. As you leave Tunnel Complex A, stop at the POW Garden to learn more about what people ate during the Japanese Occupation of Singapore.

Next along the trail is the Surrender Chambers. The Surrender Chambers contains wax figures that show two surrenders that took place in Singapore. The first is that of the British surrender to the Japanese, which took place at the Former Ford Factory at Upper Bukit Timah Road.

The second is of the Japanese surrender back to the British in 1945. From the Surrender Chambers, head toward the Guardroom where there is a Union Jack flying on the flagpole outside.

This next section of the trail takes you back to the 1880s and provides a look at what life was like for a British soldier stationed at Fort Siloso.

Go through the Guardroom and make your way up the wooden ramp behind it. As you walk up the hill, imagine what it must have been like for the soldiers and coolies who had to parbuckle (a method of hauling items uphill) cannons and ammunition up the hill by muscle power alone. Inside the buildings on this part of the trail, there are scenes showing the arduous 60-day journey that it took from Britain to Singapore in 1885. 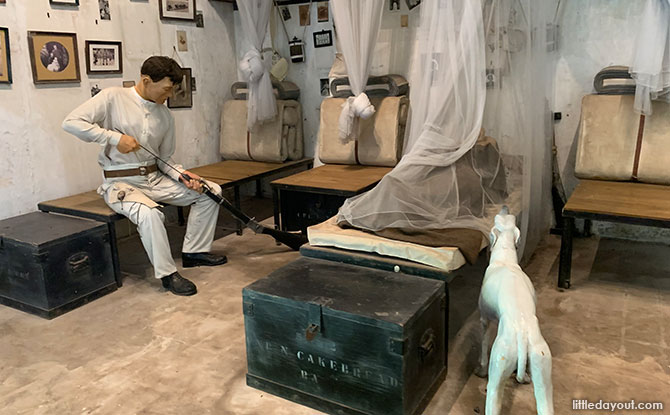 There is also mock-ups of the living quarters for soldiers and scenes from daily activities.

Waves of the Straits

From the living quarters, take the path back down to the bottom of the hill to pay a visit to Waves of the Straits on the way out of Fort Siloso.

These are a set of murals painted by Singaporean artist Yip Yew Chong on to the sides and road at Fort Siloso. These are trick-eye murals that you can pose with. You may even be able to spot the fabled lion that gave Singapore its name!

Fort Siloso provides an interesting look at life in a colonial coastal defence fort in the late 1800s and the first half of the 20th Century.

It is a world apart from the rest of the bustle of Sentosa and a must-visit for military buffs or those interested to learn more about Singapore’s history. We hope you have a blast there!