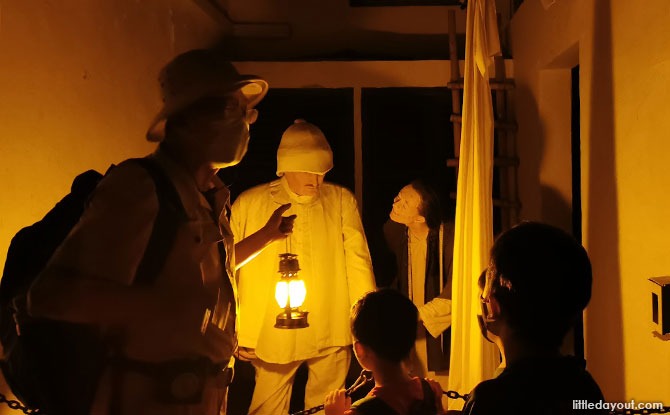 If you have visited Fort Siloso, it is likely that you visited it in the day. How about Fort Siloso at night?

We joined Sentosa and Tour East’s guided tour at Fort Siloso as a family for a different perspective of what it may have felt like in the darkness of the war.

What is Fort Siloso?

One of Sentosa’s four military forts, Fort Siloso is the only well-preserved coastal fort that is open for visitors. Its underground complex, casemates, tunnels, guns give us an insight of what fortification was like during World War 1 and World War 2.

There are a few galleries at the military museum such as WW2 memorabilia, video documentary, pictures taken during the war, wax figures at the Surrender Chambers for visitors to learn about the war. 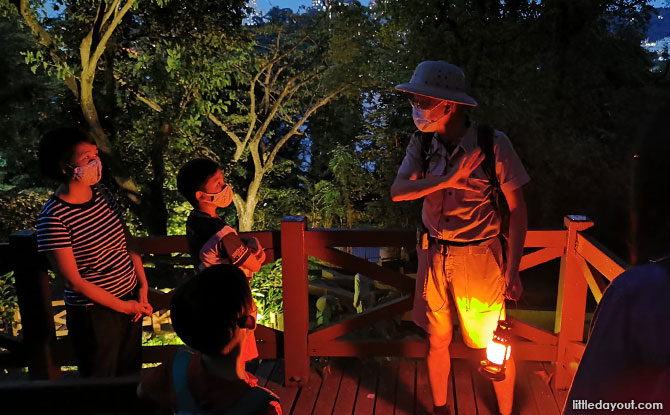 The 1.5 hour Night Experience at Fort Siloso was conducted by Tour East and would lead us through a realistic experience resembling the dim setting the soldiers were in during the war.

We were pleasantly surprised when we saw the guides decked in WW2 military uniforms, the main guide Peter was holding a kerosene lamp. After we gathered at the Fort Siloso skywalk entrance, a minibus took us to the heart of Fort Siloso where the tour commenced.

Past the Wave of the Straits, we went to the Fort Siloso Square and promptly told we were now British Soldiers about to embark across the East Indies to Singapore. We were introduced to parbuckling, a pulley system to hoist military equipment up and down the slope. This important mechanism helped to transport the heavy equipment around the fort. 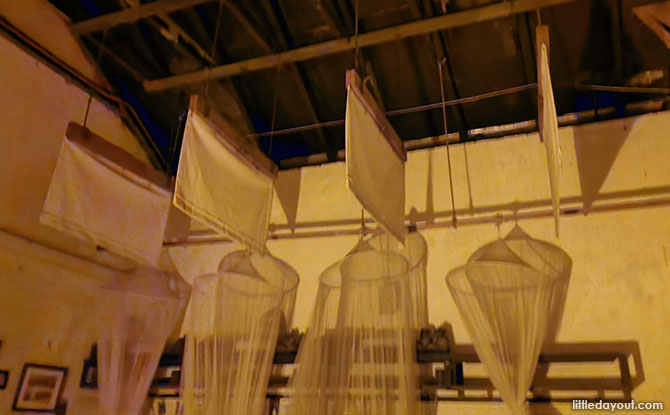 Then we “boarded” a ship that would resemble the living conditions on a ship bound for Singapore in 1880s. The trip would have taken over 50 days in cramped conditions and unhygienic practices. We also saw the barracks and the officer mess, where coolies and dhobis helped with cooking, washing of laundry, even fanning the soldiers to keep them cool using suspended pieces of cloth. 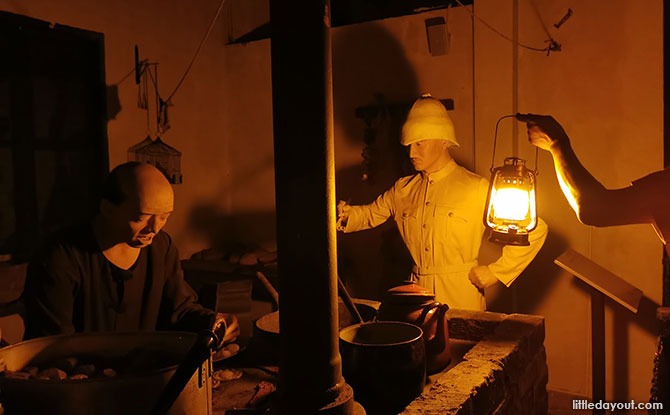 Bearing in mind there were no sophisticated machinery in those days such as washing machines or electric irons, everything had to be done by hand. It was especially insightful for the digital natives who have grown up to having everything automated.

Experiencing the Darkness of the War 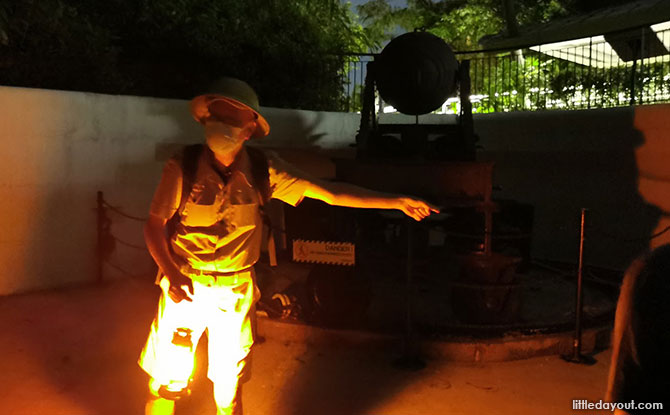 We saw the big guns, magazines and the myth of how the guns were pointing at the wrong direction leading to the fall of Singapore. The guns could be rotated and were effective in sinking enemy ships as well as destroying the oil storage. Peter, our guide, shared that there were a multitude of errors that resulted in the fall of Singapore, mainly due to poor military strategy, communication and lack of intelligence as compared to the Japanese. 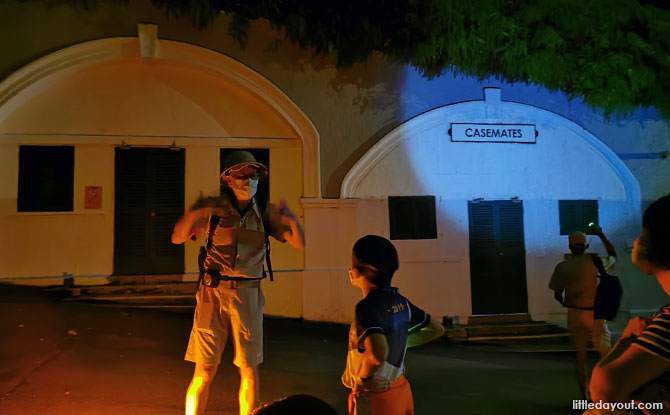 The casemates were built with vegetation above to cushion the impact of any falling bombs or attacks and the vegetation also helped to camouflage Fort Siloso in the thick of the war. Apart from storage of equipment, this was where rations were stored in case cookhouses were incapacitated.

As we entered the casemates, we could experience walking through a corridor in pitch darkness. The accompanying of planes overhead was a tiny glimpse into what soldiers would experience during war where all was dark and grim.

The underground complex was where the soldiers were on standby duties and to manage the ammunition and supplies. There were also special shafts to help with the moving of equipment to the top where the guns were.

Surrender Chamber and Peace at Last 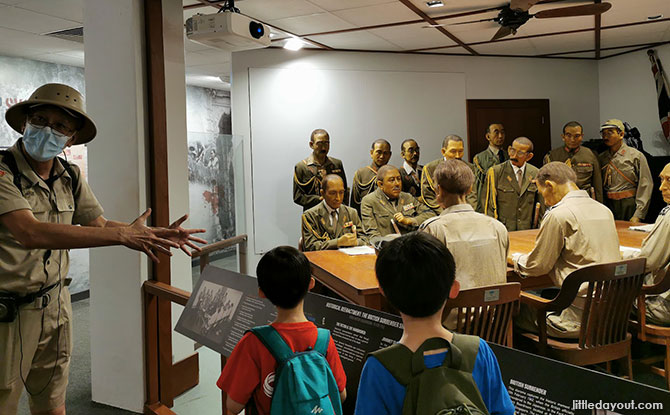 After getting accustomed to the darkness, we were escorted to the Surrender Chamber where it was brightly lit. The gallery showcased wax mannequins of the Japanese and British soldiers signing surrender documents on 15 February 1942. Key figures like General Yamashita and Lieutenant-General Percival can be clearly identified. 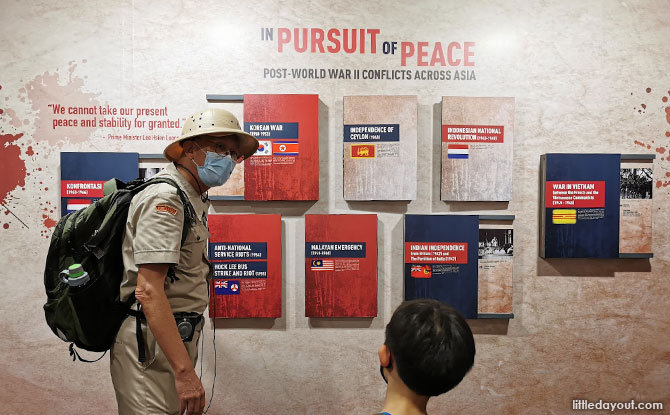 We also saw the scene of the momentous part of the Japanese surrendering, and British representatives together with representatives of allied forces including those from India, Taiwan, America. It was timely that Peter shared the cost of peace, and how we must remember the importance of peace.

Did you know that Sentosa means peace and tranquillity in Sanskrit? Perhaps that can be achieved through remembering the unpleasant history and wartime atrocities.

The tour then ended at Yip Yew Chong’s “Waves of the Straits” mural, where we could take some photographs. 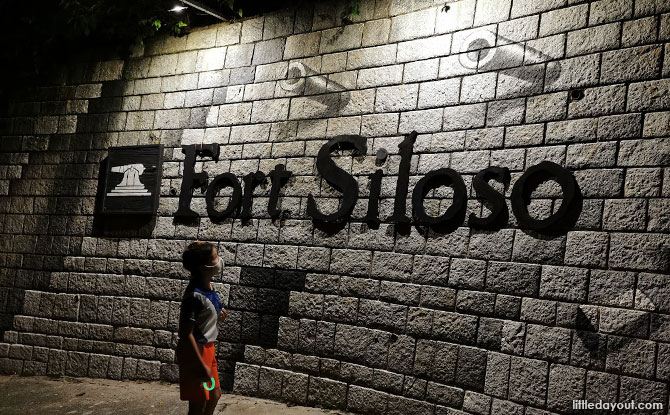 Our guide Peter was a very humorous and engaging guide and he made the experience come alive with his uniform, lamp and a cheery narration of the grim topic. He also shared his own experiences as a soldier in the 70s contrasting that of a life of a British soldier.

One and a half hours flew by and I felt it was a whirlwind tour due to the 2nd tour group waiting for their turn. It was difficult for Peter to answer too many questions or go in depth into more of the happenings pre-war.

Nonetheless, my boys certainly had their fill of the war. Being naturally attracted to guns, combat and soldier life, they were very engaged during the guided tour.