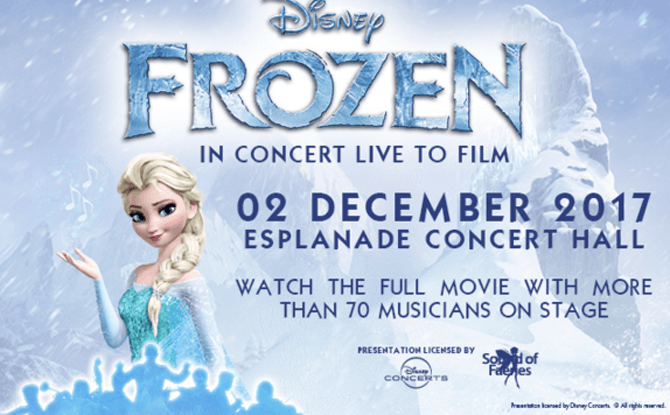 Relive Elsa, Anna, Olaf, and Kristoff’s beloved adventure with a live orchestra and choir performing the music while you watch the entire movie with its dialogue on a giant screen.

We can never have enough of Frozen and its fantastic music, starting with the Academy Award®– and Grammy Award®–winning hit song “Let It Go.” And soon, you can enjoy a brand-new thrilling experience by watching the full movie as a cinema concert this December in Singapore. More than 80 live orchestra musicians and choir singers will bring the beloved soundtrack to life on the stage of the prestigious Esplanade Concert Hall. As the musicians perform in perfect synchronization with the movie projected on a giant screen, with its dialogue and sound effects, the perfect acoustic of the venue will make the soundtrack resonate like never before in Singapore!

In Frozen, the fearless optimist Anna sets off on an epic journey—teaming up with the rugged mountain man Kristoff and his loyal reindeer Sven—to find her sister Elsa, whose icy powers have trapped the kingdom of Arendelle in eternal winter. Encountering Everest-like conditions, mystical trolls, and a hilarious snowman named Olaf, Anna and Kristoff battle the elements in a race to save the kingdom.