Home Play Children’s Season at National Museum of Singapore: 5 Ways to Connect With... 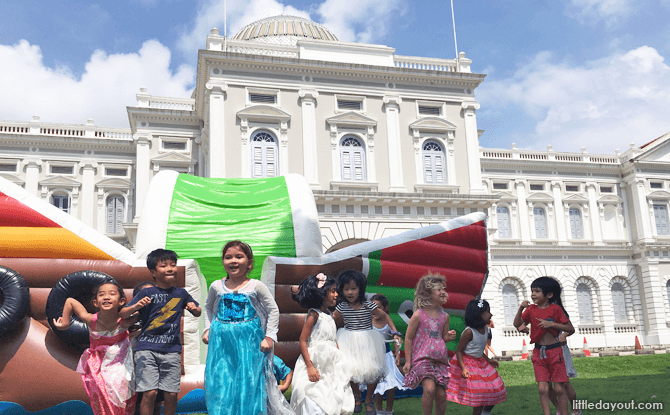 From Saturday, 27 May onwards, kids can look forward to fun and engaging activities at Children’s Season 2017 at National Museum of Singapore. Riffing on the theme of connections, many of the exhibits and installations at the Museum are transport-related, highlighting the physical connections amongst people.

Here are five activities you can connect with at Children’s Season at National Museum of Singapore. 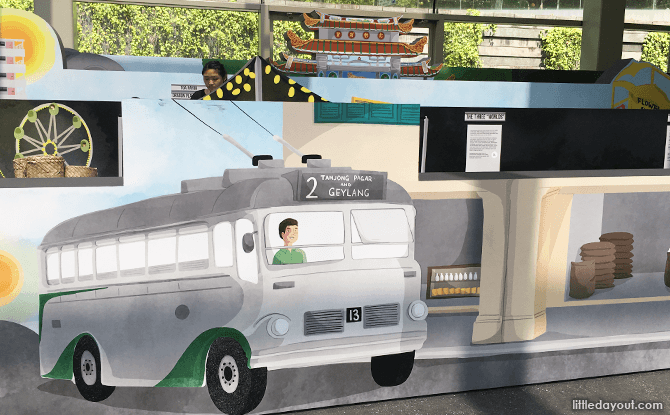 This year, National Museum of Singapore has collaborated with the authors and illustrators behind The Little Singapore Book to create two activity trails for young children.

The Little Singapore Book is written by local authors Sim Ee Waun and Joyceline See Tully and illustrated by Diane Ng Rose, to present Singapore’s story to children between 5 to 10 years old.

Scenes from the book have been lifted off the page and made into two trails. 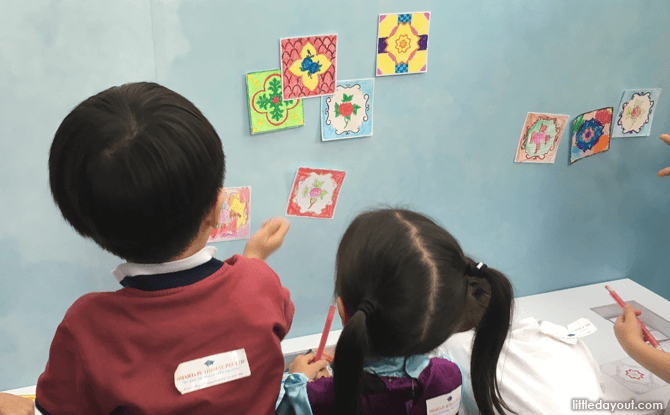 On the trail, kids can participate in activities such as decorating Peranakan tiles and creating their own heritage towns.

Also represented on the trail are Singaporean landmarks such as Singapore Botanic Gardens (where they can take a whiff of plants such as lemongrass and ginger) and Haw Par Villa, a favourite haunt of yesteryear.

The second trail takes little ones back to where it all started – the Singapore River.

Duck under the Clifford Pier archway and butt into a “bumboat” based on the illustrations found in The Little Singapore Book. They can also visit historical landmarks found along the Singapore River. At the former General Post Office (now Fullerton Hotel) activity station, they will need to get busy sorting mail. 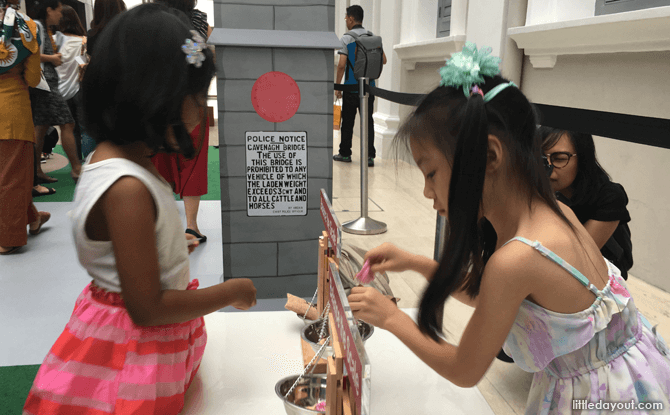 Beside a kid-sized Cavenagh Bridge, there are weighing scales to measure out 3 catties, the weight limit the bridge can take. In a nod towards the street wayangs of yesteryear, kids can stage a puppet performance behind a façade of The Arts House at The Old Parliament, and take part in other activities.

3. The Giant by Jean Jullien Tip-toe down to the basement where a sleeping blue giant snores in deep slumber.

The Giant is intended to be a canvas for parents and kids to doodle on. Using the markers provided, families are encouraged to get creative and have fun with the license to draw freely. Just don’t make too much noise in case you wake the giant up! For ages three and up.

4. The Soft Dome by Atelier YokYok This installation for Children’s Season at National Museum of Singapore is slung out under the Rotunda. The Soft Dome is a mirror-reflection of the Museum’s iconic dome. Parents and children can crawl on to the dome, lie down on the mesh netting and take a good look at the stained glass dome and building architecture above them. The Soft Dome is intended to allow parents and children to gaze up and connect with the building’s architecture, and with each other.

Footware must be removed before entering the dome and socks need to be worn for hygiene purposes. It is suitable for those aged three and up. Last admission is at 5.30 pm. What would Children’s Season at National Museum of Singapore be without a bouncy inflatable on the Museum’s front lawn. This year, a colourful bumboat inflatable takes pride of place. Such bumboats were once a common sight along the Singapore River. This mode of transportation has been captured in a playground found beside Elias Mall. There is no need to make the journey to Pasir Ris to have fun with it – instead pay a visit to Children’s Season at National Museum of Singapore. The inflatable bumboat playground is open on Saturday and Sundays from 10 am to 12 pm and 4 pm to 6 pm. Last admission is at 5.30 pm and the activity is suitable for those aged 7 and up.

Other Activities at Children’s Season at National Museum of Singapore

During the June school holidays 2017, other activities that families can look forward to as part of Children’s Season at the National Museum include a theatrical production, GosTan Back: A Time Travellng Adventure on Wheels. The ticketed production is designed to be inclusive for all children, including those with additional needs and their families.

There will also be craft and animation workshops, storytelling sessions and tours for families.

Kids can also pick up a My Children’s Season Passport at the museum. They can collect stamps in the passport as they visit various museums and venues participating in Children’s Season Singapore 2017. Collect three stamps to take part in a Stamp & Win! lucky draw.

Get more information on the activities taking place around the other museums and galleries as part of Children’s Season Singapore 2017 here.